GLENDALE, Ariz. — Brad Richardson scored four goals to power the Arizona Coyotes to their fifth straight victory with a 5-2 win over the Vancouver Canucks on Thursday night.

Alex Galchenyuk also scored for the Coyotes, who completed a four-game season sweep of the Canucks.

Vinnie Hinostroza and Richard Panik had three assists apiece — all on goals by Richardson — and Oliver Ekman-Larsson had two assists.

Richardson, who has a single-season career-high 16 goals, scored twice in the first period and completed his second career hat trick in the second period after a deft drop pass from Richard Panik. He tipped in a pass from Hinostroza for his final goal at 8:03 of the third period. It was the Coyotes’ first four-goal game since Keith Tkachuk did it on March 20, 1997. 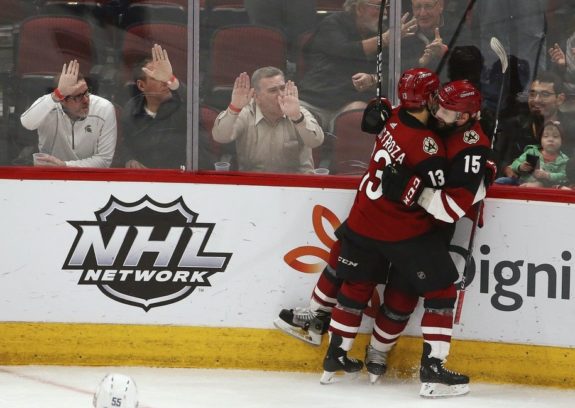 Tanner Pearson and Antoine Roussel scored for the Canucks, who have lost five of six.

Pearson’s goal was 10th this season, and his first for the Canucks since being acquired in from Los Angeles on Feb. 14.

Arizona’s Darcy Kuemper made 37 saves while starting for the 10th time in the last 11 games. He is 7-1 in his last eight.

Thatcher Demko made 19 saves in his second start of the season for Vancouver, his first appearance since a 4-3 home victory over Buffalo on Jan. 18. No. 1 goaltender Jacob Markstrom had played the previous seven.

Richardson’s only other game with at least three goals came on Oct. 23, 2010, while with the Los Angeles Kings. He had 14 goals with Colorado in 2006-07, his first full season and had 12 goals in 47 games with the Coyotes last season.

NOTES: Coyotes forward Derek Stepan was helped off the ice with an apparent left leg injury at 17:29 of the third period after colliding with a Vancouver player. He is third on the team with 13 goals. … Forward Conor Garland played his first game since signing a two-year, $1.55 million contract extension Wednesday that will keep him with the Coyotes through the 2020-21 season. Garland has 12 goals and three assists in 37 games. … The Canucks completed the eighth of their 11 back-to-back sets this season. They are 7-8-1, 3-5-0 in the second game. … Vancouver was 0 for 3 on the power play and has converted only one of its last 21 and two of its last 35 attempts.

Canucks: Finish a three-game road trip in Las Vegas, which has three points in the first two games between the two this season.

Coyotes: Play host to Detroit in the fourth game of a seven-game homestand Saturday. Red Wings defenceman Mike Green had a goal and two assists in the first of two meetings this season, a 6-1 victory Nov. 13.