WASHINGTON — Richard Panik and Alex Galchenyuk each had a goal and an assist, and the Arizona Coyotes became the latest team to take advantage of Washington’s penalty-killing struggles in a 4-1 win over the Capitals on Sunday.

Galchenyuk and Vinnie Hinostroza each scored on the man advantage for Arizona, which snapped a three-game skid in the third game of a four-game trip. Washington has allowed six power-play goals in its last four games.

Darcy Kuemper made 38 saves for the Coyotes, whose top-ranked penalty kill improved to 20 of its last 21 after two kills against a Capitals power play that entered Sunday ranked second in the NHL. 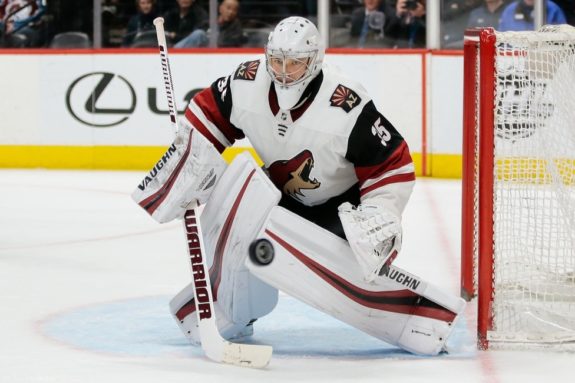 Nicklas Backstrom scored an even-strength goal in the second period for Washington, which ended a five-game homestand 2-2-1. Braden Holtby stopped 18 shots for the Capitals.

Hinostroza put Arizona ahead at the tail end of their second man advantage of the game, sending in a one-time wrister of Dylan Strome’s feed. Panik also contributed on the crisp odd-man rush by the Coyotes, created when three Capitals players were caught up ice trying to score short-handed.

Arizona caught Washington in transition again when Panik beat Holtby above his left shoulder to make it 2-0 just beyond the midpoint of the second period.

Backstrom answered less than a minute later with a one-timer off Alex Ovechkin’s feed from the left corner that left Kuemper little chance.

But the Coyotes made it a two-goal lead again with another power-play goal with 5:22 left in the period. This time, Galchenyuk stood strong to poke in a second effort from just in front of the crease after Brendan Perlini sent the puck toward the net.

NOTES: Kuemper started a third game in four nights while starter Antti Raanta recovers from a lower body injury. Raanta last played on Nov. 2. … Capitals D John Carlson returned after missing Friday’s loss against Columbus with a lower-body injury. … Backstrom has a point in five consecutive games. … The Coyotes have yet to preserve a shutout, but have allowed just one goal in seven games this season.

Coyotes: Conclude their trip on Tuesday night at Detroit.