The beginning of training camps has fans marking the days until Oct. 3. With just under a month until the real action begins, speculation, curiosities and questions are at the forefront. Answers to these burning questions could be season-defining. That’s the criteria I look for when formulating a piece like this. In the first article in this series, we turn to the Atlantic Division.

Is the Bruins’ forward depth good enough to get them past other Atlantic juggernauts?

If the Boston Bruins’ top line of Brad Marchand, Patrice Bergeron and David Pastrnak score like they did against the Toronto Maple Leafs in round one of last season’s playoffs than this question can come off the table.

However, expecting your top line to produce more than 50% of your team’s offence is unrealistic. That’s what the Bruins relied on to beat the Toronto Maple Leafs in seven games but their lack of depth was exposed against the Tampa Bay Lightning. The Bergeron line combined for 26 points in five games against the Lightning, while the rest of the forwards combined for six points (Rick Nash, 3, David Krejci, 2, Jake DeBrusk, 1).

No one is questioning the abilities of David Pastrnak and the top line of the Bruins, but the B’s will need some secondary scoring if they want to go on a long playoff run. (Photo by Maddie Meyer/Getty Images)

There is a considerable discrepancy between salaries as well. Krejci, Bergeron, Marchand, Pastrnak and David Backes all make $6 million or more. Their next highest paid forward is Sean Kurlay with a $1.275 million cap hit.

The Bruins will need some of their younger players, like DeBrusk, Danton Heinen and Ryan Donato to make a difference. All three had successful regular seasons, Bruins fans will be curious to see a full season of Donato in particular. If the depth scoring comes through, the Bruins could be a scary team.

Can the Buffalo Sabres be this season’s Colorado Avalanche?

If you’re the Buffalo Sabres, you have to be looking at the 2017-18 Colorado Avalanche and think why not us?

There wasn’t a soul who predicted that the Avalanche would double their point total and make the playoffs last season, but there might be a few who believe in the Sabres. Colorado was able to qualify for the postseason based on one superb scoring line. With players like Jack Eichel, Jeff Skinner and Sam Reinhart up front, could the Sabres do the same? 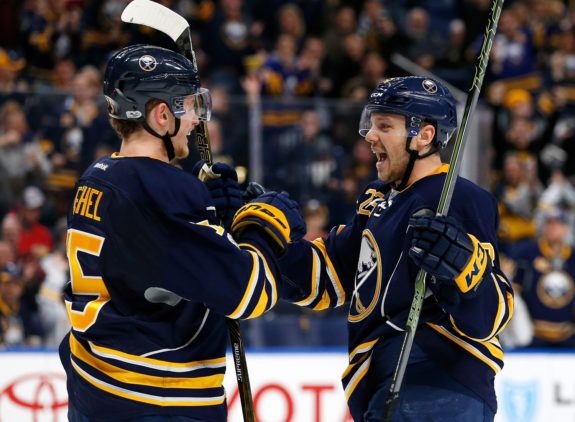 Can Jack Eichel and Sam Reinhart elevate the Buffalo Sabres back into the playoffs? (Kevin Hoffman-USA TODAY Sports)

The Avs also had a rookie second-line centre, Alexander Kerfoot, who put up 43 points. If the Sabres can get that kind of production out of Casey Mittelstadt, call it a win for the organization. The hype for his regular season is high but expectations should be tempered.

We haven’t yet mentioned Rasmus Dahlin. He shouldn’t be expected to be the team’s saviour right off the bat but he immediately makes the Sabres’ defence better. On paper, the team is on the outside looking in but they have the pieces in place to be a surprise playoff team.

How many of their prospects will make an impact?

So far the biggest question about the Red Wings’ upcoming season has been, how will the leadership void be filled in Henrik Zetterberg’s absence? It’s a question I don’t really like asking. The most important young players on the team have been around the Wings’ former captain for multiple seasons and veterans Mike Green, Niklas Kronwall and Jimmy Howard are still on the roster. 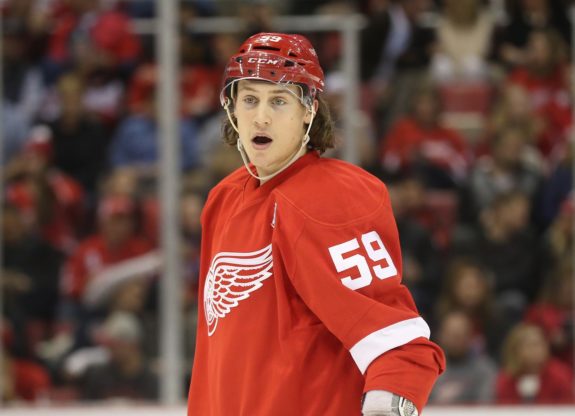 Tyler Bertuzzi is one of the most intriguing Red Wings players heading into training camp. (Tom Szczerbowski-USA TODAY)

What I’m really interested in is which young players will make an impact and how big of an impact will they make? Last season, only Dylan Larkin and Anthony Mantha shone through as promising young, top-six, forwards. Tyler Bertuzzi could play on one of the top two lines after he was on pace for 41 points last season. He scored five goals in his final eight games but also went 27 games without a goal prior to that.

Can the Panthers secure a top-three spot in the Atlantic?

From the All-Star break onwards, no one earned more points than the Florida Panthers. That’s an impressive feat considering that the Bruins and Maple Leafs were also top five in points after the All-Star break.

The problem is that the Panthers ranked 28th overall in the league right up until Christmas. They began to turn the page with a six-game winning streak that started on Dec. 19, but their rise up the standings stalled at ninth in the Conference. 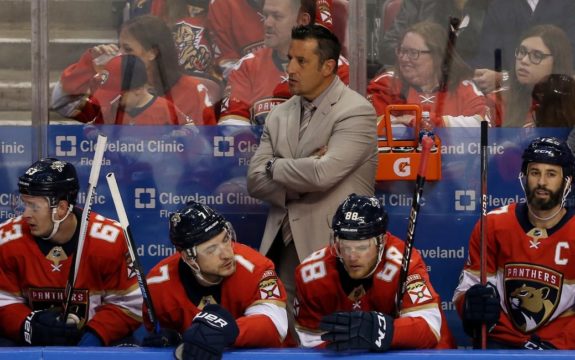 On paper, the Panthers have enough talent to challenge for a playoff spot. They have the trifecta that all teams look for: a number one centre, number one defenceman, and bonafide starting goaltender. They have talented young players making an impact, although their depth up front is questionable.

Still, if the Panthers play like they did from Christmas onwards, they have a shot at unseating one of the division’s big three.

Can Carey Price propel the Canadiens out of Atlantic basement?

Marc Bergevin continued his purge of the Montreal Canadiens’ roster this offseason. Alex Galchenyuk and Max Pacioretty are gone and Max Domi and Tomas Tatar will be on the opening night roster in their place. It’s also worth noting that Shea Weber is out of the lineup until December. After his last game on Dec 16, the Canadiens were the third-worst team in the league, allowing the eighth-most goals during that time frame.

If the Montreal Canadiens are going to make any noise next season, Carey Price will have to lead the charge. (Photo by David Kirouac/Icon Sportswire)

Expectations in Montreal are at an all-time low entering the season. The team doesn’t have the talent on defence or at forward to make the playoffs, meaning that the hopes of their season ride on the shoulders of Carey Price.

The Anahim Lake, B.C. native will have to put this team on his back and put together another Vezina-worthy performance in order to give the Canadiens a shot at making the playoffs. Through injuries and a spotty defence, Price wasn’t at that level last season. He’s paid the big bucks to play like one of the best goalies in the world and Montreal will need every ounce of his skill set this season.

How will the Erik Karlsson saga conclude?

Although this question might be answered before opening night, it is looming over the Ottawa Senators’ camp like a black cloud. After all of the drama and intrigue this offseason, Erik Karlsson will head into Senators camp as a member of the organization.

How long he remains a Senator is a mystery. Like most deals of this magnitude, it will either happen before opening night or close to the trade deadline. If the Senators plan on dealing Karlsson, they better get it done soon. The longer they try and soldier on with Karlsson, the longer they delay the inevitable.

Sens fans shouldn’t worry too much about the upcoming season. After owner Eugene Melnyk’s video about the future of the organization went viral, reactions ranged from uplifted to inspired.

Can the Lightning win it all?

From the Sens to the Bolts, we now enter the opposite end of the spectrum.

On paper, there’s little to nitpick about when it comes to the Lightning. They have two of the league’s top offensive forwards in Steven Stamkos and Nikita Kucherov. They have tons of scoring depth with Yanni Gourde, Alex Killorn, J.T. Miller, Ondrej Palat, Anthony Cirelli, Brayden Point and Tyler Johnson. Their stellar defence is led by the league’s latest Norris Trophy winner, and they have one of the NHL’s best young goalies minding the crease. 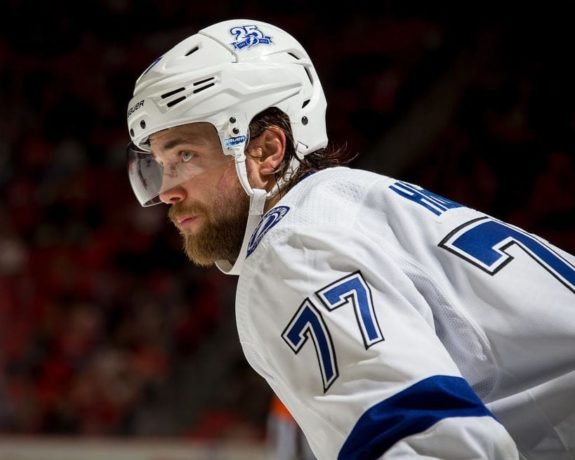 2018 Norris Trophy winner Victor Hedman headlines the roster for one of the league’s deepest teams. (Photo by Dave Reginek/NHLI via Getty Images)

From top to bottom, former general manager Steve Yzerman has crafted one of the deepest rosters in the league. Though Yzerman recently stepped down, the product on the ice remains the same. His craftsmanship resulted in a trip to the Conference Final last year, and the Bolts will be looking to take it a step further this season. Is this the year that Stamkos, Kucherov, Hedman and Andrei Vasilevskiy lead Tampa back to the promised land?

Can their defence withstand a lengthy playoff run?

With the addition of John Tavares via free agency, no one can match the Maple Leafs’ trio of centres. The Leafs and their 270 goals were already the third-highest scoring team in the league last season and no one will be surprised if they score the league’s most goals in 2018-19.

The question is, will the offence be enough to offset the defensive issues when it matters most? Even though most of the Leafs’ top prospects are defencemen, they didn’t make any substantial moves in the offseason to fix that hole. On the right side, the Leafs are still going to rely on the trio of Ron Hainsey, Nikita Zaistev and Connor Carrick.

Frederik Andersen was able to mask some of the Maple Leafs’ issues on defence last season. (Tom Szczerbowski-USA TODAY Sports)

Goalie Frederik Andersen was an integral part of bailing out the Leafs’ leaky defence. During the regular season, the team allowed the tenth-most scoring chances at 5-on-5 but ranked 18th in goals-against. Despite Andersen’s best efforts, he couldn’t mask the Maple Leafs’ defensive issues in the postseason. His team allowed the third-most scoring chances per 60 minutes at even strength which translated to the fourth-most goals per 60.

General manager Kyle Dubas and the organization have a long-term plan for the backend, drafting four defencemen with their top two picks in the last two drafts. For the upcoming season, however, they’re hoping the addition of Tavares will mean that the Leafs spend the majority of their time in the offensive zone. While not the safest of bets, it’s a strategy that might work.

Riveters’ Tatiana Shatalova: From Belarus to the Metro

How Eric Staal’s Legacy will Impact the Sabres Future

Maple Leafs Who Are Battling for Roster Spots