The Week That Was: A Mixed Bag

The Barracuda took three out of a possible six points in a tough week. A short-handed San Jose side was thumped again against the San Diego Gulls with most of the firepower up with the Sharks. The weekend series against the Tucson Roadrunners allowed for a rebound, taking three of four points in southern Arizona.

The Barracuda were as depleted as they have been all season in a showdown between two of the top teams in the AHL. It was also the second straight game for San Jose in which over 100 penalty minutes were handed out.

San Diego got out to a 3-0 lead on goals from Brian Cooper and two goals from Shea Theodore, currently stuck in the AHL due to the logjammed blueline on the Anaheim Ducks.

Tim Heed scored his 13th goal of the season early in the third period on the power play.

Heed activated from the point and took the puck on his backhand before a quick snap shot beat Dustin Tokarski for the only Barracuda goal. The Gulls went on to net a pair, one each from Scott Sabourin and Kalle Kossila, to handily beat the Barracuda, despite San Jose winning on the shot clock 37 to 27.

The last 64 seconds of the game turned into a penalty filled mess with 104 penalty minutes doled out between the two squads before the game mercifully concluded. Alex Gallant was right in the thick of it.

On an emotional evening with Roadrunners captain Craig Cunningham dropping the ceremonial first puck, the Barracuda showed how dangerous they can be when their line-up is (more or less) intact. 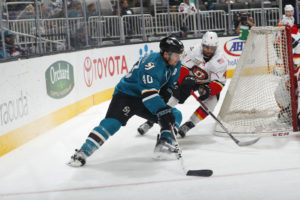 Ryan Carpenter scored his tenth of the year on a first-period power play to became the 12th Barracuda to hit double-digits in goals. The Barracuda defense was stout in the opening frame, allowing a single shot on goal in the first 20 minutes of action.

The Roadrunners took the lead off goals from Branden Troock and Eric Selleck just over three minutes apart. The lead would not last as the Barracuda answered back with a shorthanded breakaway from Rourke Chartier to tie the game.

Carpenter’s second of the game gave the Barracuda a lead they would not relinquish. San Jose added two power-play goals from John McCarthy late in the second and Mirco Mueller early in the third. Troy Grosenick only needed 16 saves for his 27th win of the year, tying with Tristian Jarry for second in the AHL.

If the game 19 hours before was a testament to the skill of the Barracuda, this match was a showing of their faith in the system. The Roadrunners managed four goals in less than nine minutes before the Barracuda found their legs.

Despite another shaky performance by Mantas Armalis, the Barracuda scored the next four goals to tie it up as Barclay Goodrow took the team on his back and almost single-handedly stole a point for San Jose. Goodrow scored short-handed goals in the second and third periods and had an assist on Joakim Ryan’s power-play tally at 10:55 in the final period. With Armalis pulled for the extra attacker, Goodrow scored the game-tying goal, completing his second hat trick of the 2016-17 campaign.

In the shootout, Connor Garland slid home the game-winner, but it was a gutsy performance by San Jose to find a way to steal a point.

Oddly, the weekend series in Tucson did not feature a five-on-five goal for the Barracuda. Of San Jose’s nine goals, four were on the man advantage, three were shorthanded, one was four-on-four and Goodrow’s final goal of the series was with six attackers.

Reinforcements Arrive or Soon Will

The Sharks signed Noah Rod, their second-round pick in 2014. Rod fought his way through an injury-plagued season with Genève-Servette in Switzerland’s top league and completes the trifecta of “Swiss Mafia” members in the Sharks’ organization with Mirco Mueller and Timo Meier. Rod is still a bit away from his North American debut.

Tim Clifton skated in both games against the Roadrunners, primarily in a bottom-six role as he adjusts from the NCAA to the AHL. He will likely compete with Colin Blackwell for the fourth center spot on the roster.

Saunders’ signing accomplishes two things: First, Saunders gives the Barracuda a third goalie for the playoff push, allowing Grosenick rest down the stretch; Second, he provides some competition for Mantas Armalis, who has struggled of late in spot starts and currently has a .885 save percentage. Armalis does have a solid record of 12-5-4, so the battle could be a good one for the backup job.

The Barracuda fell out of the top spot in the AHL in terms of winning percentage. The Wilkes-Barre/Scranton Penguins .709 edged out the .708 Barracuda. However, San Jose remains atop the Pacific Division and their first round opponent, the Bakersfield Condors, are cementing their spot in the Calder Cup playoffs.

On the Schedule: A Pair Against the Moose at Home

The Barracuda will have a long week of practice before the Manitoba Moose arrive on Friday for a couple of games. San Jose is 2-0 so far this season against the Moose, with 4-1 and 5-4 victories back on Feb. 3 and Feb. 4 during the Barracuda’s big 13-game winning streak.