These are just a few of the reasons why author Tim Sullivan called the 1994 Eastern Conference Finals between the New York Rangers and the New Jersey Devils the best in NHL history. For 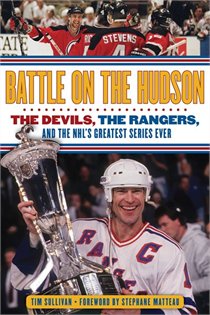 Sullivan, who covered the Devils in 1994 and is now the Associated Press’ East Sports editor, the idea for the book went far deeper than just writing about one of the two teams.

“I wanted to write about a turning point in New York hockey,” Sullivan said in an interview with The Fischler Report. “I really wanted to portray two franchises that couldn’t be more different from each other, yet so close to each other geographically.”

The Rangers, under new head coach Mike Keenan, steamrolled through the regular season en route to a 52-24-8 record and their second President’s Trophy in three years. With Keenan at the helm, the Rangers played an up-tempo game, a contrast to the style they played under their previous head coach, Roger Nielson.

The Devils had the second best record in the league in 1993-94, finishing the regular season with a 47-25-12 record. Like the Blueshirts, New Jersey had a new coach behind the bench, Jacques Lemaire.

The former Canadiens legend was the Devils fourth coach in four years, yet even though New Jersey made the playoff in each year under Lemaire’s three predecessors, it was Lemaire who would take the Devils to the next level.

“General manager Lou Lamoriello told Jacques to do whatever he needed to do to make the Devils successful, and he translated that on the ice instantly: a defensively sound system where they took care of the puck, protected their own end and goaltender, and forced the other team to make mistakes,” Sullivan explained.

“Today, the Devils still rely on that sound defensive system, and the success the organization has had over the last 20 years is a credit to Jacques.”

It also didn’t hurt that the future of the Garden State franchise emerged in 1993-94. Martin Brodeur won the Calder Trophy, and the 22-year-old would elevate his play in the Eastern Conference Finals.

The teams not only played different styles, they also took different routes to the Eastern Conference Finals. The Rangers breezed through the first two rounds in a combined nine games. On the other hand, the Devils played seven games in the first round, then rebounded from losing the first two games at home in the Semifinals to beat the Boston Bruins in six games.

Sullivan took a look at each of the seven games of the series on a game-by-game basis. The series had its classic moments right from the outset.

The Devils tied Game One with less than a minute remaining in regulation, and wound up winning the contest in double overtime. After the Rangers tied the series with a 4-0 win in Game Two, they won Game Three in the Meadowlands on a Stephane Matteau goal in double overtime.

New Jersey responded with wins in Games Four and Five, and had a chance to eliminate the Rangers in New Jersey in Game Six. It has been well-documented what would take place next.

The Rangers-Devils series will be remembered for Mark Messier’s “guarantee”, and Sullivan wrote about the press conference in which Messier made the statement. However, Sullivan explained that at the time, Messier’s statement was not a “stop the presses” moment.

After practice on the off day between Games Five and Six, Mark Everson, who at the time covered the Rangers for the New York Post, asked the Rangers captain, “What has to happen here (to force a Game Seven)?”

“It’s one of those stories that could only happen in New York. And the rest is history.”

After trailing 2-0, and being thoroughly outplayed by the Devils, the Rangers rallied for four goals, with Messier scoring the final three in the third period to record a natural hat trick. The 4-2 Rangers win sent the series back to Madison Square Garden for Game Seven.

In Game Seven, the Blueshirts jumped out to a 1-0 lead on a spin-o-rama goal by Brian Leetch. The defenseman’s tally would be the only goal of the contest until the game’s final seconds.

With 07.7 seconds remaining, Valeri Zelepukin tied the game by whacking the puck past goalie Mike Richter. In frustration, Richter pinned referee Bill McCreary along the boards, and argued that McCreary should have blown the whistle.

Even if the Rangers goaltender was right, a few pundits believed that Richter deserved a penalty on the play.

“The Rangers definitely caught a break, there’s no question about it,” Sullivan proclaimed. “In fact, Mike confirmed to me that McCreary told him on the ice, ‘You owe me one.’”

For the third time in the series, the Rangers and Devils would head to double overtime. Although both teams had terrific scoring chances, it would be a fluky goal that would end the series.

At the end of a shift, the Rangers’ Stephane Matteau picked up the puck to the left of the Devils net. Matteau skated behind the cage, and while he was hooked by New Jersey’s Scott Niedermayer, Matteau slid the puck towards the front of the net. The puck found its way between Brodeur’s pads and into the net.

The seventh and deciding game has been referred to as one of the best games in NHL history. It was a fitting climax to a series that put players through every emotion possible. “My feelings are, it’s the greatest hockey game that I was ever involved with,” linesman Kevin Collins said. “I worked 12 Stanley Cup Finals and nothing came close.”

The Rangers would ultimately win the Stanley Cup in 1994, defeating the Vancouver Canucks in seven games to end their 54-year drought. The Devils would go on to win the Stanley Cup the following season, as well as in 1999-2000, and 2002-03, and many players referred to their loss to the Rangers as a motivational tool to reach the next level.