The St. Louis Blues and their fans don’t have much to complain about lately. The team is 9-3-1 in their last 13 games played, have points in seven of their last eight road games, and have been steadily increasing their goals per game (GPG) averages thanks to more balanced scoring.

With the league’s highest percentage of key-man-games missed due to injury (420.69 IIT-CFRel%, 2. MTL- 386.84) it’s amazing that the team is even within reach of their 3rd Central Division title, so things are looking good in the Gateway to the West. However, the team still has one glaring problem and it’s a lack of killer instinct.

Why Finishing Off Teams is so Important

Though the Blues have been much better at winning, or at least gaining the valuable 2nd point, in close games over the last couple of seasons, the team still struggles with cramming the accelerator to the floor to finish teams off and not giving them hope of a comeback.

Sunday night’s game in Minnesota was the latest installment in the ‘Blues give their fans a heart attack’ series, as they watch another three-goal lead (almost) disappear late in the 3rd period, and showed that this problem still needs to be addressed. Teams who don’t let up leads tend to go deeper in the postseason, as they can protect their offense with shut down defense to get those precious W’s to help secure playoff series. 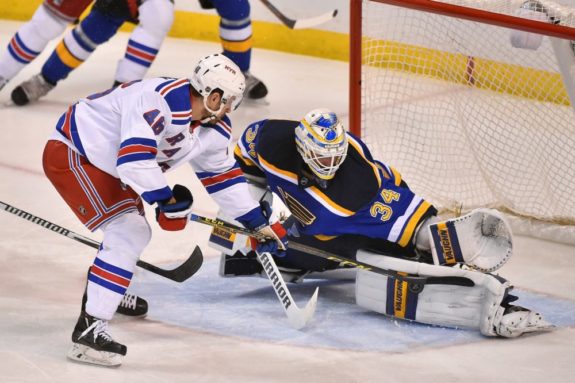 A player should not be this wide open in front of your net, especially in the 3rd period of a close game (Jasen Vinlove-USA TODAY Sports).

The Blues defense is among the best in the league as a whole, but their consistency has been questioned as they seem to stop moving their feet when the team is up a couple of goals (or more). Though much of these struggles actually come from lax back-checking forwards who lose/miss assignments as (Dmitrij Jaskin did against Ryan Suter Sunday), the team as a whole needs to make sure their on-ice communication stays high, especially when they have a lead. That way their opponents never see any light at the end of the tunnel, and the Blues secure a solid victory to build off of moving forward.

Over the aforementioned 13-game stretch (where the Note have gone 9-3-1) the team has actually kept things much closer than the team or fans would like, including different comeback situations (by opposing teams) in seven of the nine wins. Though the opposition has been chock full of high caliber teams clawing for playoff positioning, the Blues have let their foot off the gas pedal too often and it has given their opponents too much life in almost every occasion.

In the nine wins the Blues have racked up over their last 13, those seven close games saw at least a one-goal lead squandered, including four, three-goal leads turn into ties or one-goal affairs. In the remaining three wins (of the seven in question) the Blues actually let one, and two-goal leads slip, but were able to pull out two overtime victories thanks to Kevin Shattenkirk (against Dallas) and Jaden Schwartz (against LA).

If this wasn’t enough to raise a brow, the stats get worse when looking at the season as a whole. The Note have actually been on the wrong end of too many two, and three-goal games, where most playoff teams see their winning percentages improve, but the Note have seen theirs decrease. They are only 9-8 in two-goal games, and 7-9 in three-goal contests showing they don’t go up by much on teams very often. The Blues are also tied for 3rd overall in losses after leading for two-periods of a game (6, including OTL’s) and they are 24th overall in win-percent when leading for two-periods of a game (.786, 1. PIT 1.00). If the team isn’t able to find that drive after scoring a couple of goals, this year’s playoffs will be more of the same old story in St. Louis.

Though this lack of killer instinct issue has reared its ugly head, the team has actually been playing very well since the All-Star break ended. The team is 10-4-1 since the skill session played out at the end of January, and have raised their GPG average from 2.42, to 2.67 over that same span. Hopefully the Blues can build on their recent momentum which has seen them keep pace with Central Division powerhouses Chicago and Dallas so they can gain favorable playoff positioning to make it easier on themselves in the postseason.

Colton Parayko has been a force on the back end, which will hopefully help his team play better down the stretch (Amy Irvin / The Hockey Writers).

That way they can focus on finding their killer instinct in round-1, on the way to at least a two-round playoff run, something the fans have been waiting for since 2012. To do so the team needs to focus on their on-ice communication, and continuing to dictate the pace of play even after in-game momentum shifts. If the Blues can ride the wave and play a true 200-foot game after their opposition starts pushing back, they should find themselves a lot closer to a Stanley Cup than many realize this year and beyond.