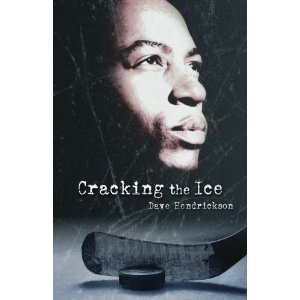 The sad reality has been, with as far as society has come, there were still some hockey fans who threw the rest of us right back to the days when black hockey players suffered verbal and physical abuse simply on the basis of the color of their skin.  There is no excuse for the behavior exhibited by some fans towards the Washington Capitals’ Joel Ward during the 2012 playoffs – especially coming from fans of Willie O’Ree’s former team.  That behavior made this an appropriate time for all of us to be mindful of some valuable lessons from Dave Hendrickson’s Cracking the Ice.

In Cracking the Ice, Hendrickson wove the tale of young Jessie Stackhouse, a very smart and talented teen hockey player coming of age during the Civil Rights Movement.  He chronicled the first year of Stackhouse’s prep school hockey career.  From the progressive headmaster’s attempts to seamlessly integrate the New England school and the friends for whom his skin color did not matter to the racist coaches, players, and classmates Stackhouse had to endure, the story was an amalgam of the best and worst behaviors many black athletes experienced during the mid-20th century.

Although the author interviewed former prep school players, Cracking the Ice was a fictional account of these experiences.  The author’s first young adult novel, he tackled the highly charged environment of prep sports and long-held racist beliefs in an honest way.  For many of his targeted audience, the details may be shocking – especially to young adults who are quite far-removed from the environment their grandparents witnessed during the 1960s.

There were a few things that seemed somewhat forced in the narrative – mainly the experiences of Jessie’s father.  It felt a bit contrived for the elder Mr. Stackhouse to have had so many iconic experiences during the Civil Rights Movement, specifically marching to Selma with Dr. King, Bull Connor’s water hoses in Birmingham, and the horrendous violence perpetrated against Freedom Riders in Mississippi.  Hendrickson also wrapped up the book with final scene reminiscent of a formulaic Hollywood ending: good triumphs over evil and good gets a bit of sweet revenge for his troubles.

However, the lessons and the overall story far outweigh these small literary inconveniences.  Hendrickson’s narrative was compelling and, although fictional, an honest account of our not-so-distant past.  With the 50th anniversary of the bombing of Birmingham’s Sixteenth Street Baptist Church approaching in 2013 (where the act itself killed four young girls, and later took the lives of two young boys in the violent aftermath), we all need to remember and acknowledge the past so we are not doomed to repeat it.