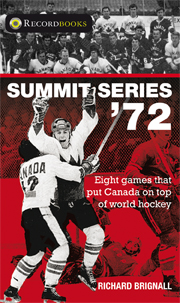 Like the title teases, eight games returned Canada to world hockey dominance in the 1970s.  The arrival of the Soviet Union to world hockey competition was a wakeup call to the Canadians.  Until the World Championships in 1954, Canadians took for granted that their country would always dominate hockey – it always had.  When the Soviets beat the East York Lyndhurst team that represented Canada that year, it was considered a “catastrophe for Canadian hockey.” (24)  Summit Series ’72 recounted the experience of this all-star team, from their original assumptions of the Soviet team (not so good) to every goal scored in Game 8.

Richard Brignall brought both the players and the fans perspective into Summit Series.  He carefully explained the situation in ways that all levels of readers will enjoy and be able to follow.  The NHL had taken over the minds and hearts of Canada’s hockey faithful and often the amateur and junior leagues were merely an afterthought for many fans.  What especially demonstrated this mindset was the descriptions of teams Canada sent to international tournaments:  the Penticon Vees, the Kitchener-Waterloo Dutchmen, the Trail Smoke Eaters.  The men who played for these teams were truck drivers and milkmen, not professional athletes.

Unlike today, for most of the history of international play, professional athletes were ineligible for competition.  Regardless of this, many teams outside of Canada and the United States fielded teams with the equivalent of professionals, but officially labeling them amateurs.  As these teams began to dominate world competition, the best available players in Canada were considered ineligible.  When Canada attempted to include professional hockey players, many Eurpoean teams – especially those in the Eastern Bloc – blocked them from competition.  It was not until the Soviets came to completely dominate the game in the 1960s that they later acquiesced and wanted to challenge the “best of the best” of Canadian professional hockey players.*

Not only was Summit Series a lesson in Canadian hockey history, it was a lesson in Cold War history.  Like many of the books in the RecordBooks series, Brignall and his editors used text boxes to call out interesting information as well as to explain less familiar concepts.  They discussed communism, the birth of the Soviet Union, and the Cold War in basic and understandable terminology.  This provided a context for a new generation that did not grow up under the shadow of the Iron Curtain, which underscored the importance of competition between the Soviets republics and the rest of the world.

Brignall tackled the story of the team that returned Canada to a world championship in 1972.  Despite not being old enough to remember the series (in the Acknowledgements, Brignall explained that he was not yet born when the games took place), he thoughtfully and thoroughly researched the event.  Relying heavily on reporters accounts and the existing historiography, he provided an easy to read and digest account for readers who’s grandparents are more likely to remember “where they were” when the Canadians won that final game in Moscow.

* After the Summit Series, international and Olympic hockey returned to fielding teams of amateur players.  It was not until 1998 that the Olympic Committee finally began allowing NHL players to participate in the games.