The first month of the Boston Bruins season is just about in the books, they have one more game tonight against the Anaheim Ducks, and it’s already been an eventful one. From John Scott’s hit to David Krejci’s last second goal to the meltdown against New Jersey, it’s been an October to remember.

While the Bruins haven’t been the perfect team this month (then again no one is), they have been pretty good. Now it’s time to name my three stars of this already exciting month of play in October.

Tuukka Rask would have probably been the first star had it not been for a shaky end of the month. Going into this season, there were a couple of question marks regarding Rask, like if he could live up to his huge contract and if he could withstand playing an entire season as the unquestioned number one goaltender in Boston. So far he has answered both of those questions during this first month of the season.

Rask is on a two game losing streak after dropping games to the Devils and Pittsburgh Penguins, but was absolutely dominant at the start of the season. He was great in the first two games of the season allowing one goal each to the Tampa Bay Lightning and the Detroit Red Wings and perhaps had his best game shutting down the San Jose Sharks in an exciting last second win.

Rask is the absolute life force of this team and as long as he has a good season, the Bruins will be successful as well. Just so long they don’t commit stupid penalties in the waning seconds of a game, i.e. the Devils game.

Patrice Bergeron has not missed a beat and is still playing as one of the best two-way forwards in the league. While Bergeron hasn’t been exactly lighting it up points wise, only six points this month, it’s his defensive play and leadership that made him so valuable this month.

Still recovering from injuries received during last season’s Stanley Cup Finals, Bergeron has been able to play through it despite not being 100%. He is starting to play his usual amount of minutes, so, look for him to have a better month in November scoring wise.

His line has certainly taken off since the implantation of Reilly Smith and Loui Eriksson coming over from Dallas. Bergeron, Eriksson, and Smith mesh really well together and once Eriksson comes back, they will be a force to be reckoned with.

Although he had a boneheaded delay of game penalty against the Devils that led to the Devils comeback, Bergeron has had a solid month. Bergeron is still one of the best players on the Bruins and in the entire NHL. 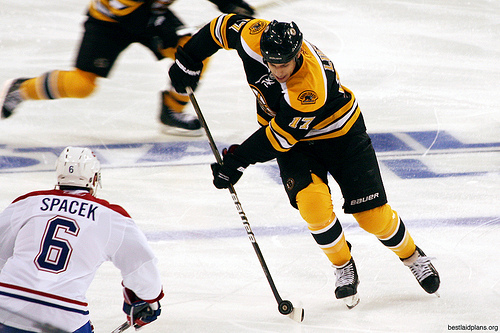 What hasn’t Milan Lucic done this month? His superb play this month has more than earned him the first star for the month of October.

Lucic’s terrific playoff run last year has definitely crossed over into this season. In 11 games this season, Lucic has recorded a point in nine of them and is tied with David Krejci in points scored with 12 and leads the team in goals with six. The team has been having trouble finding consistent scoring from it’s veterans, case in point Brad Marchand, but that hasn’t been the case with Lucic. Lucic has taken the reins and has become a leader on this team.

Lucic has been able to harness his intense style of play and turn it into being an offensive power for the Bruins. This has all the makings of a breakout season for Milan Lucic and come out as one of the best players in the NHL.

Lucic’s strong play this month as not gone unnoticed outside of the Bruins world. Lucic is making his case to make the Team Canada squad for the Sochi Winter Olympics.

Who do you think were the three stars for the Boston Bruins this month? Comment below or send me a Tweet, @MarkWGraham