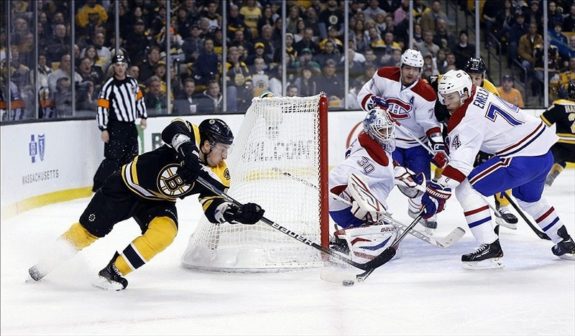 With the Winter Olympics over, the fast transition into the final portion of the regular NHL season is upon players, teams, and fans alike, with the Boston Bruins returning to the action against the Buffalo Sabres at the First Niagara Center in Buffalo, N.Y. Wednesday night.

Pre-Olympic break, the physicality and long stretch of games caught up with a few of the key assets of Boston’s lineup, including forward Brad Marchand, whose seemingly never ending slump is likely over. Having two and a half weeks to take some time to reset himself and get geared towards a playoff run for the B’s means lightning pobably won’t strike the same place – or season – twice, and the Bruins surely need him if they wish to stand a chance against their opponents in the postseason.

Brad Marchand has been an asset in the Bruins’ postseason for the past three years, and after last year’s loss to the Chicago Blackhawks, Marchand was the only player who returned to the ice for a fresh season like he had never left the defeat behind him.

At the beginning of the 2013-2014 season, Marchand went through a twelve-game goal drought, causing definite concern and frustration with those expecting much, much more from him. Fans begged him to “wake up,” and surely, management was crying the same plea at the pint-sized powerhouse, who typically produces 40-50 point seasons with the Bruins. The first half of his season was lackluster, and even when he finally broke his dozen-game slump, he found himself in another six-game dry spell a few contests later. Assists came far and wide between, holding almost equivalent rarity as goals did for the 5’9″ left winger, who was moved around from line to line in an attempt to inspire him.

The moment the Boston sports world realized Brad Marchand was, in fact, still Brad Marchand, was the December 14th contest at Vancouver, where he notoriously infuriated not only the Canucks, but all sports fans who don’t appreciate the “classless” style of game Marchand plays – as in, everyone who isn’t a Bruins fan.

And that right there? The largest sign of life from Marchand in a very, very long time.

A month after that, Marchand had a six-game point streak to carry him through a frigid mid-January. Something clicked with “the Rat” as he gained more confidence, and before the break, Marchand was playing some of the best hockey he’s displayed all season.

Marchand is hopefully coming off the break still hot from the last game the Bruins played as a team, where he notched one goal and two assists against the Ottawa Senators on February 8th, leading the Bruins to a 7-2 victory in enemy territory.

When asked whether or not he feared the return of another point drought, Marchand responded…

“I don’t think you can have two horrible stretches in the year, that doesn’t seem fair…I felt pretty good in practice, and felt pretty good before the break, so hopefully it will continue the same way.”

Hopefully his gut feeling is as good as ours, as the rough and rowdy winger gets ready for the final haul of the regular season. The playoffs are everyone’s focus at the moment, and the drive to get there is a weight that can’t be pulled by just a few of a team’s star players.

Meanwhile, Marchand has been skating on a line with Carl Soderberg and Reilly Smith at practices, hopefully finding his niche with some of the strongest talent on the Bruins’ roster. Marchand has earned a total of 37 points this season, and with 19 of those points registered as goals, he currently leads the team in goals scored. Following closely behind him in the goals race are rookie Reilly Smith (18) and veterans Jarome Iginla and Milan Lucic (17 each).

Amidst praising his fellow teammates returning from Sochi, Marchand seems as ready as ever to play some Bruins hockey.

Let's not forget great performances from Loui, Tuukka, Krecj and Zee. Claude and Peter for their job too. Let's get the season going again