Last year Ilya Bryzgalov found himself in a pretty odd situation. Bryzgalov’s career was on a sour path after being bought out by the Philadelphia Flyers at the end of the 2013 NHL season. He ended up signing with the Las Vegas Wranglers of the ECHL before being picked up by a struggling Edmonton Oilers team. Bryzgalov served his time there before the goaltending-cursed Minnesota Wild came calling for the 33 year-old veteran. The Wild needed some insurance as they headed to the playoffs with a few injured netminders. What happened next was eerily similar to what we’ve been seeing out of this year’s Minnesota goaltending pickup. While Devan Dubnyk has impressed us all with his 26 wins in 36 games in Minnesota in 2015, Bryzgalov finished the Wild’s season last year with an equally impressive 7-1-3 record to secure Minnesota’s playoff spot. He also gave us one of the best moments of the year when he was egging the Winnipeg fans on with their mocking chants.

The postseason didn’t quite bring us Bryzgalov’s best performance. After surrendering 5 goals to Colorado in a Game 1 loss, he was pulled in Game 2 after giving up 3 tallies on 14 shots. Darcy Kuemper took Bryzgalov’s place and won 3 out of the next 4 games to set up a game 7 in Colorado.

Which was when the wackiest of things happened. Darcy Kuemper left Game 7 with 8:13 left in regulation. Minnesota fans were probably a little concerned seeing the struggling Bryzgalov enter the pivotal game in the 3rd period down a goal. But Bryzgalov didn’t face a single shot in regulation and only had to turn aside 1 in overtime and Minnesota pulled the upset over the Avalanche. 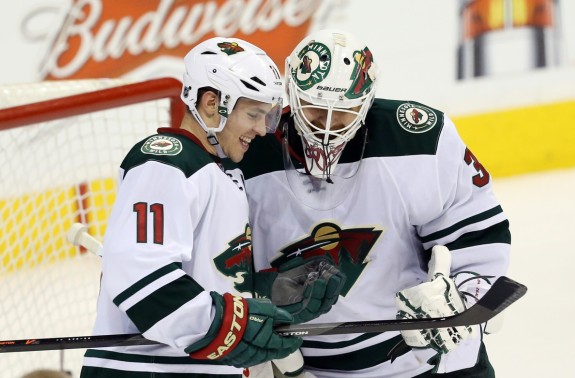 The second round against the Chicago Blackhawks gave us a couple of solid Bryzgalov performances but the Wild were a bit overmatched and ended up falling to the Hawks in 6 games.

What Ilya Bryzgalov’s Done Since

After failing to crack the Wild roster during training camp, Bryzgalov ultimately signed mid-season with the Anaheim Ducks. His first start didn’t go as planned, as he got shelled in a 6-2 loss to the Ottawa Senators on December 19th. Things continued to go south as Bryzgalov went 1-4-1 with an .847 SV% and a GAA north of 4. He was eventually placed on unconditional waivers and had his contract terminated and finally went home on February 27th. “It’s not the way I had hoped things would work out,” Bryzgalov said at the time. “But when you can return to a family you love, could life be any better?”

Now, one year removed from one of the craziest backup-goaltending situations in recent NHL history, how is Ilya Bryzgalov spending his time with the playoffs just around the bend?

Well whatever he’s doing we all hope that Ilya is enjoying himself and we hope to see him back in the NHL one day. Because the NHL was always more interesting with him in it.