In just a few short weeks, the 45th edition of the Buffalo Sabres will take to the ice.  Last season was a disaster, but that was last season.  With some nice young talent a year more experienced, stability on the bench, and a shiny new second overall draft pick that could crack the roster, I am left with some cautious optimism.

Teams in the NHL can have their fortunes changed for better or worse just with the draft alone.  So much preparation goes into making a selection, but even with all of the man hours spent seeing a particular prospect play or reading up on different scouting reports, the picks that are made could set a franchise back years.

If a team had the “knew then what we know now” ability things could be so different.  The Sabres have had a nice little run of drafts the last couple of years, but the start of the new millennium was kind of a different story.  After ending the 20th century with a Stanley Cup Final appearance sandwiched in between other playoff appearances, Buffalo has struggled to regain their form and missed out on the postseason three years in a row in the beginning of the 21st.  This was largely due in part to the misses at the NHL Draft, team going bankrupt, and the inability to keep star players from defecting to other cities.   We will just focus on the Sabres busts and beautys of the first round of the draft. 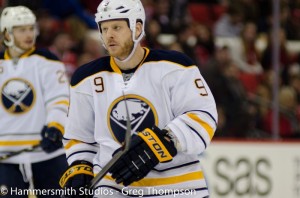 After losing in the first round of the Stanley Cup Playoff’s, the Sabres wound up picking 15th in the draft.  After the New York Islanders selected Rick DiPietro first overall, players like Dany Heatly, Marian Gaborik, and Scott Hartnell were all selected before Buffalo stepped up to the podium.  With needs to fill they selected Kryukov with their pick, missing out on players like Brooks Orpik (18th overall), Brad Boyes (24th overall), Steve Ott (25th overall), Justin Williams (28th overall) or Nicklas Kronwall (29th overall).

Kryukov is still an active player over in Russia, but never once skated for a team in North America.  The Sabres have the distinction of the only player drafted in the first round in 2000 to never play in the NHL.

Unlike Kryukov, Novotny did lace up the skates with the Sabres for 64 games scoring eight goals and eight assists.  While this is in no way considered a successful draft pick, the players selected after him prior to the Sabres picking in the second round weren’t as eye-popping as the previous draft, a player like Tim Gleason (23rd overall) could have helped the blue and gold on the blueline for several years.

Novotny was eventually traded away from Buffalo in 2007 to the Washington Capitals for Danius Zubrus.  He would stay in the NHL for a couple seasons before heading over to Russia to play in the KHL.

The Sabres had the luxury of having two first round picks in 2002.  Although both players are still playing in the NHL, neither are with Buffalo.  Ballard was selected ahead of Alexander Semin (13th overall) and Chris Higgins (14th overall), but should be more known for the trade that landed the Sabres Chris Drury in 2003.  Ballard was still attending the University of Minnesota at the time so his NHL ability was not known until the 2005-06 season with the Phoenix Coyotes.

Daniel Paille cracked the Sabres lineup in 2005-06 where he played 14 games.  He would spend time with Buffalo’s American Hockey League affiliate, the Rochester Americans, the following season while also lacing the skates with the Sabres for 29.  He would play two more seasons in Buffalo before being traded to the Boston Bruins in 2009.

Vanek is one of the Sabres that will go down as one of the greats.  Before being traded last season, he was in the top 10 in goals and points all-time.  It was a very talent heavy first round with players like Dion Phaneuf, Ryan Getzlaf, Zach Parise, Corey Perry, etc.  It is hard to say if the Sabres fortunes would have been any different having selected one of those other players.

Buffalo’s hands were forced when Vanek was signed to an offer sheet as a Restricted Free Agent by the Edmonton Oilers.  Having just lost Chris Drury and Daniel Briere to free agency, the Sabres had to save face and match the hefty offer.  It is hard not to imagine what it would have been like having the Oilers first round picks for four years, but that is all in the past now.

With the re-build in full motion, the Sabres traded away their Captain to the New York Islanders for Matt Moulson and picks last season.

Finally a Sabres first round pick that is still with the team.  Drew Stafford has played over 500 games with Buffalo and has amassed nearly 300 points.  There were a few other players after Stafford was selected that could have helped out such as Travis Zajac, Andrej Meszaros (on the Sabres now), and Mike Green, but just like in the Vanek draft it is hard to say if it would have mattered all that much.

Stafford is one of the longest tenured players on a young Sabres team and will be looked to step up this season if they want to climb out of the basement.  He is slotted on the third line and should be able to provide some pop.

For the second straight year the Sabres were in the 13th spot in the draft.  The Sidney Crosby draft.  There was a tiny thread of hope that they would have been able to sneak in that spot due to the lost season but that didn’t happen.  Instead they decided to go with the Slovakian Center Marek Zagrapan.  Similar to a few first round picks that came before him, Zagrapan never played a single game in the NHL.  He was close.  He played three seasons in the AHL but was never able to make the jump.  He was one of three first round picks to never make it to the higher level.

The next installment will take a look at the Buffalo Sabres first round hits and misses from 2006 to 2010.