It’s been a long, long summer for fans of the New Jersey Devils, one that has at times probably seemed like a roller coaster for most of it with many ups and downs involving re-signings, player movement, sudden retirement and a new ownership group. In 15 days the team will be hitting the ice for their first full team practice on September 12, after spending the earlier part of that week taking physicals and doing promotional stuff, taking headshots, etc. 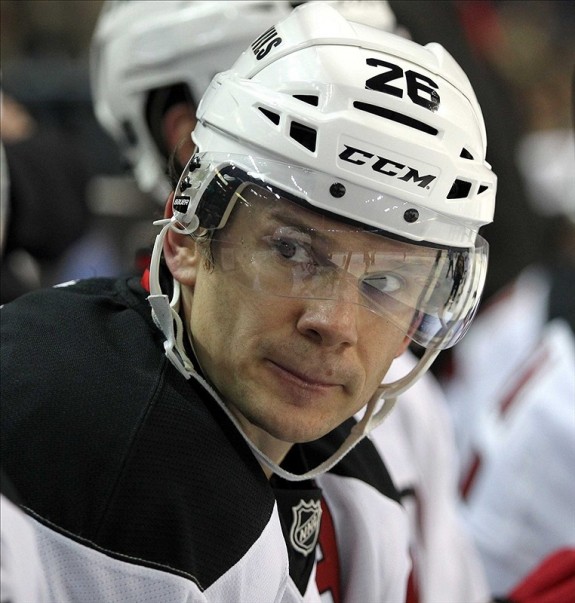 Patrik Elias and the Devils look ahead to a fresh start in 2013-14. (Timothy T. Ludwig-US PRESSWIRE)

There are many storylines surrounding New Jersey’s only professional sports team as another season begins with the quest for the franchise’s fourth championship. Here are just a few of the burning questions that have probably been racing through their fans’ minds since they last played a game way back on April 27 with Devils training camp now visible on the horizon.

HOW WILL THE DEVILS REPLACE ILYA KOVALCHUK’S SCORING?

Ilya Kovalchuk stunned the hockey world as well as the New Jersey Devils when he announced his sudden retirement from the NHL to go home to Russia to play in the KHL. The Devils had already added Ryane Clowe, Michael Ryder and Rostislav Olesz in free agency before Kovalchuk’s bombshell and weeks after they added a legend in 41-year-old Jaromir Jagr who is currently the eighth-leading scorer in NHL history (1,688 points). 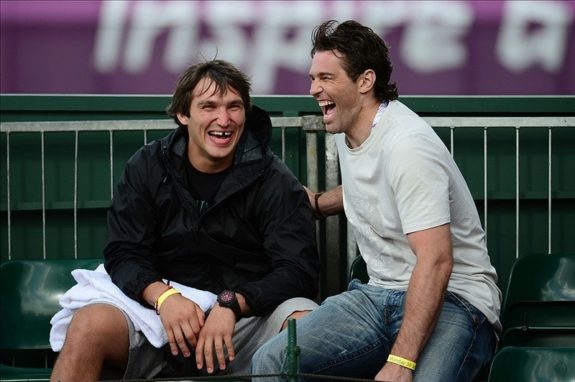 The Devils hope Jagr (right) is all smiles this season in New Jersey.(Kyle Terada-USA TODAY Sports)

Truth be told did Kovalchuk ever seem like a great fit in New Jersey, despite being a key part of their unbelievable run to the 2012 Stanley Cup Finals? From an outsider’s perspective, his style never meshed with the Devils’ team-first concept, whether he was staying on the ice too long during his shift or playing the entire two minutes on a power play. Aside from that run to the Finals the team missed the playoffs during the two seasons that he wasn’t acquired in; he was traded to the Devils on February 4, 2010 with the team already in a playoff position.

It will be interesting to see the lines that coach Peter DeBoer comes up with as he tries to blend the new faces with the old. The feeling is that the PP could be a lot better with proven scorers like Ryder and Jagr in the fold and it will be interesting to see if last season’s acquisition Andrei Loktionov emerges as a solid contributor after showing flashes of brilliance in 28 games after being traded from Los Angeles.

Watch as Loktionov ties the game in the third period at Buffalo:

Other burning issues among the forwards as training camp starts will include: can Adam Henrique regain the form that made him a finalist for the Calder Trophy in 2011-12 now that he enters the season injury-free and with brand-spanking new contract in hand and will Stefan Matteau or Reid Boucher make the team and/or have an impact if they do?

HOW MANY DEFENSEMEN WILL BE ON THE OPENING NIGHT ROSTER?

Last season the Devils went through the entire season carrying eight defensemen on their active roster and all of them were in the lineup at various points during the season. During the offseason only one of the eight has left New Jersey — Henrik Tallinder was traded back to the only other NHL team he has ever played for, the Buffalo Sabres. It’s very likely that they could carry eight defensemen again in the 2013-14 season, unless one of them is dealt away at some point.

Zidlicky will likely be on the first PP unit again this season. (Jim O’Connor-US PRESSWIRE)

The seven who will be on the roster are: Andy Greene, Adam Larsson, Marek Zidlicky, Bryce Salvador, Anton Volchenkov, Mark Fayne & Peter Harrold. Chances are that a rookie blueliner will either make the team out of camp or be called up at some point; the three most-likely blueliners vying for that spot will be Jon Merrill, Alexander Urbom & Eric Gelinas.

Read more on these three as they attempt to make the jump from Albany to New Jersey.

The defenseman who could get traded would seem to be Fayne, but GM Lou Lamoriello has shown in the past that he likes to have depth on the blueline in case someone suffers a major injury. His mind could be changed on this if one of the youngsters in his stable has a tremendous training camp.

HOW WILL THE GAMES BE SPLIT IN GOAL BETWEEN THE TWO GOALIES?

41-year-old Martin Brodeur enters his 21st NHL season, all with the Devils, and 27-year-old Cory Schneider will be in his first season in New Jersey with a mere 98 NHL games under his mask. New Jersey has the most back-to-backs in the league this season, so it’s quite possible that the two tenders will be splitting the games unless one of them is felled by an injury; definitely a possibility with Brodeur suffering injuries the last few seasons. 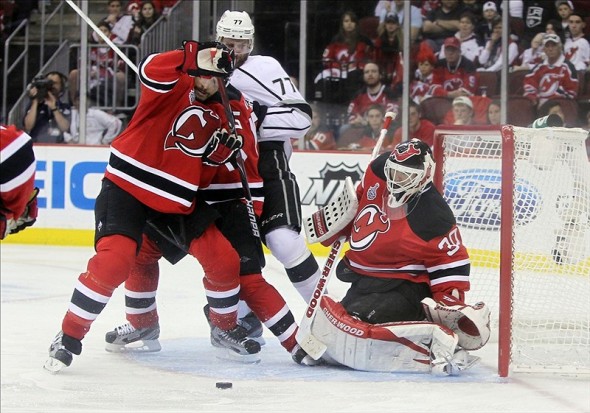 How many games will Brodeur play with Schneider now in New Jersey? (Ed Mulholland-US PRESSWIRE)

Bold prediction is that they split the games down the middle, 41 apiece, and there is nowhere near the drama that Schneider encountered during his final two seasons with the Vancouver Canucks sharing the crease with Roberto Luongo.

HOW WILL THE DEVILS DO IN THE NEW METROPOLITAN DIVISION?

With the new realignment in the NHL, the Devils will be competing in their division with their usual rivals (Rangers, Islanders, Flyers, Penguins) in addition to three other teams (Capitals, Blue Jackets, Hurricanes). The opportunity to make the playoffs will be an even tougher task, with only the top three teams in the division assured of a postseason berth and the team that finishes fourth may or may not qualify.

The Devils haven’t played Columbus often, but Dainius Zubrus knows how to score against them:

With a plethora of games within the division it will be very important to win those match-ups to keep a leg up on their closest competition. The low amount of travel should still be a plus for New Jersey as a decent-sized amount of divisional road games will still be bus trips rather than plane trips. If they don’t suffer any major injuries and play to their potential they should be able to finish either third or fourth in the first season of the newly constructed Metropolitan Division.

The NHL regular season schedule was released on Friday. Check out our partners at TiqIQ for the best deals on New Jersey Devils tickets for all 2013-14 games.