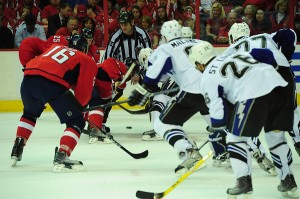 A lack of adjustments in the Washington Capitals’ play in Game 2 made for a tough 3-2 overtime loss to the Tampa Bay Lightning in front of their home fans.

The Capitals seemed a little more alert at the start of the game, allowing for much more fluid play between the two teams in the first period. For the second time this series already though, the Caps let in a goal in the waning minutes of a period, this time, from Lightning captain Vincent Lecavalier.

Once the goal was scored and the teams went to the second frame, the constant flow of play had stopped and the choppy play resulting from Tampa’s 1-3-1 style of play took over. Washington’s Brooks Laich was able to net one in to tie with almost five minutes left in the period, but only after six power play chances passed the Caps by without a conversion.

Cap-killer Martin St. Louis gave the Lightning the lead again about seven minutes into the third period and Tampa Bay seemed to be rolling along. It wasn’t until the Capitals pulled Michal Neuvirth when the Caps’ captain Alex Ovechkin responded and sent the game to overtime.

However, much like what hurt the Capitals the last game, a poor line change resulted in the Lightning heading down to the Caps’ zone on a 2-on-1, and Lecavalier struck again on an easy lifted forehand to put the puck over a fallen Neuvirth. It turned out to be a pretty game-winning goal for Tampa, but a rather ugly result that puts Washington with its backs against the wall.

The Caps seemed to be aware of their blunder. Jeff Schultz, who was secretly having a defensively solid postseason, said, “We just weren’t aware of that guy and they had a 2-on-1.” Schultz continued, “I tried to jump on as quick as possible, but I wasn’t fast enough.”

After the Tampa Bay Lightning stole Game 1 with a 4-2 win at the Verizon Center, one would assume that the Capitals would wake up from their slumber after having those five days of rest before the first match with the Lightning. But while the Caps looked okay to start, the second they went down a goal, they regained that defeated look and couldn’t seem to pick themselves up. 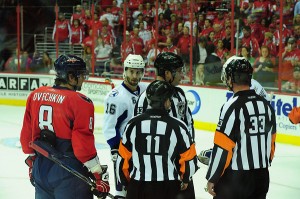 One major flaw for the Capitals was the already-mentioned, less-than-dead power play. Washington is now 0-for-11 in this series with the extra man. Tonight, the Caps received six power plays in the first two periods and with the perception that the Caps’ power play was improving, the results, including the number of shots and chances, were disappointing.

“We’re trying,” Bruce Boudreau said about fixing the dismal power play, “We’re trying different things trying to make things work. It’s not like they’re bad penalty killers — they stopped 35 out of 36 in Pittsburgh — so we just have to keep going at it.”

On the contrary, the Capitals were also guilty of committing silly penalties. Albeit, there are claims of the officiating being “ticky-tacky” so far, but Washington’s attempts to get physical often resulted in getting sent to the box, such as Mike Green’s two roughing penalties. Facing the top-ranked power play of teams still in the playoffs, minimizing those opportunities that Tampa has to score would greatly work in the Caps’ favor. After all, the Lightning have now already scored twice this series against the Capitals’ efficient penalty killing squad.

A big factor in why all of the aforementioned issues occurred for the Capitals resulted in the failure to put on quality shots on net. The keys to win include getting to Dwayne Roloson early and often and to set the tone of the game. Even though the Caps outshot the Lightning 27-9 through the first two periods, and 11-6 in the first period, Washington only had four quality chances in that first period. The lack of sustained pressure on Roloson took away many other opportunities that could have come the Capitals’ way. Roloson, once again, gave up a number of juicy rebounds, but it seemed, even more than in Game 1, the Lightning players got to those pucks faster than any Caps player in the offensive zone. The Lightning were then able to stop the Caps from getting anything on net and held Washington to a mere five shots in the third period.

The lack of pressure and quality opportunities on offense also resulted from the Caps just doing too much on offense, which was an issue long ago in the earlier part of the regular season. Boudreau, of course, did not want to say players like Ovechkin were wasting energy. However, he admitted Ovechkin “is not getting much done.”

Overall though, the Lightning looked hungrier, and more determined to win the game. They were ready for the Capitals to want to prove that Game 1 was a fluke, and Tampa proved otherwise.

Of course, though, I advise Caps fans to hold off on the panic. The Capitals are surely capable of turning this around and potentially 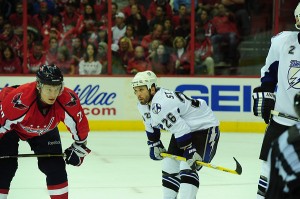 winning the series. Not only has Neuvirth been the one Capital who has performed to his potential, but Washington has history on their side — history as recent as last week. The Boston Bruins did lose the first two games at home to the Montreal Canadiens, only to take the next two and battle the rest of the way to move on to Round 2. For a more direct line, the Capitals were in this same situation in 2009 against the New York Rangers and won that series in seven games.

““Well, the series is not over,” says Ovechkin. “We’re going there and we’re going to win two games. It’s going to be hard. But we have to win.”

Nonetheless, Tampa will come ready for Washington. They’ve now won five in a row and with Martin St. Louis and Lecavalier getting hot in the series, it’s only a matter of time before Steve Stamkos gets going and the Lightning can jump even more on the Capitals’ mistakes.

“We’ve been in this situation before when a team comes back,” said St. Louis, “but you just have to go out and play. We regrouped after the overtime and we came out hungry and composed.”