Former rivals Chris Chelios and Chris Pronger were a part of the NHL’s jam-packed New Year’s weekend, featuring the Winter Classic and Centennial Classic. Though fierce battles were a regular between the physical defenders, the hatchet was buried long ago.

After Chelios skated with the Red Wings at the Centennial Classic Alumni Game, he headed to St. Louis for “The Coors Light Beer Summit” at Paddy O’s bar, nestled in a parking lot behind Busch Stadium. He was joined by Pronger, who skated in the Winter Classic Alumni Game, his first on-ice NHL event since retiring.

Though the rainy morning had many worrying whether the Winter Classic would start on time, Paddy O’s was filled with revelers, beer in hand, ready to hear stories from the Hall of Famers and celebrate the city’s rich hockey history. But before the Beer Summit began, Pronger and Chelios sat down with The Hockey Writers to talk about outdoor classics, alumni games and how the game has changed for blue liners.

http://gty.im/630733986The Hockey Writers: How was your experience with the alumni games this year?

Chris Pronger: That’s my first alumni game, but I got a chance to play in a real game in Boston. It’s a great experience. You get to get back in the locker room with all the guys you played with and some of the guys you didn’t, that played before you. It’s a great chance to kind of get to know them a little bit better and guys on the other team that you’ve always kind of battle with.

It’s a little more relaxed game, you can kind of have some fun with it. To hear 45,000 people going crazy was pretty exciting, though.

Chris Chelios: It’s an event, just like the All-Star game. So, the game is kind of second hand to everything else. It’s just good to see everyone, like Prongs mentioned. Some guys we hadn’t seen for at least 25 years, at least for me. Families, all the events going on around the fields, the league does such a great job with every game.

THW: Was there anyone you were particularly excited to see in the locker room?

CC: No. I’ve seen a bunch of the guys I’ve played with. I’ve played a bunch of alumni events over the years. Like I said, from the other teams, that’s pretty cool to see. Especially last year, the Minnesota team. In the 80s I was in Minnesota, so I got to see guys I haven’t seen for a long time. They really appreciate the effort when you have a sold-out crowd for a bunch of old guys. It’s pretty neat. 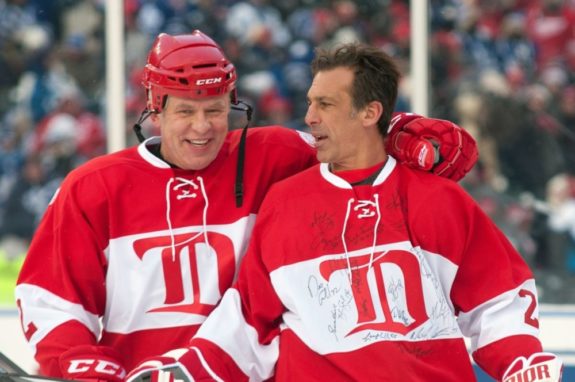 THW: From the player side, what stands out to you about the alumni game as an event?

CC: For me, it was just seeing the older guys. The Red Berensons, the [Bernie] Federkos, those guys come down to the ice and it feels good. I’m not there yet, but it feels good to see them.

Even the other outdoor games I’ve played, to see the older guys, the guys from the 60s, the 50s, it feels good to see them or their families representing them at the game. For me, that was the biggest highlight, watching guys I grew up watching.

CP: Like he said, the guys of that era, the 60s and 70s, that haven’t had a chance to be a part of one of these events, to see how excited they are in the lead-up.

For instance, Bruce Affleck has to get his hip replaced next week, but he’s waiting and waiting just to be able to play in the game, to have his family see him on the ice. For guys like that, you’re very happy and excited for them and for their families, to be able to have one last kick at the can and to have that opportunity to be in the locker room with the guys. It’s pretty exciting to be able to see those guys together again.

THW: For defensemen, what’s the most notable change since you played?

CC: It’s harder to get points, the way teams are structured so well defensively. I’m glad we played in the era we did. It was a lot easier to get points and get involved.

You look at [Kris] Letang, [Brent] Burns and probably [Erik] Karlsson, outside of those three you’re not getting a lot of points. Doughty runs the power play in L.A. and he gets 50-60 points. There’s not a ton of guys who get a lot of points from the back end. A few will get 40 or 50, but outside of that, it’s pretty hard. 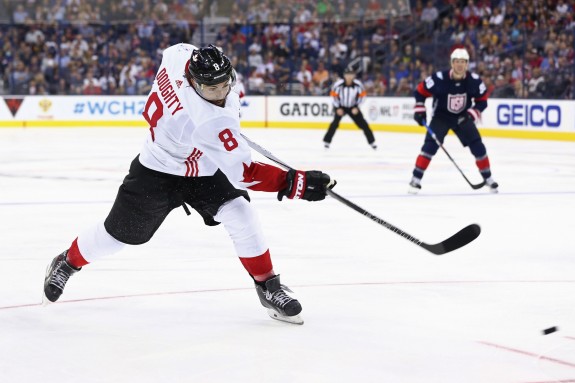 THW: If you look around the league, who is the one defenseman you’d want to be on a pairing with?

CP: For me, probably Drew Doughty. He’s a right shot. He gets up the ice and plays a little more [defense]. We could work off each other in tandem. I’d probably pick him.

CC: If we’re going rightie/leftie, I’ll take Duncan Keith all day long. There’s also Letang, Doughty for good righties. But for sure Duncan Keith is great to watch. He’s good in every aspect of the game.