The St. Louis Blues were generous enough to give their RFA right-winger a hefty wedding present.

The Blues announced on Friday that they agreed to terms with 2013 leading-scorer Chris Stewart, reportedly worth two years and $8.3 million. The contract is expected to pay Stewart $4.1 million next season and $4.2 million in 2014-15, making the cap-hit equal $4.15 million.

At the end of his new contract, Stewart will be eligible for unrestricted free-agency.

The announcement comes on the toes of Stewart’s wedding, which takes place Saturday. He was happy to announce the news to his followers on Twitter.

On the eve of my wedding in proud to announce that I will be spending the next 2 yrs in STL…. #bluesssssss

The deal also comes just a few days before Stewart’s arbitration hearing, which was scheduled for Monday morning.

Stewart was key to the Blues’ offense last season, leading the team in both goals (18) and points (36). He posted just one assist in the playoffs, which turned out to be on Barret Jackman’s game-winning goal in Game 2 of the Western Conference Quarterfinal against the Kings. Stewart was one of several Blues forwards who went scoreless in the playoffs; this list also included Andy McDonald and David Perron.

Stewart, a native of Toronto, Ontario, signed a one-year deal last summer after a dismal 2011-12 season. He scored just 15 goals and 30 points in 79 games played before being a healthy scratch for two of the Blues’ nine playoff games.

“We need more from him,” said Blues Head Coach Ken Hitchcock after Game 1 of the 2012 Quarterfinal against the San Jose Sharks. “It’s certainly not just based on one hockey game. We just need more.”

They received more. Stewart flew out of the gate in 2013 when he scored twice on opening night in a 6-0 victory over the rival Detroit Red Wings. He added two more goals in the month of January to help get the Blues off to a flying 6-1-0 start. 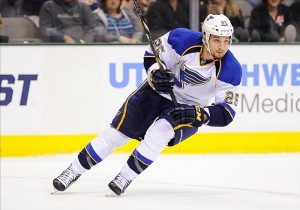 Stewart’s cap-hit is also notable. His contract keeps the Blues $8.82 million under the $64.3 million salary cap. The Blues still have #1 defenseman Alex Pietrangelo and rookie standout goalie Jake Allen to re-sign for next season. Pietrangelo is expected to receive $5-7 million on his new deal while Allen could sign for a lower amount, believed to be in the $1.5-3 million range. The Blues will likely be spending to the cap limit but did not break the bank with the Stewart signing.

In this deal, the Blues will be relying on Stewart to be a team leader in offense. With his big frame and smooth skating ability, Stewart has been known to pull off some tricky moves that lead directly to big goals.

The Gateway City will be hoping that Stewart will reciprocate his wedding present for the next two seasons.