For as long as any Blues fan can remember, the Detroit Red Wings have been a thorn in the side for their favorite team.  From Steve Yzerman’s overtime killer in Game 7 of the 1996 Western Quarterfinals to being swept in the 2002-03 season series (0-4-1), the Blues have long been on the wrong side of a Red Wing celebration.

Things may finally be changing.

In the first game of the 2012-13 season, the St. Louis Blues trounced the Red Wings at Scottrade Center, 6-0.  The score may not even speak to how much the Blues controlled the game; Wings goaltenders Jimmy Howard and newcomer Jonas Gustavsson face 36 Blues shots.  St. Louis goaltender Jaroslav Halak, being credited with a shutout, faced just 14 Red Wings shots.  The Blues took it to the Red Wings special teams squads, going 4-5 with the man advantage while killing all four Red Wing power-plays and adding a shorthanded goal from T.J. Oshie.

Four of the Blues’ six goals came with forwards sneaking behind the Wings’ defense, including Oshie’s sixth shorthanded goal of his young career.  He received a stretch pass from defenseman Alex Pietrangelo, who faked a clearing attempt and fed it right on the tape of the streaking forward.  Oshie had a clear breakaway and fired a wrist shot through Howard’s legs at 16:09 of the second period.

The Red Wings coveted their Russian Five in the 1990s, but likely do not have the same feelings as the lone Russian on the Blues’ roster.  Vladimir Tarasenko, 2010 first round pick and long-awaited Blues property, showed that he belongs in the NHL Saturday night.  Just 6:36 into the game, Tarasenko accepted a breakaway pass from youngster Ian Cole and found himself alone with Howard.  A leg kick and slick move later, Tarasenko sailed the puck upstairs to beat Howard stick-side.  But scoring his first NHL goal was not enough for the 21-year old.

Just .29 ticks into the second period, Tarasenko sidestepped Wings defenseman Kyle Quincey, getting himself alone with the Wings goaltender once again.  He made yet another move and placed the puck in almost the exact same spot as he did on his first goal, marking the second time in a ten months that a Blues rookie has scored on his first two shots (the other being Jaden Schwartz on March 17 and 21). 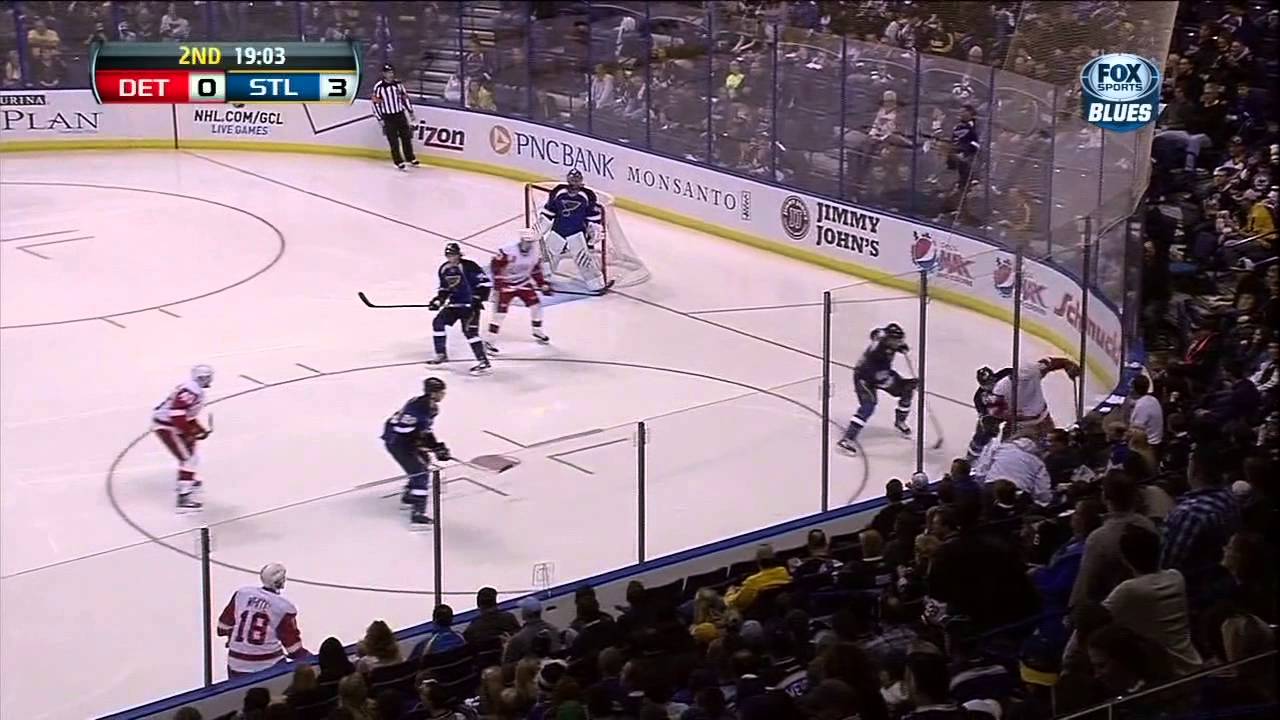 “He’s extremely impressive,” said Pietrangelo of his new teammate. “The way he handles the puck, his shot. He took it to a different level tonight.”

Chris Stewart added two goals and Patrik Berglund capped it off with a late power-play goal.  Halak also became the first goalie in Blues history to record a shutout on the opening night of a season.

The top two lines for the Red Wings still have the potential to give goalies nightmares.  Even those players looked average in this game, as NHL superstars Henrik Zetterberg and Pavel Datsyuk could not even combine for one shot.  The other go-to-guy on the Wings’ offense, Johan Franzen, only registered one shot on goal.

Even feisty defenseman Niklas Kronwall could not register a hit in 18:05 played.

The tone was set early by St. Louis, as Blues Captain David Backes registered two booming hits in the first .41 seconds of the game.  He finished the night with seven hits, far-and-away leading both teams.

The signs of the tables turning have shown up over the past few seasons.  Backes showed the Red Wings’ weaknesses on April 3, 2009 when he scored four goals on Ty Conklin and the Detroit team en route to a 5-4 victory in Detroit.  That win gave the Blues an extra push to return to the playoffs for the first time since the 2004-05 lockout.

The Blues also put up a 10-spot on the NHL dynasty back on March 30, 2011, when the Blues were already eliminated from the 2011 playoffs and the Red Wings were trying to maintain a division lead over the Predators.  The Red Wings did have backup Joey MacDonald and rookie Tom McCollum in goal, but Roman Polak, Chris Porter and Cam Janssen were three of the guys to find the back of the net in the Blues’ 10-3 drubbing.

Let’s not forget last season, when the Blues finished seven points ahead of the Red Wings in the standings, capturing their first Central Division Title since the 1999-2000 season.

While Saturday night may be just one game, it also may be the start of something special for the St. Louis Blues.