No one would blame Claude Noel for feeling like he was the fall guy when he was unceremoniously dumped after the Winnipeg Jets hit rock bottom in a home loss to the Columbus Blue Jackets, ironically the team he was interim head coach of for 24 games back in the 2010 season. However, the Winnipeg Free Press’s Gary Lawless was able to secure an interview with one of the most quotable men in hockey but only after the Jets season was over. The interview was insightful, refreshing and illustrates that a good man lost his job. The question is did the right men (as Perry Pern was also fired) lose their jobs? 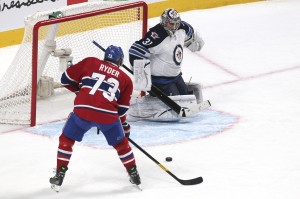 Mr. Noel proved that he is not only a class act but a man who is not afraid to look in the mirror. He also showed he is human as he needed time to digest what took place despite the fact he had a sense that he was going to be fired. He obviously cared about the team, its fans and the City and his firing hasn’t changed his mind.

Mr. Noel stated that it took about three weeks for him to go through the grieving process, which is not a shock given that he was nothing if not a tactician while head coach as he often agonized over player personnel moves and was never quick to judge or make a rash decision, which worked to his detriment many times over his tenure but is also one of the main reasons he could be a successful coach for another NHL team. 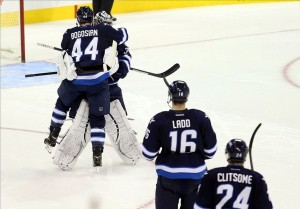 The Jets celebrate a win

Mr. Noel refused to play the blame game during his interview and did not throw anyone under the bus despite the fact he was not the sole reason for the team failing to live up to his expectations as he felt the team as currently constituted could make the playoffs.

It may not be a surprise that he didn’t go out with ‘guns blazing’ as he did state he hopes to one day coach again. However, it must have been tempting for him to fire back at his detractors who consistently maintained that he was holding the Jets back from taking the next step. They would cite his lack of experience as head coach in the NHL and exclaim that he was an AHL coach at best as if coaching in the AHL is an insult. He did not do that as he had nothing but praise for the fans stating that the people of Winnipeg were amongst other things fabulous, respectful and shared his pain.

Paul Maurice has eluded to the fact that it could take up to three coaches to turn a team around and become viable playoff contenders. Therefore, the argument can be made that Claude Noel was the right guy for the job but he was in the wrong place at the wrong time. Even though, he was given what appeared to be the enviable task of being the head coach of the Jets as they returned to Winnipeg with little expectations as the City had spent the previous 15 years yearning for NHL.

Reality quickly sunk in when the fans realized the Winnipeg Jets were a loveable (some more than other) bunch of under achievers with many bad habits and a penchant for teasing the fans with flashes of brilliance followed by the inevitable big let down. The man who ultimately paid the price for this was Claude Noel and the Noel detractors rejoiced. However, one cannot help but wonder if things would have been different and if Noel was in Paul Maurice`s shoes. He got a four year deal after 34 games coaching a team that Claude Noel basically broke in for him.

The Future of the Three Piece Suite

During his interview Claude Noel discussed his future. His immediate plans will be as guest commentator on TSN breaking down the playoff action but he made it clear that the `C` in Claude stands for coach as he would like to coach again. He didn’t rule out anything option be it as an assistant coach in the NHL, head coach in the AHL or trying out the waters in Europe or the KHL. Although, you get the distinct impression that he wants another shot at being a head coach in the NHL.

Mr. Noel stated that he felt blessed to be one of 30 men to be a head coach in the rarefied air that is the NHL and the icing on the cake was he got to coach a Canadian team where the fans are passionate and live and breath the game much like he does. It would be interesting to see Noel get a second chance at being a head coach and one can only hope he does as he earned a second look. He not only respects the position but he respects the game. Unfortunately, he was the right guy who just happened to get his dream job at the wrong time.