To say the 2016-17 NHL season has not begun the way the Colorado Avalanche would have liked is an understatement to say the least. It’s been a terribly inconsistent beginning to the new era under Head Coach Jared Bednar. That said, there are plenty of things to like about this new Avalanche team, and you can slowly but surely see the plan coming together on the ice.

The team’s level of play has fluctuated up and down way too often however. Whether it be the offense, defense, or goaltending, it’s been a mixed bag of performances to kick things off for the former NHL powerhouse.

The mixed bag roller-coaster ride began in Colorado’s third game. After getting off to a solid 2 and 0 start against the Dallas Stars and Pittsburgh Penguins respectively, the Avalanche got completely blown out by the Washington Capitals.

Here you can take a look at the pattern of inconsistency through their first 18 games:

As you can see above, it was a very tough schedule to begin the season, Peter McNabb went so far as to say this was Colorado’s toughest beginning to a schedule in team history, and it’d be hard to argue against that. 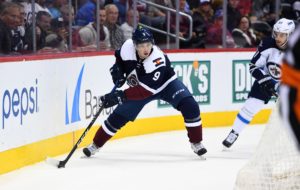 Different issues at different times have hurt the Avs. Semyon Varlamov went into a slump, plus lazy penalties, some poor defensive zone coverage, and a spell of very little scoring(especially during first periods), all cost Colorado crucial points in the standings.

Perhaps their up and down start is a sign of the players getting used to the new systems implemented by Bednar, along with all the new faces on the team itself. A positive to take out of this however, is that finally the offense, defense, plus goaltending, have all been clicking consistently over the last several games.

Any reasons for optimism? Yes I say, absolutely. Perhaps most importantly, compared to years past, shots for have increased while shots against have gone down – for the most part. The Avs have turned to advanced statistics under Bednar more so than ever before, and the improvements are slowly but surely showing on the ice.

Matt Duchene returned against the Columbus Blue Jackets last night, scoring the overtime game winner, while Gabe Landeksog should also be close to returning, that’s two huge offensive additions back into a lineup which was struggling to find the net. 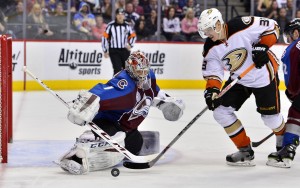 Calvin Pickad and Varlamov are now both playing great in net, Varlamov’s little slump is over while Pickard continues to show he is one of the very best upcoming goalies in the NHL. ‘Picks’ has posted four wins and one loss in his five games played, with a 2.07 GAA along with a .931 save percentage.

Adding to the stellar goaltending, Nathan MacKinnon, after suffering a bit of a scoring drought has broken loose and looks like a man possessed out on the ice lately. He notched a career-high 10 shots on goal the other night, and has put up five points(2G, 3A) in his last three games played.

Though, he’s not the only forward who is on fire right now.

Rookie Mikko Rantanen continues to show more and more each game, adding yet another young offensive threat to Colorado’s core of forwards. Rantanen has recorded five points in his last six games, really adding another dimension to the Burgundy and Blue.

Here’s a little clip of what MacKinnon has been up to:

And here is Rantanen sniping his first NHL goal, this kid is going to be something else. It reminded me of Joe Sakic picking his spot against Martin Broduer and the New Jersey Devils during the 2001 Stanley Cup Final:

To Playoff or Not to Playoff?

I’ve said it from the offseason and I’m sticking to it, this team should make the playoffs. One of the wild card spots is a very realistic goal for the Avalanche. If they can go on a run now that they’ve put their game together in all three zones, and seem to be adjusting better every game to Bednar’s systems, Colorado could surprise many and challenge for that third seed in the Central Division.

The club has proven they can beat anyone in their division and so the excuse of the Central being too tough can no longer be used. They’ve beat Dallas, Winnipeg, and Minnesota twice so far, the confidence should be there.

The consistency of their play has been the issue, but not as of late. Let’s hope that is a sign of the Avs trending upwards, and I believe it certainly is.