Zach Werenski of the Columbus Blue Jackets is one of the hottest rookie defensemen in the NHL right now. Game after game, he’s getting points and a whole lot of ice time. Whether it’s a win or loss, his point production remains the same. Werenski’s beginning to create an identity for himself; an idea people get when they think about him and this idea is turning him into the most consistent man alive.

The many emotions of Zach Werenski. #CBJ pic.twitter.com/1Ch0f5cnxU

Currently, Werenski’s point per game played (P/GP) rate is 0.88 and that’s a whole lot higher than Erik Karlsson’s P/GP (0.78). Over the last couple of years, Karlsson’s been gaining media attention because he’s led all NHL defensemen in points since the 2013-14 season. The Swedish defenseman is a two-time winner of the Norris Trophy as the NHL’s best defenseman, winning them in 2012 and 2015. He’s been mentioned in the same sentence as Bobby Orr and he’s even made Sportsnet Magazine’s cover for the March 2016 issue, ‘How-To Be The Best Defenceman on Earth.’

Werenski could very well be the next Karlsson or maybe even better. The question everyone’s asking about the 19-year-old defensive star from the University of Michigan is, how long will his offensive prowess last?

To put it bluntly, Karlsson can say goodbye to his three-year reign for most points by a defensemen. We cannot only expect Werenski’s elite point-producing abilities to last, but also increase.

In a recent article, I discussed the impact Mitch Marner has on the Toronto Maple Leafs and how much they rely on him to win games. Although Werenski isn’t as heavily relied on to win games as Marner is, there’s still a great deal of responsibility placed on his very broad shoulders.

When it comes to Marner, the Leafs have not yet won a game in which he hasn’t scored. Statistically speaking, when Marner scores, the game’s already won. In fact, the differences in Marner’s gameplay are astronomical when comparing metrics between games won and lost. With Werenski, his stats present themselves in a similar manner… except he can still score in games lost.

Like Marner, Werenski maintains the same amount of shots on goal in both games won and games lost (shoots on goal every 8:43).

In games lost, he:

When looking at Werenski’s stats, we can see two things: consistency and growth. For the most part, his shots on goal run parallel to his time on ice (TOI). Meaning the more ice time he gets, the more shots on goal he takes. This is especially true in October. However, on Nov. 5 when the Blue Jackets played against the St. Louis Blues, Werenski saw the most ice time to date but wasn’t able to take any shots on goal. In fact, the only other time he had zero shots on goal was on Nov. 1 when playing against the Dallas Stars.

Werenski plays a 200-foot game, has a nose for the net and rarely incurs penalties. He also takes 2.6 shots on goal each game, so when he’s not getting shots, there’s a problem. Although the Blue Jackets were victorious over the Stars, an area of weakness for Werenski may be hidden in games where he lacks shots on goal.

Werenski’s a rookie who’s never played less than 18:24 in a game.  His average TOI is 22:29 per game and this is one of his biggest differences as a rookie. He has the highest average ice time per game played of all the rookies who have debuted in the NHL this season. Clearly, higher than average rookie TOI isn’t a weakness for Werenski.

After using a new method to analyze data, a method similar to the one LinkedIn used to use when measuring content reach with the free account, it turns out that there may be a pattern found in minutes played each period. 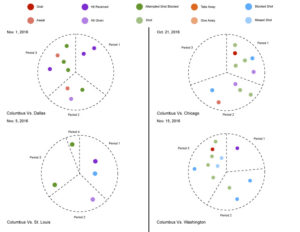 In the graphs above, we have Werenski’s on-ice events charted from four different games. Each section of the pies represent one period and the size of each “slice” reflects the TOI Werenski played that period. The dots inside each pie represent an event by Werenski and their color indicates the event type.

Generally speaking, most defensemen don’t score a lot of goals. In fact, defensemen tend to score fewer goals than forwards. In the case of Werenski, though, he scores more goals and registers more assists than most forwards in their prime, so I’ll be using the same metrics to track the progress of forwards in Werenski’s analysis, as well as additional metrics for tracking defensemen.

In the month of October, Werenski registered an assist every 38:18, and continues to register an assist every 38:12 in November. His average time on ice has increased slightly to 22:55 per game in November, from 21:53 per game in October. This may be a good thing, though, because based on the stats of other rookies, the majority are most effective when playing less than 18:00 per game.

Of course, John Tortorella is coaching the Blue Jackets towards a new style of play, one different from what we’re used to seeing. He’s doing a lot of work with his team and it’s certainly showing. He has a strong grip on puck management, focusing on the strategic use of ice and play away from the puck. As you can see, Werenski is indeed consistent and continues to improve his game where it matters most.

Although I only compared four games where Werenski had the most and least shots on goal, he may be more effective when he can use the first period as a buffer period, playing less than seven minutes and with shifts under a minute in length. As Werenski continues to play more games, we’ll be able to uncover more patterns in his gameplay and unveil the mysteries behind his effectiveness as a rookie in the NHL.