During the 2013 season, defenseman Danny DeKeyser finished his collegiate career with the Western Michigan Broncos and immediately started fielding offers from all 30 teams. While DeKeyser grew up in Macomb, Michigan and his favorite player was Detroit Red Wings legend Nicklas Lidstrom, he had the opportunity to play for any team he wanted to. One phone call from Lidstrom, and DeKeyser quickly signed on the dotted line. Fast forward to today, and DeKeyser has quietly become a dominant shutdown defenseman. Coach Mike Babcock has praised DeKeyser, suggesting that he and partner Kyle Quincey have been Detroit’s best defensive pairing. In fact, DeKeyser has quietly taken the principles of coach Mike Babcock’s shot suppression system and become one of the best defensemen in the NHL at suppressing scoring chances.

Of the 81 defensemen who have played at least 800 minutes at 5v5 this season, no one is better at preventing scoring chances. DeKeyser leads the NHL, allowing just 19.6 scoring chances against per 60 minutes. The next closest defenseman is Brian Campbell of Florida at 20.7. The next closest Red Wing is Jonathan Ericsson at 22.8. DeKeyser’s numbers aren’t just great this season, he’s posting one of the best seasons of the last decade when it comes to suppressing scoring chances.

I expanded the search to all defensemen who have played at least 800 minutes in a season from the 2007-2008 season to present. That search yielded 1035 defensemen. DeKeyser’s rate of 19.6 scoring chances against per 60 minutes is the 11th best mark. Of the 10 defensemen ahead of him, all but one started a higher percentage of their shifts in the offensive zone, thereby predisposing them to have fewer scoring chances against. Only two of the defensemen played with teammates that had lower average Corsi For%.

The caveats to this stat obviously are that Detroit has always played a strong shot suppression system so some of the numbers have to be related to the system that Detroit plays. In addition, DeKeyser has played against the 2nd-lowest level of competition of the top-11 defensemen when considering the Corsi for% of his opponents. However, we have to remember that coming in to this season, DeKeyser was 24 years old with 76 games of experience. His game is still rapidly improving, so we have to be impressed with where he is now and where he’s going.

The big knock on DeKeyser coming out of Western Michigan was that his offensive game was limited. At Western Michigan, DeKeyser never scored more than five goals and 17 points in a single season. The 2012-2013 season saw DeKeyser record just one assist in his first 11 games. However, DeKeyser quickly improved, bumping his numbers up to four goals and 23 points in 65 games last season. This season, DeKeyser already has two goals and 20 points in 51 games and ranks second on Detroit in defenseman scoring.

It’s been more than scoring with DeKeyser this season – we’ve seen the process improve. This season, DeKeyser’s 5v5 Corsi For% has jumped from 48.8% last season to 54.6% this season. The 54.6% ranks 10th among all defensemen who have played at least 800 minutes at 5v5 this season. Check out the company he’s with in the table below.

From this table we can see that DeKeyser is right in the middle of the pack when compared to these fantastic defensemen. It’s not like DeKeyser is benefiting significantly from having sheltered zone starts, or playing with the highest quality teammates or even playing against a very low level of competition. He belongs in the conversation. I have to state that we are looking at a small sample size of half a season, but this is very promising for DeKeyser’s development. In fact, check out how quickly he’s improved this season from the graph below. This graph depicts DeKeyser’s rolling 15-game average 5v5 Corsi For%. You have to like the elevator to the top this season. 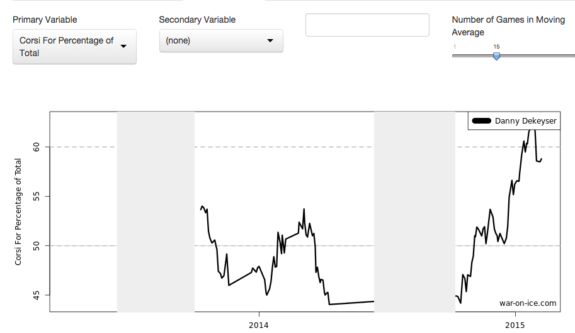 What Makes DeKeyser So Good?

After showing you the numbers, you have to wonder how this 24-year old kid with 126 games of NHL experience can put up numbers that allow him to be compared to Norris Trophy winners. From my observations, the key to DeKeyser’s game is simply that he thinks the game better than most anyone (save Jake Muzzin and a couple others) his age. He slows the game down and uses his superb skating ability and decision-making skills to make the right play. Check out his hockey IQ here as he recovers to find the open ice after his giveaway and then takes away both the shot and pass to prevent an easy empty net goal.

He’s rapidly earned the trust of Mike Babcock, playing more than 21 minutes a night against the 2nd highest level of competition among defensemen on his team. Most importantly, I can’t stress the fact that he’s just 24 years old. With him being signed for this season and next season at a cap hit of just $2.188 million AND he’s a restricted free agent at the end of the contract, you’d be hard-pressed to find a defenseman that is a better bargain than him right now. DeKeyser’s jersey number had always been #5 but he can’t wear it because it’s in the rafters. If DeKeyser continues to develop at his current rate, his #65 one day may join the #5 that’s already up there.