Dennis Cholowski started off his draft season without much fanfare, as the NHL Central Scouting service initially ranked him as a ‘C’ prospect, signifying a prospect expected to go in the middle rounds. Committed to play hockey next season at St. Cloud State University, Cholowski’s play in the BCHL had done little to inspire confidence he would be taken with a high draft pick in the 2016 Draft.

However, he improved in leaps and bounds this season, upping his point totals and leading his Chilliwack Chiefs squad on a deep playoff run as the team’s leading point scorer from the blueline. He also captured a gold medal in the World Jr. A Challenge in December playing alongside fellow first-round prospects Tyson Jost and Dante Fabbro for Team Canada.

Cholowski is one of the biggest risers among prospects this year, as his strong play has catapulted him from a mid-round prospect to one who has the look of a late first-rounder. His skating ability and puck skills are valuable to a team with aspirations of strong possession numbers, and his recent growth spurt hasn’t sapped him of his agility or strong edgework.

His passing ability and offensive instincts are impressive for a player out of the BCHL, as he is able to use strong gap control to steal the puck in his own end and then transition the play up to his forwards in the blink of an eye.

He’s no defensive slouch either, as he uses his long reach effectively to maintain good spacing on opposing forwards and relies more on sound man on man play to negate scoring chances than his physicality.

He’s a weapon on the power play thanks to his vision in the offensive zone, which led to an impressive 28 assists in the regular season and then 11 more in Chilliwack’s playoff run. His play in the World Jr. A Challenge really solidified his surprising draft stock boom, as he played alongside two of the best Junior A players in the country in Tyson Jost and Dante Fabbro and excelled on their journey to the gold medal.

He is still a candidate to slip out of the first round, however, as his recent growth spurt means he’s quite skinny and physically raw for a player in this age group and could definitely stand to pack on some muscle before entering the pro ranks.

His defensive instincts also aren’t quite as strong as his offensive abilities, as he was sheltered from playing on the penalty kill with the Chiefs and doesn’t possess strong defensive positioning.

His shot could also stand to improve, as for a player with his large frame his lack of strength shows in his relatively weak shot. His release is solid, though, suggesting he can eventually develop into a respectable shooter from the point.

Cholowski is a noticeable step down from the top tier of defenders eligible for the draft, be he still offers tantalizing upside as a late bloomer and someone whose ceiling remains somewhat of a mystery. His skating is a promising glimpse into what his ultimate upside could be, as a gifted puck moving defender who is able to take care of business in his own end and play big minutes in all situations.

He’s still very raw, as the highest competition he’s faced has been in the second-tier BCHL, but he’s committed to play at one of the top hockey programs in the country next season with the St. Cloud State Huskies. A team with depth that can afford to take a chance on Cholowski could do worse than to grab a player with his upside, allow him to develop at a slow pace in the men’s college ranks, and then have a pro-ready possession monster to plug into their lineup in three years’ time.

Cholowski has risen from a potential mid-round draft pick at the start of the season to a potential first rounder in 2016. The Pittsburgh Penguins’ success with smart, strong skating defensemen likely piqued the interest of many other organizations and the NHL in general is trending in the direction of smooth-skating possession defenders. Cholowski isn’t a lock to go in the first round, but his strong season in the BCHL shouldn’t see him drop further than the middle of the second round.

Two-way defenceman with good offensive instincts. Quarterbacks PP. Was outstanding during BCHL playoffs. He plays a steady game but not dimensional in any area. Retrieves pucks well and has a very good transition game with quick decisions and a crisp hard first pass to get his team started up ice. Mobility on the offensive point gives him the advantage in finding open lanes. Good gap control and good stick positioning defending the rush. Makes a good first pass. Intelligent player who keeps the game simple on the defensive and offensive sides of the game. Needs to bulk up and add strength.

Dennis Cholowski is a strong two-way defender. Offensively he moves the puck very well, with a strong first pass out of the zone to get the transition game started. He has good vision and can make tape-to-tape passes through small openings. Due to high-end hockey sense and IQ, Cholowski often makes the right play with the puck on his stick. Cholowski doesn’t have a cannon from the point, but it has decent power. Cholowski’s speed is slightly above average, but he could improve by working on being more explosive in his stride. In terms of lower body strength and power, he could stand to add some muscle.

Cholowski is an extremely raw young defenseman. He is very thin and undeveloped physically. He is an elegant skater who moves around the ice with great footwork and fluidity. While clearly lacking in strength, he still is able to zig-zag around the ice powerfully. He consistently breaks up plays with great stick positioning and makes it difficult for players to generate offense by constantly pestering puck carriers. Cholowski shows great vision through the middle of the ice and is a constant threat to expose mistakes with his quick identification of developing opportunities. He has everything that is very difficult to teach—anticipation, instincts and a long, athletic stride with great edges. On the other hand, everything that he lacks—such as strength and defensive positioning—can be taught.

Cholowski is a very raw prospect coming out of the BCHL, but his skating and passing ability from the back end are valuable assets that scream future NHLer. While he could still stand to gain strength and improve his play in his own end, Cholowski has the potential to develop into a future top-four NHL defenseman. He’s a player a team could draft, stash away to develop in college for a few seasons, and then have him step right into the lineup. 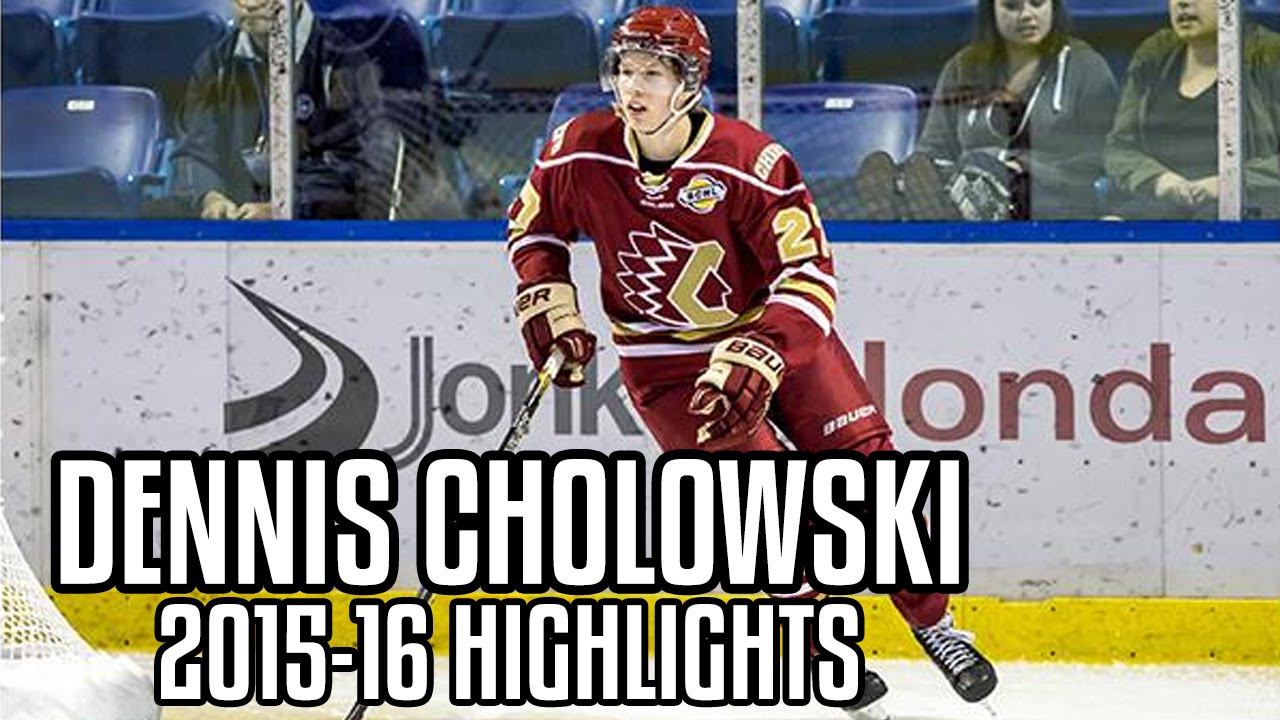 If Cholowski can maintain his first-round ranking and get taken inside the top 30 on Friday, it would be the first time in NHL history that three players from the BCHL (British Columbia Hockey League) are taken in the first round (following expected first round picks Tyson Jost and Dante Fabbro).