Those who know Henrik Lundqvist best were not one bit surprised how laser-focused and on top of his game he was Thursday night in Dallas.

After an inconsistent start to the 2016-17 season, Lundqvist found himself on the bench watching his backup, Antti Raanta, start four games in a row last week. It was the first time in his illustrious 12-year NHL career that a healthy Lundqvist had gone as many as four games without starting.

So, with many questions surrounding him and certainly all eyes on him, how does Lundqvist respond in his first game back between the pipes Thursday against the Stars? He stops all 27 shots in a 2-0 New York Rangers victory.

Not if you know Henrik Lundqvist.

“He Cherished the Pressure”

Marty Biron and Steve Valiquette each served the better part of three seasons as backup to Lundqvist in New York earlier in his career, and both are NHL television analysts now. So, it’s fair to say that both Biron and Valiquette qualify as knowledegable experts when the topic is Henrik Lundqvist and his return to the crease Thursday night.

This is what Valiquette told The Hockey Writers Friday morning:

“You can’t tell me everyone watching that game (Thursday) night wasn’t more focused on him then the team playing the Dallas Stars…and Henrik cherished it, cherished the pressure, because that’s who he is. He raises his level of focus and intensity in such situations, though it was a pressure from an angle he has has never felt in the NHL before. People doubting him, and it being so much pressure for a regular season game. However, it was typical of Henrik to rise to then occasion as he did.”

Lundqvist certainly did rise to the occasion. Not only did he help backstop a shutout in his return to the lineup, often in spectacular form, Lundqvist overcame being steamrolled by Stars’ forward Cody Eakin 9:19 into the game (more on that illegal hit below), a nasty welcome back message from which he was fortunate to recover quickly from.

He handled flurries of shots, most notably when Dallas was on one of its five power plays. Lundqvist was forced to be at his best during the second period when the Stars sent 18 shots his way, and he stopped each and every one.

With no room for error in a game that remained scoreless until Rick Nash netted a shortie for New York 7:08 into the third period, Lundqvist was, well, Lundqvist, perfect at every turn.

“I wasn’t surprised how well Hank played,” Biron told The Hockey Writers. “He had to be so pumped up to be back in there. Plus having had a chance to work on his game for a few days on the side (with goaltending coach Benoit Allaire) was a good combo. This is what I expected from Hank.”

In speaking with Biron on my Blueshirt Radio podcast earlier in the week, the long-time NHL goaltender explained that “you don’t become as great as Hank is without overcoming adversity along the way. This is another bit of adversity, and, knowing him, I’d expect he’ll rise to the top again.”

“I would bet that now he goes on one of his ridiculous tears where he steals points for the Rangers and we find ourselves in a month’s time laughing about the fact that some folks were even questioning him.”

Lundqvist is 34 years old, and his body of work is Hall of Fame-worthy already. Over his first 11 seasons, Lundqvist has won 30 or more games in all but the lockout-shortened 2012-13 campaign. His 387 career victories are the most in Rangers’ franchise history and two shy of equaling Dominik Hasek’s NHL record for European-born goaltenders.

Yet this season has been a battle for the man dubbed The King so many years ago. Through 22 appearances (21 starts), Lundqvist has a 2.44 goals against average and .916 save percentage, not dissimilar to his marks from a year ago (2.48 and .920), but certainly not on par with his career numbers.

More concerning has been the number of bad goals he has allowed, and how inconsistent his overall game has been.

Enter Raanta, who is 8-2-0 with a 1.67 GAA and .941 save percentage, a week on the bench, a storm cloud of “controversy”, and, yes, Thursday night’s game became a rather important one for Lundqvist. And he delivered in a big way.

“I went out there with a lot of desperation, in my approach,” stated Lundqvist postgame. “I felt it was an important game for me to just feel good. My game hasn’t changed over a week, but my mindset has obviously changed a little bit with everything that’s been going on. It’s a new experience for me; but I have to just approach it as just trying to go out there and help the team win.”

"I just want to go out there and try to help the team to win." – @HLundqvist30 after tonight's #NYR win in Dallas. pic.twitter.com/XHxq0ndcdS

Lundqvist’s return to the lineup almost ended prematurely when Dallas forward Cody Eakin inexplicably steamrolled the Rangers’ goaltender behind his net. Lundqvist, who was playing the puck, said he never saw Eakin coming at him and could not brace for the shocking hit he ultimately absorbed.

At full speed, Eakin surged into Lundqvist, his elbow seemingly hitting him square in the jaw. Lundqvist’s mask flew off, his stick careened into the corner, and down in a heap went a clearly-shaken Henrik. 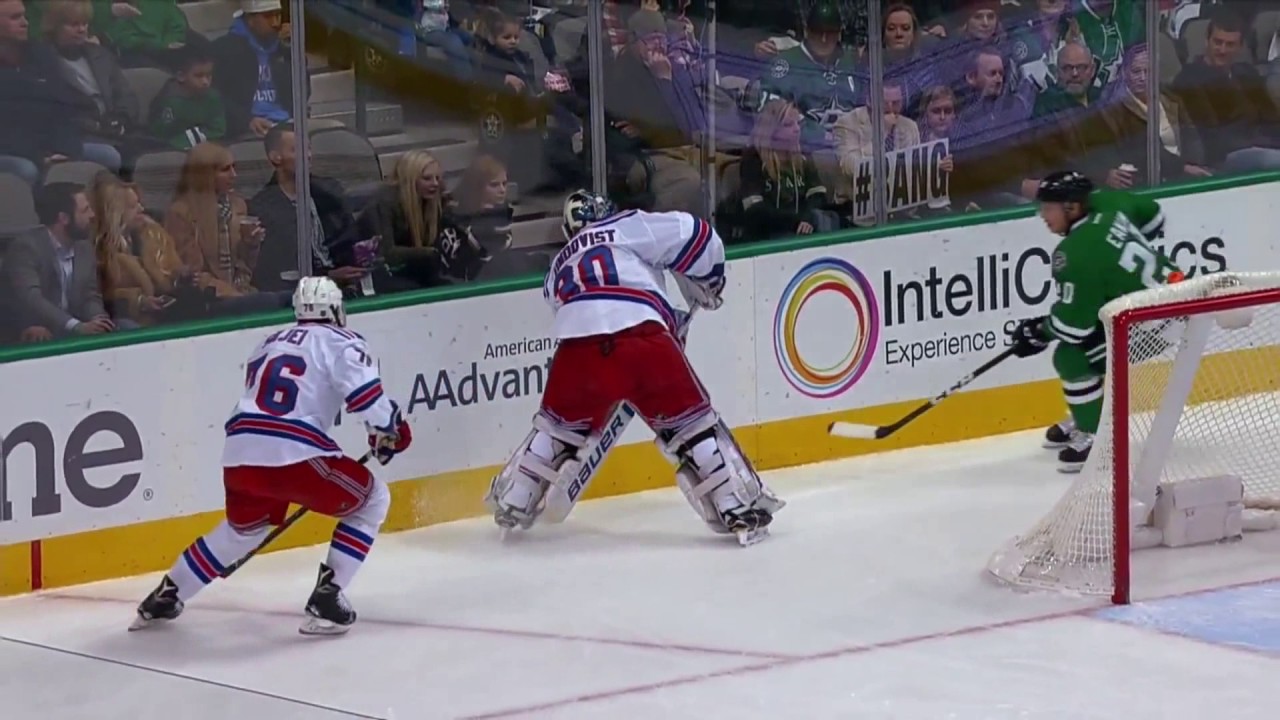 “It’s so much worse than a regular player being hit because we (goalies) are not expecting to be hit…so it makes you even more vulnerable and therefore even more of a dangerous play,” offered Valiquette. “Because the contact point of the hit is primarily the head, it is suspension-worthy without question.”

Dallas’ Cody Eakin will have a hearing this afternoon for charging NY Rangers’ Henrik Lundqvist.

Added Biron, “The hit was brutal. It should be a 10-game suspension. The only saving grace for Eakin is that Lundqvist came back and doesn’t seem injured.”

Eakin received a five-minute major and a game misconduct.

As for his explanation of what happened? Here’s what Eakin had to say postgame: