There’s no “home for the holidays” for the Detroit Red Wings, who head into December with a league-leading 16 games left for the calendar year in a make-or-break month.

For a team with playoff aspirations, they’ll get a good look at postseason talent as nine of the 16 December games are against playoff teams from last season. If it’s any consolation, only eight games come against teams currently in a playoff spot, a week after the notable Thanksgiving mark.

Consistency will be key for the young team as the Red Wings’ play has fluctuated in all three zones this season through 25 games.

It’s been a proverbial roller-coaster for the Red Wings, sitting at 11-11-3 and just two points out of a wild-card spot with three other teams in line.

They’ve been streakier than wiping off-brand Windex with sandpaper. An abysmal 1-7-2 start of purely bad hockey saw the Red Wings written off as early draft lottery favorites. When all seemed lost, the team bounced back and won nine of its next 11 games with fast, exciting play from the players of the future.

Dylan Larkin, 22, has continued to grow his game towards being a No. 1 center, totaling a team-leading 21 points (nine goals, 12 assists) through 25 games.

In net, Jimmy Howard (.922 save percentage) has been a large factor in his team’s success and newcomer Jonathan Bernier (.915 save percentage over his past six games) remains a solid backup. Howard’s play during a contract year has impressed other teams , as well, sparking rumors of teams calling for his services.

The offense has seen a boost under new assistant coach Dan Bylsma. The Red Wings are sixth in team faceoff percentage (52.1 percent), fifth in third-period goals (30), and an encouraging power play with confident cycling. While faster starts would go further, the Red Wings have become a stingy, aggressive group that has controlled play late in games during both wins and losses.

The Red Wings enter December after snapping a three-game skid with a late goal over St. Louis as they prepare to go through the ringer with seemingly non-stop hockey against dangerous opponents.

Any hopes of a playoff berth should rely on earning one of two wild-card spots in the east. Detroit sits sixth in the Atlantic Division and 10 points out of the top three, playoff-bound teams.

December will be pivotal in digging in and proving they have what it takes to continue their fight for the postseason. Thirteen of their 16 December contests come against Eastern Conference teams and seven of those games come against divisional rivals. That leaves a lot of points up for grabs at the halfway point heading into the New Year. 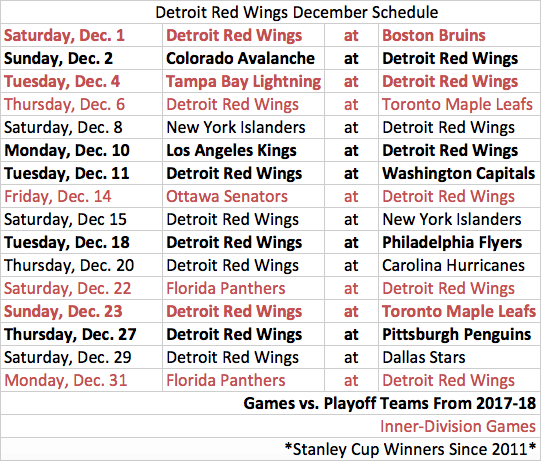 The Red Wings went a combined 13-20-8 against their upcoming December opponents last season and hold a combined 4-7 record against them through 25 games this year. The breakdown of the schedule doesn’t pose any relief, either, as just seven of their games are at Little Caesars Arena, where they hold a 7-5-2 record. They don’t play more than two consecutive home games in December.

Compare that to a 4-6-1 road record, where they’ll play nine games, including two, three-game road trips (Dec. 15-20 and Dec. 23-29) and four games against six of the past eight Stanley Cup Champions and it’s clear the danger the Red Wings face.

Other noteworthy opponents include the Tampa Bay Lightning and Toronto Maple Leafs, two divisional rivals that have had the Red Wings’ number over the past several seasons. Dating back to the start of the 2016-17 campaign, the Lightning have gone 9-0-1 against the Red Wings, while the Maple Leafs have gone 7-1-1 in that span.

The Red Wings’ entire season could come down to their success during the holiday season, as playoff aspirations could be crushed or bolstered. Anything short of a .500 month will lean the needle toward crushed, and their return to draft lottery favorite could be on the horizon.