The Detroit Red Wings were eliminated in the first round of the Stanley Cup Playoffs by the Tampa Bay Lightning in seven hard-fought games. Now, it is time to look towards next year and see ways in which they can improve their team in the hopes of making the playoffs once again and, possibly, all the way to the Stanley Cup Final.

The main reason the Red Wings have been so successful is because they developed a great deal of talent they currently have on the team through their prospects. Pavel Datsyuk, Henrik Zettergerg, Justin Abdelkader, Niklas Kronwall, Jimmy Howard and Petr Mrazek are just a few of the names that have become integral parts of the Red Wings recent success, all who were drafted by Detroit from the get go. It is clear that the Red Wings rely heavily on their drafting abilities and development of their players at the AHL level and below to maintain their talent above all else.  With that said, let’s take a look at some of the prospects the Red Wings have to see if they will be able to maintain their success through their in-house talent.

The Wings had high expectations for left wing Anthony Mantha. They drafted him 20th overall in 2013, after he ranked 10th in the QMJHL in scoring with 89 points and a league-leading 50 goals. He followed that up in the following season with 57 goals, leading the league once again, and 120 points in just 57 games. With plenty of scoring upside, the Wings thought Mantha would do very well with in the AHL with the Grand Rapids Griffins. Unfortunately for them, that was not the case. Mantha played in 62 games and only managed 15 goals and 33 points, leading to these comments from Red Wings’ Vice President Jim Devellano.

His performance in the Calder Cup playoffs thus far has also been underwhelming, scoring only two points, both assists, in the Griffins’ six games. Mantha has not developed as quickly as the Red Wings’ would have liked and the higher-ups in the organization seem to be very disheartened by it.

But it’s not like Mantha is the one and only prospect in the Wings’ organization. There are plenty of other players on the Griffins that have done fairly well down in Grand Rapids. Some, like Teemu Pulkkinen, have seen some NHL time.

Also a left winger, Pulkkinen was drafted in the fourth round of the 2010 NHL draft, but he has worked his way up the ranks and even cracked the NHL for an extended period of time this season. In his first full season with the Griffins in 2013-14, Pulkkinen netted 31 goals, the team and AHL rookie lead, and had 59 points in 71 games along with 11 points in 10 games in the 2014 Calder Cup playoffs.

He continued that solid play this season, with 34 goals and 61 points in 46 games with the Griffins, and also chipped in five goals and 8 points in 31 games with the Red Wings. Currently in the Calder Cup playoffs, Pulkkinen leads the team with nine goals and points. So while Mantha might need some more time down in Grand Rapids, Pulkkinen might be ready to take the next step to full-time NHL player next season.

Another player who cracked the Red Wing lineup this season was defenseman Alexy Marchenko. Drafted in the 7th round in 2011, the Russian had 18 points in 49 games a season ago down in the AHL before an ankle injury ended his rookie season. He came back this year and had 20 points in 51 games with a +/- of 22, one of the best marks on the team. He also played 12 games with the Wings and scored his first NHL goal.

He’s only played three games in the playoffs thus far for the Griffins, but Marchenko does have two assists in those games. Considered more of a defensive defenseman at 6’2 and 212 pounds, Marchenko is a piece that could be developed into a potential third pair defensemen next season for the Red Wings.

The Red Wing prospect pool goes beyond the Griffins, too. Eighteen-year-old Michigan-native Dylan Larkin is also showing some promise at the University of Michigan. Drafted 15th overall in the 2014 draft, Larkin scored 31 goals and 56 points in 60 games in the 2013-14 season on the United States National Under-18 Team.

In his first season with the University of Michigan, Larkin scored 15 goals and 47 points in 55 games and had five goals and seven points in five games with the United States World Junior Under-20 team. He is also currently with the United States at the World Championships, and has an assist to his credit in four games. Larkin certainly has a long way to go before he is considered ready to be an NHL player, but from what he has done at the collegiate and national level already, that’s a name people should be looking out for in the coming years.

There are also a few other players on the Griffins that have made names for themselves recently. Twenty-year-old forward Andreas Athanasiou spent his first full season in the AHL with the Griffins, amassing 16 goals, including the one below, and 32 points in 55 games. 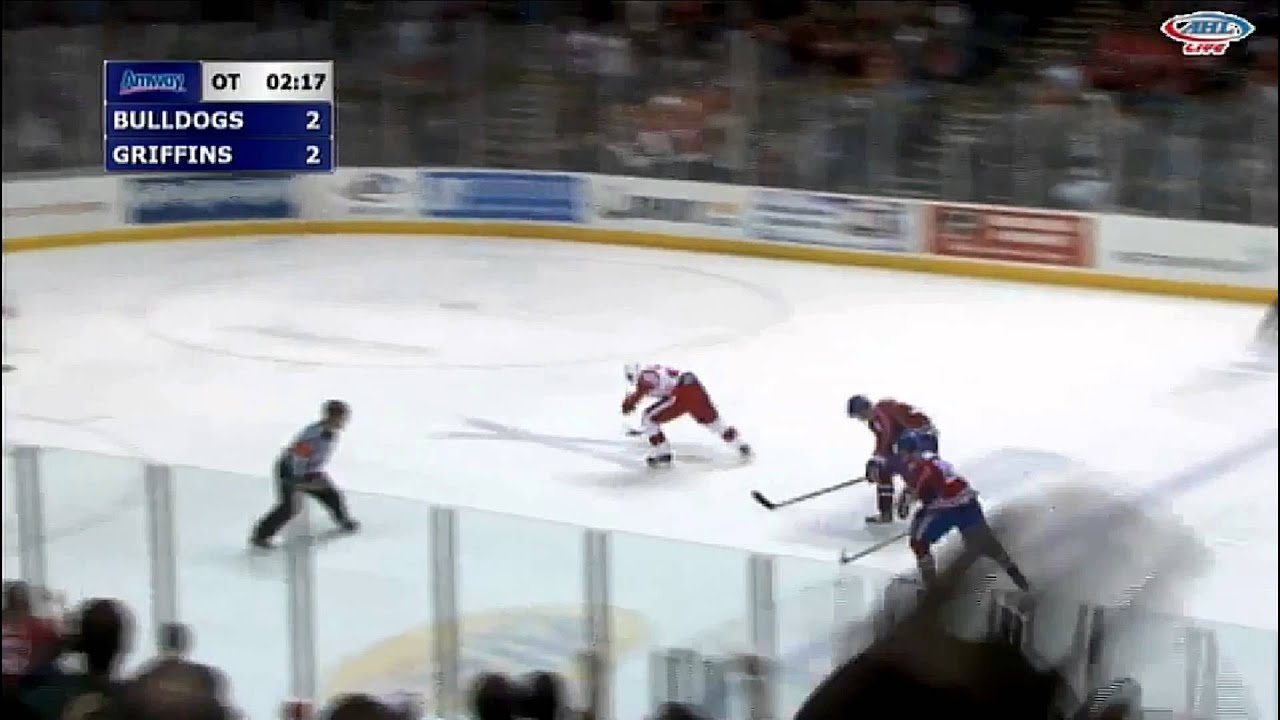 But it is what he has been doing in the playoffs for the Griffins that is what catches the eye. He is second behind Pulkkinen in goals with four, two of them on the man advantage, and is averaging a point per game. With the ability to score highlight-reel goals and a hot start to this year’s playoffs, perhaps Athanasiou is a diamond in the rough.

Another player who has stepped up in the Calder Cup playoffs is Tomas Nosek. The Czech Republic forward was signed to a two-year entry-level deal before the start of this year. The center led his Czech ExtraLiga team Pardubice in goals with 19 and points (44) in the 2013-14 season, and chipped in 11 goals and 34 points in 55 games this season with the Griffins.

Much like his teammate Athanasiou, Nosek has stepped up his game in the playoffs, with two goals and five points in six games. Both goals, one of them shown below, came against the Toronto Marlies in Game 4 to force a decisive Game 5 for Grand Rapids that they ended up winning to move on to the next round. Athanasiou also had a goal that game. 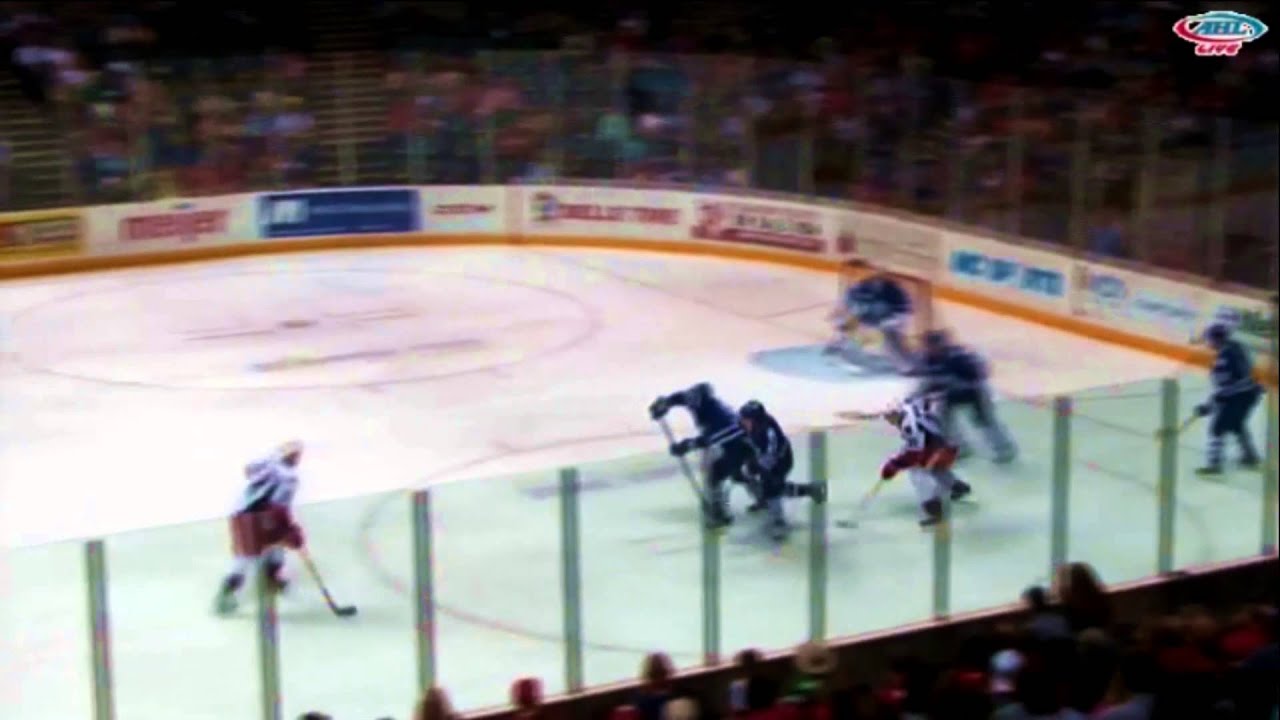 While Mantha might not be developing the way the Wings had hoped he would, there are plenty of other prospects like Pulkkinen and Marchenko who could be NHL ready this upcoming season, surprises like Athanasiou  and Nosek and youngsters like Larkin who could develop into very impressive talents.

So there is no need to worry if you’re the Detroit Red Wings. Much like in year’s past, there is plenty of talent in your system.