Currently clinging to an eighth place slot in a playoff scenario that can best be described as precarious, the Detroit Red Wings have a lot to worry about before the season wraps up. Top amongst those concerns is securing a playoff spot for a 22nd straight year. Amidst the playoff discussion, the Red Wings focus less on youth and more on trusted experience.

However,  many key components to the Red Wings’ long term success lie about 160 miles northwest of Detroit in Grand Rapids. The Red Wings are notorious around the NHL for allowing players to develop until they are “over ripe” and ready to not just play–but have real success at the NHL level.

Here’s a short look at one highlighted prospect at each offensive position. This is the first in a series of such highlights.

Nicknamed Ironhook, Calle Jarnkrok will be a mainstay in Detroit for years to come if he maintains his current course of development.

Fresh off of a trip to Grand Rapids from his native Sweden, top prospect Calle Jarnkrok got his first real taste of the game in North America. While he is currently ranked as the top Detroit prospect, his North American trip was an eye opening experience. As a European player, Jarnkrok is used to playing on a larger rink with smaller players in a less physical style. At 176 lb, Jarnkrok is in need of a little bit more mass, and Ansar Khan agrees.

Once Jarnkrok gains this size, the possibilites are endless for him.  He has drawn comparisons (in Ansar Kahn’s article)  to both Pavel Datsyuk in terms of skating ability and Henrik Zetterberg’s skill with the puck.

Jarnkrok also brings the Red Wings versatility, since he can play on the wing as well. His right handed shot adds to his value on a top line.

Given his skill set and top-end puckhandling abilities, Red Wings fans have every reason to by very optimistic about Jarnkrok.

With the emergence of Gustav Nyquist  as a fixture with the Red Wings, Tomas Tatar has been the odd man out. The fact of the matter is that Nyquist and Tatar are similar players. Both are speedy and have great playmaking ability. Unfortunately for Tatar, the Red Wings have been giving the time with “the big club” to Nyquist.  This does not mean that Tatar should be forgot about. The exact opposite is true.

Given the fact that Tatar has tremendous experience playing with Nyquist in Grand Rapids, a Detroit line centered by Nyquist with Tatar on the wing would allow for even more chemistry to develop between the two young scorers.

The fact of the matter is that Tatar needs more playing time in Detroit to become the player that the Red Wings need him to be. Tatar becomes a restricted free agent at the end of the 2013-2014 season, and if he does not get playing time in Detroit, it would not be at all surprising to see him sign an offer sheet from another club who can assure him of a role in the NHL. 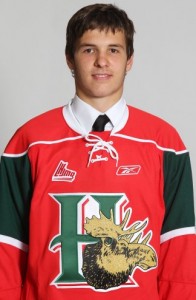 Martin Frk’s biggest advantage in the Red Wings prospect pool is the way that he combines his size (6ft, 198 lb) with his shooting ability.

This video highlights some of Frk’s best moments so far, and in many of them the common theme is his willingness to work in close to the net.

Although HockeysFuture calls him a very raw prospect, Frk is working hard to improve his game. The efforts are paying off. In March, Frk had a career night, scoring five goals on eight points. Although it is just a single game, this effort could be seen as a metaphor for the work effort Frk brings to the ice every night.

While Frk hasn’t played in Grand Rapids yet, outings like that tell us that he is well on his way.

Frk’s size in the Red Wing prospect pool cannot be emphasized enough. His development is important to Detroit’s future plans  because having a player of his stature on a line automatically increases ability to crash for rebounds and score goals in the tight area around the net. This is a quality lacking in a group built of more than a few undersized players.

The ideal identity for Frk would be that of the power forward in the top six, and at very least a gritty penalty killer and big-bodied scorer on a checking line.

Even though Detroit won’t be seeing  a Tatar-Jarnkrok-Frk line just yet, these three players are making themselves stand out in the pool of prospects the Red Wings will rely on in the future.