After a hard-fought and gritty game seven in Anaheim, the Detroit Red Wings emerged victorious over the Ducks. This series was a treat to watch for fans of both teams, and had all the elements of a series to remember.

A tough Detroit team expected to be played hard and physically by the number two seeded Ducks, as the Ducks expected emotional performances from the Red Wings, who ran the table at the end of the season to secure the number seven seed.

Both teams got exactly what they expected.

As the Ducks salute their home crowd and prepare their golf gear, the Red Wings have to prepare for a dynamic Chicago Blackhawks team in the next round. They will lean heavily on these three stars of the first round:

On paper, Jimmy Howard didn’t have a series for the record books. A .911 save percentage and a 2.74 GAA are solid, but not spectacular statistics for Howard.

This is a classic example of statistics not telling close to the whole story.

Howard was rock solid all through the series, and at times his performance was nothing short of extraordinary. He held top-end scorer Corey Perry to exactly zero goals, and flashed leather on shots that it seemed were out of his sight. He kept his composure, even on goals that he had no chance on. Howard’s mental toughness will serve him well against the oft-frustrating Blackhawks.

Howard couldn’t have picked a better time in his career to play his best hockey. 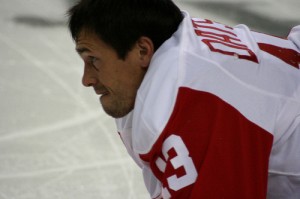 Hockey announcers are running out of superlatives to describe the play of Pavel Datsyuk. One thing is for sure though. Datsyuk is a threat to score or set up a scoring chance whenever he is on the ice.

What Henrik Zetterberg lacked in the first five games of the series, Pavel Datsyuk made up for. Datsyuk sets a great example for the youth on this team by showing what wearing an “A” on the front of your sweater is all about, which is stepping up when the team needs you most.

In the series against the Ducks, Datsyuk came through when he was needed most. No matter if he was dangling though the Duck defense to roof a backhander (game six) or sniping from the circle to tie it up (game four), Datsyuk can do it all on offense. The quarterfinals saw him break up countless plays in the neutral zone and pick many pockets as the Ducks attempted to set up on offense. Datsyuk is truly the best three zone player in the world, and he is living up to that lofty title. 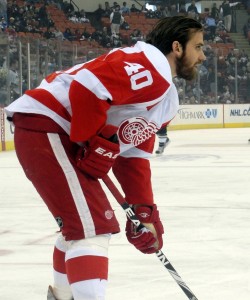 At the beginning of the season, there was little doubt in the minds of the  Red Wings brass about Henrik Zetterberg’s leadership potential.

Although he slumped at points during the regular season and the Red Wings quarterfinal series, Zetterberg showed us what hockey leadership is in the last two games.

Zetterberg currently leads the Red Wings this post-season in shots (30), points (8), assists (5), and is tied with Johan Franzen for first in goals (3).

Additionally, his overtime winner in game six at Joe Louis Arena kept the Red Wings alive and dashed the Ducks’ desire to extinguish the Red Wings at their own rink.

“Curly Fries” as he is affectionately called in Detroit will continue to lead from the front as the Red Wings look to extend their improbable 2013 run.