Many of the greats won in the Garden State. A handful of contributors, Martin Brodeur, Scott Stevens, Scott Niedermayer, Ken Daneyko and Sergei Brylin hoisted the Stanley Cup on three occasions with the New Jersey Devils. Other stars such as Brendan Shanahan, Kirk Muller and Pat Verbeek were able to lift Lord Stanley elsewhere around the league.

However, not every player is fortunate enough to have impeccable timing on their side. Below we look at some of the best without a title and some still thirsting for a drink from the chalice.

This may soon change as the Minneapolis, Minnesota native has his Minnesota Wild atop the Western Conference as of this writing. In his time with the Devils, he “missed it by that much.” After the Devils won their third Stanley Cup, the team drafted Parise in the first round of the 2003 NHL Entry Draft. 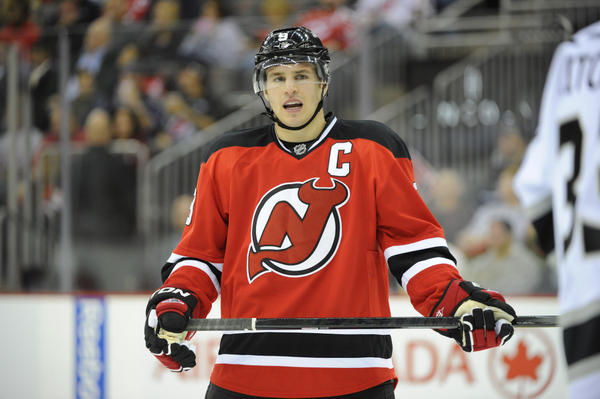 Following an AHL All-Star season with the Albany River Rats during the 2004-05 lockout season, the talented left wing joined the Devils but the aforementioned three defensemen were either retired or had moved on.

Posting five 30-plus goal campaigns, including a career-high 45 in 2008-09, Parise ranks fourth in club history with 194 tallies. During his final season with the Devils, No. 9 was named the captain and scored a postseason best eight markers in 2012, before the team bowed out against the Los Angeles Kings in the Stanley Cup Final.

Before an early “retirement” to the KHL, the Russian-born superstar toiled for 12 seasons in the NHL. Despite a pair of 52-goal seasons and a Maurice Richard Trophy in 2003-04, Kovalchuk and his Atlanta Thrashers only made the playoffs once. 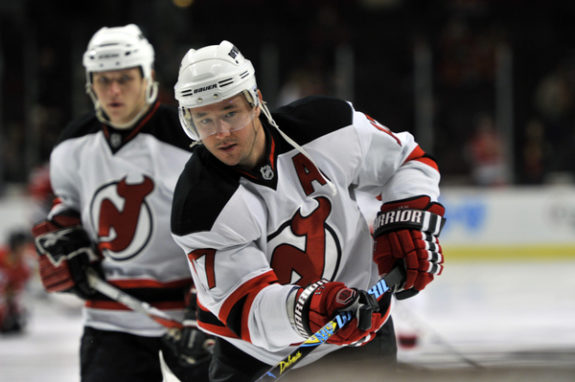 After being dealt to the Devils in 2010, the offensive-minded forward helped the squad earn an Atlantic Division crown but they would suffer a first round exit.

During his time with the Devils, Kovalchuk would earn an All-Star nod and notched a pair of 30-plus goal campaigns. Like Parise, his best opportunity was 2012 when he helped the club earn an Eastern Conference crown, netting a postseason-high eight markers.

Nicholls played parts of two seasons with the Devils from the 1992-93 campaign through 1993-94. The talented center obtained from the Edmonton Oilers was a fan favorite in his short time in New Jersey. During his 84 games in a Devils sweater, he tallied 24 goals. In their run to the 1994 Eastern Conference Finals, Nicholls registered 13 points.

A career which saw the three-time All-Star post 475 goals, also yielded a lot of close calls in playing for the Stanley Cup. Even with Wayne Gretzky and Luc Robitaille, his Los Angeles Kings teams never reached the promise land. He reached the Conference Finals with the 1991-92 Oilers, as their dynasty was winding down. Came up shy with the Devils before their run started. The following season Nicholls was on a Chicago Blackhawks team which was eliminated in the Conference Finals by the Detroit Red Wings. 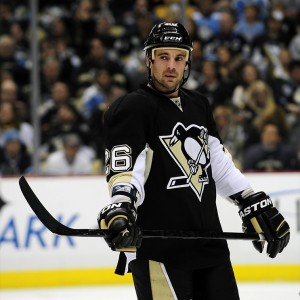 After winning a Calder Cup with the 1994-95 River Rats, the Devils called up Sullivan for parts of the 1995-96 and 1996-97 campaigns. The “Timmins Tornado” provided a spark for the club before being traded to the Toronto Maple Leafs in the Doug Gilmour deal.

His closest shot came as a 20-goal scorer with the 1998-99 Leafs, who lost to the Buffalo Sabres in the Conference Finals. Following many years with the Blackhawks during their lean seasons and the not quite ready for prime time Nashville Predators, Sullivan joined the 2011-12 Pittsburgh Penguins, who were upset in the opening round of the playoffs.

The speedy right wing had a solid career of 1,011 games and 290 goals but missed out on runs in New Jersey, Chicago and Pittsburgh.

In parts of three seasons with the Devils, Souray and his blistering shot on the blue line was a member of a pair of Atlantic Division winners. However, he would be traded to the Montreal Canadiens for Vladimir Malakhov in 2000 and the Devils went on to win the Stanley Cup.

Recording 300 points and 1,145 penalty minutes, the big Elk Point, Alberta native was a three-time All-Star but his teams in Montreal, Edmonton and Anaheim never advanced beyond the second round of the postseason.

Much like Souray, Morrison was on two division title winners with the Devils, before being swapped to the Vancouver Canucks for Alexander Mogilny in 2000, as New Jersey would go on to win the Stanley Cup. Despite being paired up with Markus Naslund and Todd Bertuzzi, Morrison’s Canucks’ teams only advanced as far as the second round of the playoffs.

The former Michigan Wolverines Hobey Baker winner would finish out his career with stops in Anaheim, Dallas, Calgary and Chicago. In 934 games, Morrison netted 200 goals and totaled 601 points.

Acquired from the New York Islanders near the end of the 2001-02 campaign, Vanbiesbrouck only played a handful of contests with the Devils. Backing up Brodeur, he was a member of New Jersey’s Stanley Cup finalist squad, before they fell to the Colorado Avalanche.

The “Beezer” also came up shy against the Avalanche during the 1995-96 Final while as a starter with the Florida Panthers. A three-time All-Star with the Panthers, Vanbiesbrouck also won a Vezina Trophy with the 1985-86 New York Rangers. The Detroit, Michigan native won 374 games and recorded 40 shutouts in his career.