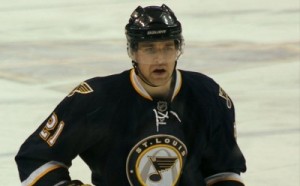 The St. Louis Blues are not letting game one of their Western Conference Quarterfinal Series bring their spirits down.

After a game that saw the Blues out-shoot the San Jose Sharks 42-34 (14-8 in the first overtime period), Sharks winger Martin Havlat found the back of the net to put the Sharks up 1-0 in the best-of-seven series.  It was Havlat’s second goal of the game and it came at 3:34 of the second overtime period.

“I was just trying to get it on net and I got a shot through and it went it,” Havlat said after the game. “It was a great play by Ryane [Clowe] to get me the puck. The puck was rolling a little bit and I saw it went it. It was a great feeling. My first thought was that it was time to get some rest.”

One would think that the differences in each locker room would be night-and-day.  This was not the case, as the Blues players were happy with their effort and looked forward to game two of the series.

“I think we played really good today,” said forward Patrik Berglund, who scored both Blues goals in the 3-2 loss.  “We shot the puck a lot and got some traffic in front of the net.  Overall, I think the third period was our best.  We had a bunch of zone time and [we] created a lot of scoring chances.  We [have] to build from that, regroup and go at it Saturday.

“We believe we can beat these guys.”

Havlat scored the first goal of the series in the second period to give the Sharks the 1-0 lead heading into the third period.  Berglund scored his first career playoff goal in the first minute of the third period, deflecting in a shot from Shattenkirk.

“I saw some space to the outside of [Niemi] on the ice,” Shattenkirk said.  “Bergie does a good job getting to the net and getting his big body in there and getting a piece of it.”

Berglund added another goal just 6:34 later, when teammate Andy McDonald led a three-on-two charge while on the power-play.  Berglund received the puck in the slot and beat Niemi clean on a low wrist shot.

Despite the Blues carrying the momentum for most of the third period, San Jose stormed back with a goal from forward Andrew Desjardins at 14:44 of the third period.  Center Tommy Wingels broke in on the wing and threw the puck in front of the Blues’ net and Desjardins was there to rifle home the game-tying goal.

“I think the goal that hurt us the most was the second goal,” Blues Head Coach Ken Hitchcock said.  “We were really playing well [and we] weren’t giving up anything.  The second goal was the one that really hurt us because it gave them a chance.  We were really in good control of the hockey game.”

The game-winning goal came off a play where the Blues simply could not clear their defensive zone.  After a strong forecheck from Ryane Clowe and Logan Couture, Havlat was able to capitalize.

“There were a lot of errors on the goal,” Hitchcock said.  “It’s unfortunate.  We [should have] had it cleared three or four times.  [We] didn’t win a race to the boards either.  It’s disappointing.  We played a very good hockey game but that’s playoffs.”

“I don’t think we came out with the start that we wanted to in the second overtime,” said defenseman Kevin Shattenkirk, who had a game-high 11 shots.  “It was something that we can definitely learn from and something that we can look at tomorrow and look at video and say that this is the way that we need to be playing.”

Hitchcock was not concerned about his young players’ reaction to losing their first game in the playoffs.

“We weren’t in awe of anything.  We made a couple of mistakes and they ended up costing us.  Both teams played hard [and both] teams played good.  I thought we were a little bit better later in the game than they were but their big players stepped up.

“We did a lot of good things.  It’s hard to complain about the effort but you’re disappointed in the effort on the overtime goal.”

Goaltender Antti Niemi made 40 saves in game one (Gary A. Vasquez-US PRESSWIRE).

Sharks goalie Antti Niemi made 40 saves on 42 shots, but the Blues’ lone goal-scorer thinks that the Blues can pressure him harder in the next contest.

“I don’t think he took up a whole lot of space,” Berglund said.  “Obviously, he made some good saves today but he goes down a lot and we [have] to get the puck upstairs.”

Friday’s practice was full of video sessions for the players and coaches mentoring the team on how their opponents can be beaten.

After all, this team has never been one to beat themselves up over a loss.  Under Hitchcock, the Blues posted a 15-7-4 record the game after suffering a regulation or overtime loss in the regular season.  A good coach and a strong core of captains and veterans help a team bounce back quicker than others.

“Any time you lose, you don’t want to stand and live on the just-abouts, so we’re going to have to make some adjustments.”

The Blues will host the Sharks in game two of this series at Scottrade Center Saturday night at 7:30 EST.