Drew Doughty was described by teammate Anze Kopitar as the” Los Angeles’ Nicklas Lidstrom“. Despite not owning the individual hardware that Lidstrom has in his trophy case, the two-time Stanley Cup Champion and two time Olympic Gold Medalist has shined on Daryl Sutter’s blue line.

During the regular season, Doughty’s stats didn’t explode out of the box score. He ranked 30th in the league in points among defensemen. But Doughty’s offensive production is not completely his fault: in Daryl Sutter’s system, defenseman are not supposed to be creating offensive opportunities. However, Doughty brings ‘A game’ when the lights shine the brightest. With seven points in the Western Conference Finals versus the Chicago Blackhawks and four in the final three games versus the San Jose Sharks in the Western Quarterfinals, Doughty understands what it means to be a clutch player. He lead the league in postseason points among defensemen, and he boasted a .69 points per game average, which was 47% higher than his .47 PPG average during the regular season. Doughty shined under the bright lights of the world stage, scoring four goals and adding on two assists while in Russia during the Sochi Winter Olympics.

In case Doughty’s offensive numbers don’t inspire you, the Kings offensive production when he is on the ice should. As the chart below shows, as Travis Yost of the SportingNews writes, the Kings thrive when the Canadian born defender is on the ice. Thankfully for the Kings faithful fans, Doughty has logged the fifth most minutes per game in the league during the regular season. During the playoffs, he approached an average of 30 minutes of ice time per game. Here is the chart that Yost provides: 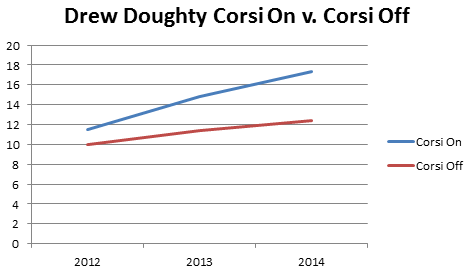 Doughty’s vision separates him from his competitors. He uses his quick hands to isolate defenders with one touch passes, but also can stretch the ice with cross ice saucer passes that open up attacking lanes into the opponents defensive zone and creates odd man rushes. He keeps his head up when shooting the puck and can fire rockets that can be impossible for goaltenders to stop. He has outstanding speed and a quick burst so that he can glide around defenders. He utilizes his long strides to ward off attackers and uses his strong stick checking skills to neutralize the opposition.

Owning a +17 rating, Doughty has the ability to lock opponents. He delivers furious body checks, and uses his hips to shift with flashy forwards entering the Kings defensive zone. This season, Doughty set a new career high for defensive point shares, finishing the 2013-2014 campaign with 6.6. Rick Nash, the New York Rangers leading goal scorer, was held without a point when going head-to-head with Doughty. Joe Pavelski, the Sharks leading scorer, didn’t touch the scoring column in the final three games of the Kings comeback series victory. Shutting down the opposition’s best player highly increases the Kings chances of winning the game.

Doughty’s excellent hockey senses take over on the power play, where he logged 43% of his points. He can terrorize the box with his dangerous playmaking skills. Doughty seems to understand where to be at all times, and knows where on the ice his teammates are. Doughty’s well-rounded game gives the Kings the edge in terms of mismatches, which creates all sorts of different possibilites when Sutter creates matchups on the powerplay. His great passing ability allows his teammates to have more time and space, due to the opponents focusing their attention on the powerful shot and playmaking ability of Doughty.

With such impressive skills at both ends of the ice, Doughty has received lots of attention across the league. Ryan McDonagh, the Rangers star defenseman, was touted as the “Rangers Drew Doughty”. That’s high praise for a player who was one spot behind Doughty for points by defensemen in the playoffs. Bob Murray, the General Manager of the Anaheim Ducks, coined Doughty as the difference between the crosstown rivals. Murray stressed the importance for having a game changer on the blue line, and Doughty no doubt qualifies as such. Just ask the Rangers.