The Edmonton Oilers kicked off training camp this week and currently have 33 forwards competing for 13 spots.

There are a lot of returnees from last years team that posted the 5th worst offense in 2014-15 with 2.35 goals per game average. The only teams worse were Carolina, New Jersey, Arizona and Buffalo not exactly the best company for the Oilers.

Still  the arrival of Connor McDavid has everyone buzzing in Edmonton.

Is McDavid the piece to push the Oilers over the edge? Even if McDavid scores twenty goals as expected the Oilers offense will only move to 21st overall barring improvements from the current team in place.

The Oilers are heavily relying on the returning core of Taylor Hall, Jordan Eberle, Ryan Nugent-Hopkins, Beniot Pouliot and Nail Yakupov to carry much of the offensive burden around McDavid.

Still there are plenty of questions in the Oilers bottom six which creates for a competitive camp.

With the arrival of McDavid five of the six positions on the Oilers first and second lines are set with a battle between Nail Yakupov and Teddy Purcell for the prestigious first-line RW job.

If you really break the training camp roster down there are 17 of 33 players vying for positions.

The next two weeks will conclude the jockeying of positions for the season opener with Rob Klinkhammer, Tyler Pitlick, Luke Gazdic, Iiro Pakarinen and Kale Kessy trying to lock down the fourth-line RW and spare forward jobs.

The assumption is that one of those spots will belong to Klinkhammer who is a UFA at the end of the year.

It’s a big year for Pitlick who is in now or never territory with the Oilers and coming into camp healthy gives him his best shot at a roster spot.

Pakarinen, 24, is in the last year of his entry-level contract and had 28 points in 39 games in the AHL last season. In 17 games with the Oilers Pakarinen only scored 3 points but he’s got a strong two-way game and can play with and without the puck, something that gives him an edge over the one dimensional Gazdic.

Do the Oilers keep Gazdic on the main roster to give them some toughness?

Kessy, 23, is the last of the group and missed all but 17 games in the AHL so that hurts his chances a little and the Oilers might want to give him another development year.

They still don’t know what they have with Kessy and he’s also in his last year and will be an RFA next summer.

Here is a sneak peak of what the roster is shaping up as heading into the season opener: 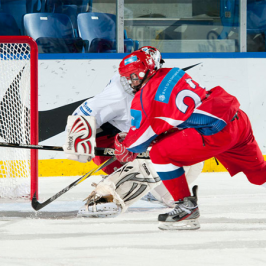 If there is any one word to describe the Oilers AHL affiliate this year it’s possibilities.

Peter Chiarelli has done a fantastic job this summer putting this roster together and has a number of players on AHL contracts.

Two names of note are Marco Roy and Phil McRae.

Roy, 21, was a 2013 second-round pick by the Oilers who never got an ELC. Roy was allowed to re-enter the 2015 NHL Draft, went unclaimed and the Oilers have given him a shot with an AHL deal to see if he can still develop into a bottom-six two-way forward.

McRae, 25, was a 2008 second-round pick by the St.Louis Blues who turned pro in 2010-11 but injuries derailed what looked like a promising career as a second or third-line physical center. McRae’s ELC was up, the Blues sent him a qualifying offer and instead he went over to Finland for a year before coming back to a mixed bag of results last year.

McRae needs a full year and at the very least is a serviceable AHL center who gives the Oilers some much needed depth down the middle in Bakersfield this season.

Cole Sanford has made it to main camp and has impressed so far. Sanford, 20, is coming off back-to-back 70 plus point seasons and a 50-goal year last season.

The Barons offense dried up last season and it’s due to down years from Oiler prospects like Jujhar Khaira and Mitch Moroz adjusting to the pro game.

Khaira and Moroz are two prospects the Oilers have a lot of stock in for potential third-line jobs in the future.

Bogdan Yakimov, 21, enters his second year as a pro and had 28 points in 57 games last year. The hope is that Yakimov makes a natural center choice to play with newcomer Anton Slepyshev to make a fantastic duo on the farm.

Greg Chase and Kyle Platzer turn pro this season as well so this is going to be a team with some depth.

But we haven’t even talked about the biggest piece; Leon Draisaitl.

Draisaitl turns pro this year and has been a force through his junior career helping the WHL Kelowna Rockets win the 2015 Mastercard Memorial Cup winning the Tournament MVP honors as well.

Draisaitl, 20, a 2014 third overall pick looks destined to have a future on the wing in Edmonton and not at center as he was drafted.

Still the Oilers made a massive mistake with Draisaitl last year by putting him in the NHL when he wasn’t ready. His 9 points in 37 games is proof of that.

They won’t make the same mistake twice and Draisaitl will likely start the year on the farm and along with Slepyshev are the first two likely recalls for injury on the main roster in scoring roles.

A dominating year in the AHL will force the Oilers hand to make room for him later in the season if he’s ready.

The 2013 third round pick will play his third year in the NCAA with University Mass-Lowell. Campbell scored 12 goals and 27 points in 34 games last season and will get another top six role this season. Timeline to Edmonton is still unknown.

Horak left the Oilers at the end of 2013-14 and joined the KHL where he’s currently an alternate captain for Vityaz Podolsk. Horak scored 18 goals and 31 points in 53 games last year and the Oilers still own his NHL rights but it’s unlikely Horak ever rejoins Edmonton.

The 2013 fourth round pick will  play his second year in the NCAA with Western Michigan University. He didn’t exactly produce strong numbers last season scoring just 6 goals in 36 games but it’s still early to say if he ever turns into an NHL player.

Tyrvainen left the Oilers at the end of the 2012-13 season and the Oilers (like with Horak) own his NHL rights still. Tyrvainen scored 24 points in 87 games in the AHL during parts of two seasons before returning to Finland. He’s currently an alternate captain with Ilves.

The 2014 sixth round pick is a long shot at best, he’s small in stature at 5’11 181lbs and the Oilers already have too many of these prospects in the system. Still Vesel is productive having scored 23 points in 39 games with the NCAA University of Nebrasks-Omaha. He’ll return for another year.

There was hope this summer that the Oilers might be able to get Zharkov to come to North America but the 2012 third round pick will stay in the KHL with Torpedo Nizhny Novgorod. It’s unknown if Zharkov will commit to the Oilers but the intrigue will always be there with a  6’4 207lbs player.