COLUMBUS, Ohio — Leon Draisaitl had a goal and two assists, Mikko Koskinen made 30 saves and the Edmonton Oilers beat the Columbus Blue Jackets 4-0 on Saturday.

The Oilers used a three-goal second period to pull away from the Blue Jackets, who had won three of four and are fighting to stay above the wild-card line in the Eastern Conference.

Koskinen improved to 18-15-4 with his fourth career shutout — all this season.

Zack Kassian and Alex Chiasson also scored for the Oilers, who are 4-1-1 in their last six after a five-game losing streak. Connor McDavid had three assists. 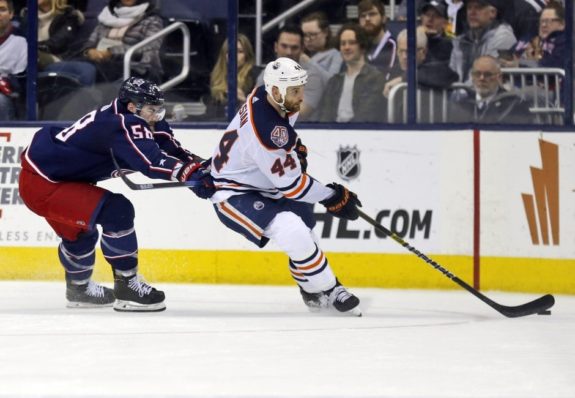 Kassian broke Brandon Dubinsky’s eye socket in a fight in his previous game at Columbus.

Sergei Bobrovsky had 15 saves for Columbus before he was pulled after two periods. Joonas Korpisalo stopped each of the five shots he faces, but Columbus still couldn’t generate any offence.

Kassian got his 10th of the season 6:27 into the game, going high to beat Bobrovsky from the right circle off a cross-ice pass from Draisaitl.

Early in the second period, the Oilers had their way for a long stretch in the Columbus zone, picking at the edges until McDavid circled around the net and fed Currie, who scored his second of the season at 5:07.

Draisaitl then buried a shot from the right circle after a give-and-go with McDavid, making it 3-0 at 8:53. Draisaitl became the third NHL player to reach 40 goals this season, behind only Washington’s Alex Ovechkin and Chicago’s Patrick Kane.

Chiasson broke a 21-game goal drought when he scored the Oilers’ fourth late in the second, eliciting boos from the Nationwide Arena crowd.

NOTES: Draisaitl is 32nd Edmonton player to have a 40-plus goal season. He has eight goals and seven assists in the last 10 games. … McDavid has five points in his last three games. He has 90 this season, third in the NHL.