By Angie Lewis and Keara Dowd

At first thought, it is easy to dismiss the Jaromir Jagr to Washington talks as unfounded rumors.  It’s easy to think that it would be a terrible idea for the Caps to consider taking the Czech star back ten years after he first joined the team.  It’s easy to think he has nothing left, and that signing him would be an even bigger mistake than the first contract turned out to be.

Go a little deeper, and becomes clear that not every aspect of a potential deal between Jagr and the Caps would be bad.  There are some pros to signing the former NHL star, however faded that star may seem.

It would be risky, but the Caps can afford that risk for the right price.  The last experience with Jagr can’t be used as an indicator of what this time around would be.  It is a different team with different players in a different situation.  If Jagr has more left in the tank, his complementary skillset as a potential top-6 forward could be exactly what the Capitals need to take it to the next level. 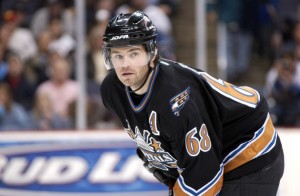 Then Angie steps in…

The Washington Capitals’ situation is not the same as it was about ten years ago when Jaromir Jagr was brought to the team. The team is finally a playoff contender year-in and year-out. As Keara said, Jagr is not a stand-alone type of player, unlike what the Caps previously thought when they traded for him in 2001. With Jagr being a complementary player, I can see how a stint in Washington would go differently than his first go-around with the Caps. However, different does not equal better.

As a long-time hockey enthusiast, I would actually like to see Jagr back in the NHL. However, Jagr in Washington would disrupt the flow of where the Caps are trying to go with this team, and would only be justified as a desperate move if no one else wants to sign in DC. Not to mention Jagr’s reception in DC if he returns may not be so warm.