A four-game stretch for the Calgary Flames went relatively well in the eleventh week of the NHL season, but pretty much all games were overshadowed by the first one, played on Tuesday December 10th.  Not because it was against one of the top teams in the Eastern Conference, the big bad Boston Bruins. The only storyline that mattered was that Jarome Iginla was finally home. 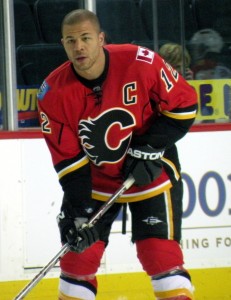 Well, the former Flames captain hasn’t actually called the Saddledome “home” since late March, but from the welcome he received in his first return to Calgary, it was clear where Iginla’s roots will always be firmly planted.
A short but sweet tribute to the franchise’s all-time scoring leader began the game, followed by a standing ovation from an ecstatic and electric crowd. The game itself, however, was not quite as exciting.
Most expected the Flames to be stomped mercilessly by the Bruins, who have won four of their last five games. Instead, the entire first period remained scoreless, with Boston only recording five shots on net to Calgary’s eleven. Shots on goal remained pretty consistently low throughout the second. The middle frame drew only one goal, a wrist shot from Jiri Hudler at 5:17.
And just over halfway into the third, when Calgary Flames began to hope netminder Reto Berra would nab his very first NHL shutout, the Bruins got themselves on the scoreboard. The tying goal came courtesy of David Krejci, who deflected Torey Krug’s shot into the net. Just over a minute later, Reilly Smith put the visiting team ahead, and Tuuka Rask denied the Flames of any equalizing attempts until the final buzzer sounded.
The disappointment of the loss seemed to be quickly forgotten by Flames fans when Iginla was named third star of the game. Two laps around the ice (the second prompted by the Bruins themselves) had Iggy flashing his trademark teddy-bear smile the whole way through.

Just like the game day against Boston, the buzz around the Calgary Flames was unusually loud on Thursday December 16th, but it was not due to the looming matchup against the Carolina Hurricanes. It was because suddenly and seemingly out of nowhere, general manager Jay Feaster was out of a job.
The announcement came just before noon, and an ensuing press conference by Brian Burke cited Feaster’s firing simply due to a need for change. Alternatively, Burke assured his audience that no more big changes were coming, despite some murmurs that coach Bob Hartley was next in line to get the axe.
And once again, the slow-moving, low-scoring game that night against the Canes was overshadowed by the events of earlier that day.
The first period was scoreless, and it almost stayed that way throughout the second if not for a wrister by Brian McGrattan that beat Hurricanes goalie Justin Peters in the dying minutes of the period.
Midway through the third, Jeff Skinner answered back for Carolina. Skinner has played phenomenally since returning from injury, and his tying goal against Calgary gave him his seventh goal in his last six games.
The game required an extra frame to determine a winner, and in the end it was Chris Butler’s wrist shot that lifted the Flames to a 2-1 win over the Carolina Hurricanes.

If one trend could be established so far in the week, it would be a ridiculously low offense. Sean Monahan, second only to Mike Cammalleri for the team lead in goals with nine, hoped to remedy that in his return to the lineup against the Buffalo Sabres Saturday after suffering from a hairline fracture to his foot.
Unfortunately, the Flames’ newest golden boy was held off the scoresheet in his debut back from injury and yet again the team found themselves in a low-scoring game.
In fact, this time the first forty minutes did not produce a goal from either team.
Matt Moulson and Paul Byron scored for the Sabres and Flames, respectively, three minutes apart early in the third. The score remained tied for the duration of regulation, and overtime was needed.
But this time, Matt Stajan wasted no time ensuring that the Flames picked up the coveted two points, scoring the game-winning goal just 42 seconds into the OT period.
Calgary came out on top for the second game in a row with a final tally of 2-1.

The Flames finally broke out of their offensive slump in their final game of the week against the New York Rangers. And while there weren’t exactly goals galore a la Penguins-Flyers in the first round of the 2012 Stanley Cup Playoffs, both teams at least managed to put a couple pucks into the net before the first period rounded out.
Mikael Backlund struck first for the Flames with a powerplay goal at the seven-minute mark. Curtis Glencross doubled the lead shortly after, and the Rangers’ Derek Stepan cut it right back down to one within 25 seconds of Glencross’ goal.
Halfway into the second, Carl Hagelin closed the gap completely.
Working to get his stride back after sitting out two weeks, Sean Monahan potted his tenth goal of the season four minutes into the third period, but the Flames’ lead didn’t last long. With less than ten minutes left to play, Chris Kreider knotted things up 3-3.
For the third game in a row, the Flames headed to overtime, but unlike the previous matchups against the Hurricanes and the Sabres, the extra frame solved nothing.
So off to the shootout they went. The Rangers and Flames mimicked each other’s shoot-and-stop attempts and it took seven rounds and a missed shot by Mikael Backlund to end the game with a score of 4-3 New York.

Five points in one week is a rather big accomplishment for the 26th place Flames. Perhaps going through a rollercoaster of highs (Iginla’s return) and lows (Feaster’s firing) works in the team’s favour, and with the league’s most productive rookie back in the lineup things could be looking brighter in Calgary.

Stay tuned for Week Twelve of The Flames Files and follow the Calgary Flames’ progress in the 2013-2014 season.