With just over a month until the NHL regular season begins, there is a significant lack of buzz surrounding the Calgary Flames. The general consensus around the league is that the team will finish near the very bottom by the end of April, so it certainly isn’t the most promising season for the Flames and their fans. But with several big names gone and another presumed to be announcing retirement at summer’s end, the heat is now on some of the players on the roster who were previously overshadowed.

First up on the list is Mikael Backlund. Backlund is still considered to be one of the youngsters of the group but has been on the roster for 4 seasons. But bad luck and injuries hindered the 24-year old centerman and Backlund never got a chance to live up to the hype. When healthy, Backlund is a solid two-way center. He’s got more experience on NHL ice than a lot of the other players on the roster and is one of the few familiar faces left on the team. It’s time for Backlund to assume more of a leadership role amongst his younger teammates, and keep himself injury-free so he can help out the team offensively this season.

Sven Baertschi has been highly touted as the next big thing for the Flames since his debut with the team two years ago, and the hype isn’t for nothing. At his age, most players are still mainstays in the juniors and Sven has played his fair share of NHL games. But constantly being shuttled back and forth between Calgary and Abbotsford clearly affected the Swiss winger’s confidence, and the effects were evident on the ice. More ice time means a better performance from the 20-year old, who will surely be given ample chance to prove himself this season. Baertschi’s natural talent is undeniable, and this may be the year where his development progresses at an unnatural rate. 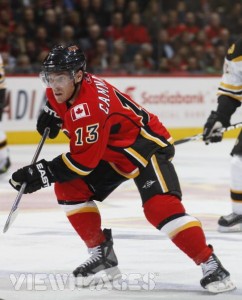 With a total of 3 seasons with the Flames under his belt, and 9 seasons in the NHL altogether, Mike Cammalleri is one of the few remaining veterans on the team. Cammalleri was once known as a 20-goal or more scorer (in his very first season as a Flame, he tallied 39 goals) but his point production has dwindled of late. Because of his less-than-stellar performance with the team, it is speculated that he will be shipped out of Calgary halfway through the season. But if Cammalleri can start playing like he was playing 5 years ago, there is a pretty good chance he can step up and lead the team, and possibly even trade that ‘A’ for a ‘C.’

The pressure is on in Calgary as the rebuild era begins. Success might not be immediate but if these three players (and hopefully the rest of the team) start off the season right, the team’s development to become a legitimate contender may be right on track.

The NHL regular season schedule was released on Friday. Check out our partners at TiqIQ for the best deals on Calgary Flames tickets for all 2013-14 games.