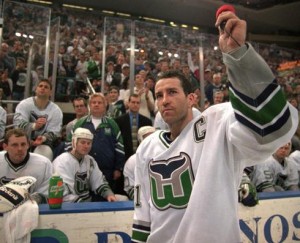 The last time the Panthers won a playoff game, current head coach Kevin Dineen was a Hartford Whaler, a team that no longer exists.

The Panthers won Game 2 of their first round series against the New Jersey Devils last night for the team’s first playoff win since April 17, 1997. Fans were excited to enjoy a playoff win that was fifteen years and fourteen seasons in the making. A lot has changed with the team, the league, and the country since that day in 1997.

-During the 1996-1997 NHL season, the Hartford Whalers and the Mighty Ducks of Anaheim were teams in the NHL. What’s more, current Panthers head coach Kevin Dineen was a player on that Whalers team!

-For the 1996-1997 NHL season, the Florida Panthers still played in Miami Arena. Of course, now the Cats play in the BankAtlantic Center in Sunrise, Florida.

-During the 1996-1997 season, Ray Sheppard led the Panthers with 29 goals and 60 points, and John Vanbiesbrouck was the Cats’ goaltender.

-Since the 1996-1997 season, twenty-nine different teams in the National Hockey League have played in the postseason. For those keeping score at home, that’s every franchise in the NHL.

-Stephen Weiss played in 638 career games as a Panther starting in the 2001-2002 season including one playoff game and scored 144 goals and 390 points.

-Since the 1996-1997 NHL season, the city of Atlanta has gained their second NHL team and lost that same NHL team to Winnipeg.

-From the 1996-1997 NHL season until yesterday, the BankAtlantic Center, which opened for the 1998-1999 NHL season, has also been named the Broward County Civic Arena, the National Car Rental Center, and the Office Depot Center

-In 1997, Bill Clinton was President of the United States of America. Since then, we’ve had two more Presidents – George W. Bush and Barack Obama.

-Finally, in 1997, Steve Jobs returned to Apple to become its Chief Executive Officer

A lot of time has passed since the Florida Panthers won their last playoff game, and many things have happened. The Panthers are surely different as is the NHL and our world.