The New York Islanders threw everything they had, and more, at Flyers goalie Steve Mason on Monday night. The seven-year veteran saw an astounding 46 shots on net in Philadelphia’s first trip of the season to Long Island, while remarkably stopping all of them. Mason’s 46 saves, however, weren’t enough to steal the extra point as the Flyers fell to the Islanders in a 1-0 shootout loss. Say what?

The Reward for Mason’s 46 Saves

Steve Mason’s 4-6-2 record is in no way indicative of how the 26-year-old netminder has played in his last three outings. Throughout that span, Mason has given up four goals on 102 shots for a .961 save percentage. And despite a 1-1-1 mark in his last three, Mason has stood tall.

So how does the former Blue Jacket have only one win to show for his incredible stretch of brilliance?

The math is basic. When the Flyers score, they win. In Mason’s last two losses, Philadelphia has failed to give him any goal support whatsoever, getting shutout for the second and third time of the season.

The compensation for Philadelphia’s fragile defensive core has caused head coach Craig Berube to dress seven defensemen in their last two games. But with four goals against Sergei Bobrovsky and the Columbus Blue Jackets on Saturday night, it’s difficult to pin the blame solely on their shorthanded forwards unit.

“The last two games I felt our teams getting back on track, structurally-wise, competing, the work ethic,” Berube said before his team was outshot by a 46-21 margin. “I think we’re back going in the right direction.”

Over his last three starts, Steve Mason has stopped 98 of 102 shots, good for a .961 save percentage. #StoneCold #Flyers

Had it not been for Mason standing on his head on Monday, though, the Islanders would’ve most certainly collected their points in an easier fashion. Jack Capuano’s squad pressured the Flyers on all ends, forechecking and backchecking their opponent as if they were stitched to the inseam of their sweaters. This, of course, resulted in an astronomical amount of odd-man rushes, which Mason stunningly stuffed every time.

Mason is the only reason why the game was close. He made a spectacular glove save on (Frans) Nielsen in the first period and a key sprawling stop, with a little help from the post, early in the second frame on Johnny Boychuk. Mason’s most important stop came on a Tavares wraparound attempt with nearly 10 minutes remaining in the third period. He finished the game with 46 saves. — Tim Riday, CSN Philly

Mason’s crusade in net stole the spotlight from Isles starter Jaroslav Halak, who gained his third shutout of the season, with 21 saves of his own. And despite not even seeing half the shots Mason was forced to halt, he shunned every single one his team counted on him to stop.

Little did the Flyers know at the time, Halak’s shorthanded save on Couturier in the first period would turn out to be a foreshadowing moment as to how the night would end for the not so Broad Street Bullies.

Winless in the Shootout, Still

Whether it’s a mental handicap, or an actual skill deficiency, the Flyers are flat out not good in the shootout. And while a storybook ending on Monday night would’ve resulted in Steve Mason stealing the extra point away from the Isles, staring in the face of Philadelphia’s kryptonite, the reality of the Flyers’ shootout situation slammed the orange and black back down to earth.

The shootout may still be infuriating, but it’s impossible to feel like the Flyers were cheated out of a victory tonight due to the skills competition. If not for Mason, this game would have been over by the midpoint of the second period, if not sooner. — Charlie O’Connor, Broad Street Hockey

After being outplayed for the duration of an entire game, yes, the single point feels like anything but a crummy consolation prize for showing up. But with the latest shootout loss, the Flyers now fall to 0-3 in shootouts on the season, which to date, is the worst mark in the entire league.

Scott Laughton and Claude Giroux were stymied by a stingy Halak, who pushed the Flyers’ shootout contestants to one-for-10 on the season, which holds up as 14th in the league among teams who have attempted 10 or more shots in the tie-breaking stanza. Philadelphia’s 10 percent shootout shooting percentage is even uglier when 15 other teams have attempted less than 10 shots. 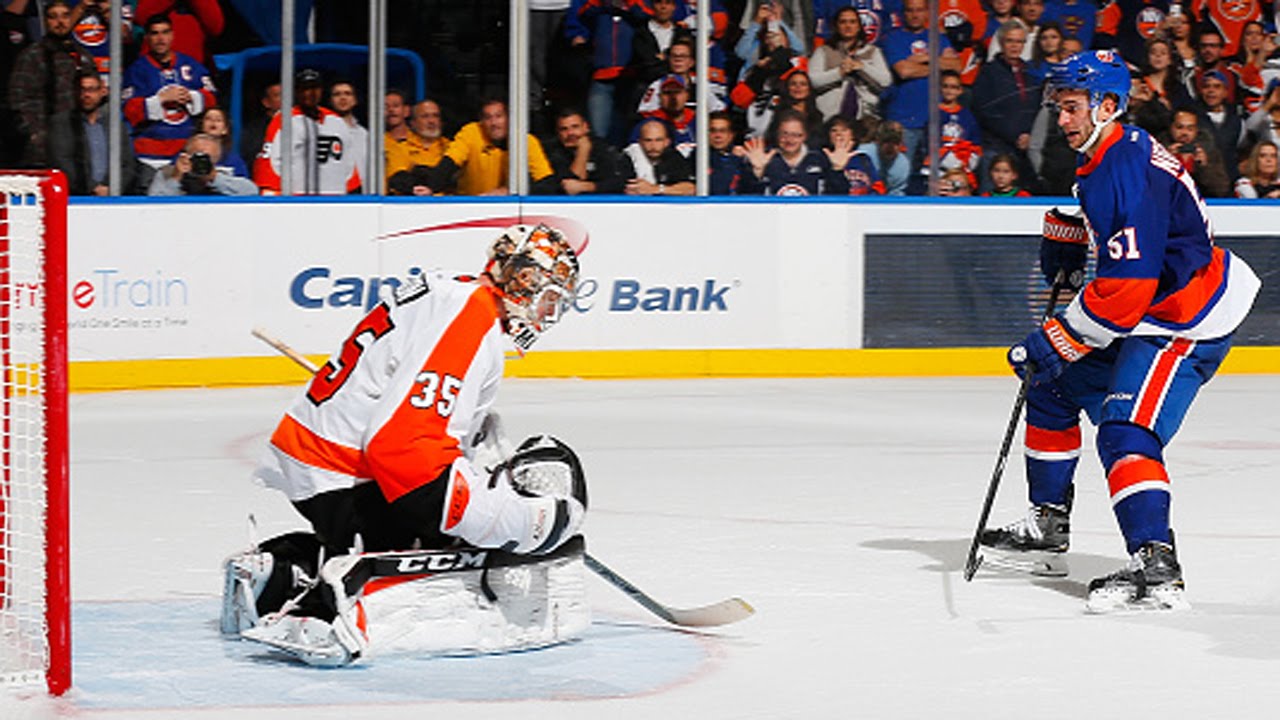 “Hopefully down the road that point will help us in the playoffs, but we left another point out there,” said Mason after his tremendous effort. “It’s unacceptable. I don’t know what else to say.”

Not only have the Flyers failed to score a shootout goal from anyone this season not named Claude Giroux, their 0-3 record extends their “skills competition” struggles to 3-11 dating back to last season. Philly’s last shootout win, which feels like a decade ago, was celebrated on Dec. 30th of last season, although it’s understandable if the memory of it is a bit foggy. It’s been eight straight shootouts without a win now, after all.

While everyone is in agreement that the loss is on anyone but Mason, the Flyers cannot afford to continue to be the worst team in the league when it comes to the shootout. Whether or not anyone disagrees with the format, it’s existence is plain reality. Not only is it not going anywhere, it shouldn’t. It’s the same format for all 30 teams, making any complaints appear to be juvenile and petty.

The Islanders, on the other hand, are a perfect 5-0 in the shootout this season, which are an added five points. How important are those points? Consider the fact that the Isles are now one of five teams with 30 points, and tied with Pittsburgh for the Metropolitan Division lead. They sure don’t seem to have a problem finding a way to get it done.

It wouldn’t be a Flyers Backcheck without mentioning Jake Voracek’s race for the NHL’s scoring title. Monday didn’t prove to be as fruitful for the Flyers’ top right winger, losing minimal ground in the race. Pittsburgh’s Sidney Crosby closed the gap, though, tying Voracek with his 29th point on the season by scoring his ninth goal of the season, and adding two assists against Boston.

Monday’s scoreless tilt, however, was only Voracek’s third of the season – coming exclusively in games the Flyers have been shutout in. Translation: if Jake isn’t scoring, nobody’s scoring.

Crosby’s mark against the Bruins, though, snapped a two-game scoreless skid, leaving the defending Hart Trophy winner with seven games without a point on the season. Claude Giroux has gone five games now without scoring a point.

The Flyers received some good news earlier on Monday, revealing a possible early return of forward Michael Raffl. With six goals and an assist through 12 games, the possible return on Saturday against the Rangers would be significantly welcomed by his team, who’ve gone 3-4-1 in his absence.

“When I’m on the ice it doesn’t really bother me, but when it swells up, I still walk like an idiot,” said Raffl over the weekend.

After finally solving the Columbus Blue Jackets on Saturday night, the Flyers will get another shot at redemption against a Metropolitan Division rival. This time, it’ll be against the New York Rangers. But before they do, they’ll travel to Detroit for a game against the Red Wings on Wednesday.

The Flyers will then host the Rangers on Black Friday before returning to MSG for yet another back-to-back. Philly’s second trip back to Broadway will begin a five-game road trip, which includes a trip out west before concluding in Columbus on Dec. 9th.

The Flyers are now 2-6-1 on the road now, losing five straight. Yikes is right.