Team Canada’s World Junior camp is well underway now with less than two weeks until Boxing Day. Though the team is waiting for decisions on some eligible players in the NHL, and cuts still do need to be made, the goalie duo has been chosen.

As we’ve seen in many years past, there’s no clearcut No. 1 goalie. Just two solid netminders.

“They’ve got to compete and they’ve got to prove themselves. They’ve got to have the right attitude and so far we’re very pleased with Eric and Zach because they’re both competitors… I think that’s what we need and it’s a healthy competition among the two of them.” – Benoit Groulx. Toronto Star. Published: Dec. 12, 2014.

Comrie and Fucale are two remarkably similar goalies in their style of play, but when it comes to numbers and experience, they’re worlds apart.

Let’s assess the situation, shall we?

An Edmonton native, Comrie actually spent a good deal of his young career playing in the Los Angeles Selects program. Comrie’s family moved to Newport Beach when he was nine and after six years playing in California, he was drafted 13th overall by the Tri-City Americans. Now 19-years-old, Comrie is part of the Winnipeg Jets organization after being drafted 59th overall in 2013.

Though not as experienced in international play as Fucale, Comrie has made an appearance at the World U-17 Hockey Challenge and has won gold at the U-18 Ivan Hlinka Tournament.

His Junior playoff resume is short, only playing in 6 postseason games, but Comrie already has some professional experience. After the 2013-14 WHL season had concluded, he joined the St. John’s IceCaps in their run to the Calder Cup finals and ended up playing in two games.

Currently, Comrie is one of the top goalies in the WHL. His .921 SV% is the best in the league, and he’s on a career-high pace for wins with a 14-10-0 record to start the season. 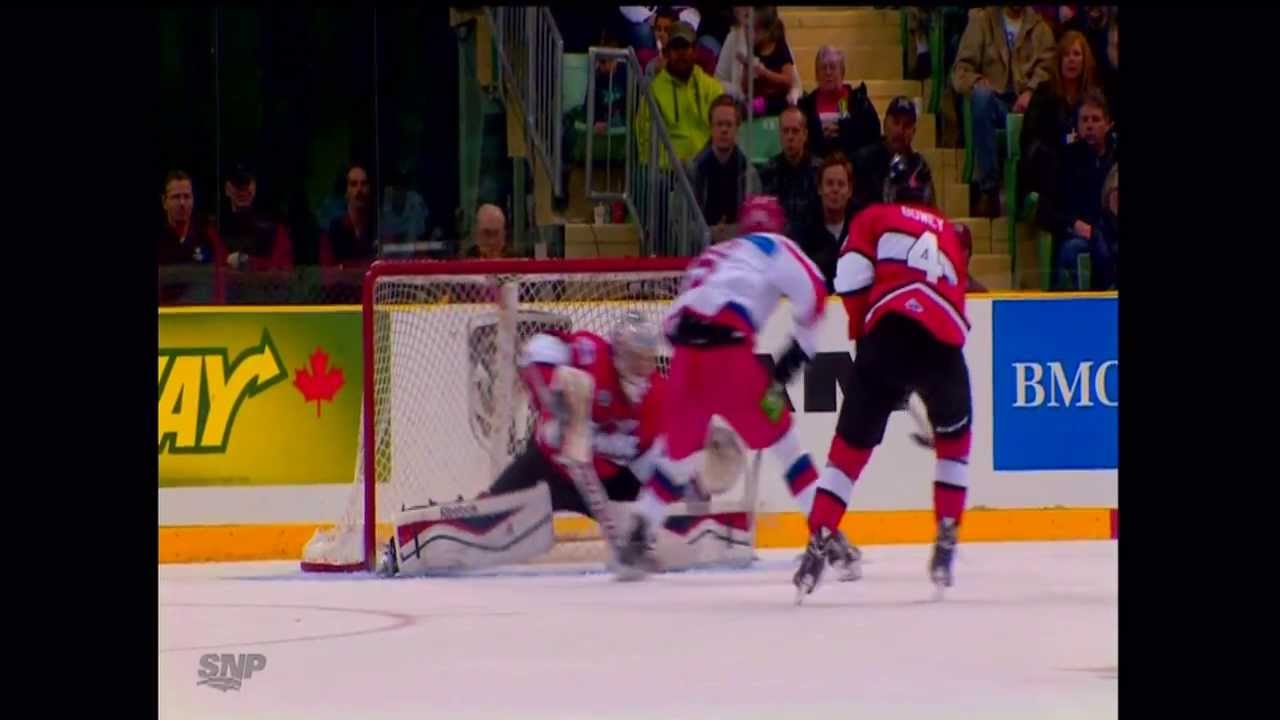 Drafted 11th overall by the Halifax Mooseheads in 2011, Fucale has been the go-to guy ever since he came into the QMJHL at age 16. He played 58 games his first season in Junior, posting an impressive 32-18-10 record. Fucale, a Laval native, was drafted 36th overall by the Montreal Canadiens in 2013.

Under his belt, Fucale has 49 playoff appearances, a President’s Cup and a Memorial Cup. He’s won gold at the U-18 Ivan Hlinka Tournament and has already been named to Canada’s World Junior squad in the past, playing five games in Sweden during the 2014 WJC.

Fucale has been the recipient of an extremely well-built Mooseheads squad, and some say it has masked the fact that he isn’t as impressive as his record states. Teammates for most of his Junior career with Nathan MacKinnon, Nikolaj Ehlers and Jonathan Drouin, Fucale hasn’t exactly been a part of poorly equipped teams.

But his stats wouldn’t give that away.

In his four years in the QMJHL, Fucale hasn’t had a SV% above .909. Though the league is the most offensively-based of the CHL, those numbers are nothing special.

Pick One & Just One

The recipe for success isn’t necessarily deciding which goalie will just start the tournament. It’s picking one, and sticking with only one.

Through Canada’s five-year gold drought, each team has had one thing in common. Goalie controversy.

During either the round robin or the playoffs, there was never a clearcut starting goaltender. Whether it was Mark Visentin and Olivier Roy, or Malcom Subban and Jordan Binnington, a lack of consistency had neither goalie outplaying the other.

The last time Canada had an outright No. 1 goalie was 2009. The result was gold.

Dustin Tokarski was Canada’s obvious starter, and the team played him that way. His partner, Chet Pickard, played the two gimmes in the round robin against Kazakhstan and Germany to give Tokarski a break between the important games. Tokarski played the opener against the Czechs, the New Year’s Eve Classic against the Americans, and he finished off the tournament in the playoffs.

If I had to make one goalie my starter on Boxing Day, I’d go with Fucale and ignore the success Comrie has had this season. Experience is much more important in a tournament that lasts just two weeks.

You either win with your No. 1, or you go down swinging.  None of this sharing nonsense.