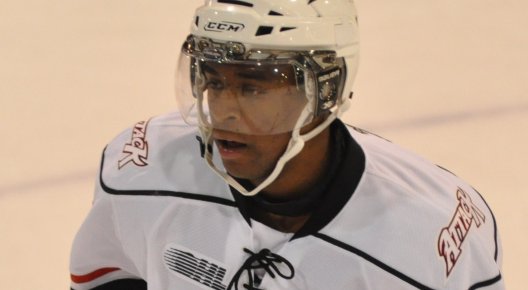 Size isn’t everything, but it may be the only major shortcoming for Ontario Hockey League stand-out Gemel Smith.

A native of Toronto, Ontario, Smith burst into OHL as a rookie last season and played 66 games, earning 16 points. He upped his game in the playoffs, playing a key role in 21 games during the Owen Sound Attack’s run to the OHL Championship and a Memorial Cup appearance. He continued his strong play this year, upping his offensive output to 60 points, including 21 goals.

Third in team scoring, Smith’s biggest assets are his speed and tenacity. He never stops moving and never stops trying to help his team win. He’s also a bit streaky, offensively. He was great in October, with 20 points in 13 games. He was also really good in February, with 10 assists in 12 games. He had 30 points over the rest of the season. Figuring out a way to smooth out those peaks and valleys would greatly improve his production.

That said, Smith’s best trait may be his versatility. He scored seven power-play goals, two short-handed goals and two game-winning goals. He was used in every situation and the numbers bear out that he wasn’t too shabby in any of them. Such results can only help boost his confidence and encourage the Owen Sound coaching staff to give him even more chances to shine.

It’s not likely that the NHL Draft will have 30 teams lining up to take Gemel Smith right away. At 5-9 and 155 pounds, he’s small by NHL standards. That makes him a bit of a project. However, if he can continue to develop, he’s got the tools to possibly prove his critics wrong.

In the New NHL, after all, size isn’t everything. It’s just one of many things.

“The 17-year-old has excellent wheels, is very shifty and can elude defenders with ease, good vision and hockey sense, plays bigger than his size and battles hard every shift, is dependable at both ends of the rink, has a high compete level, and all-round outstanding offensive instincts. He simply creates nearly every time he sets foot on the ice, and plays to win.”
-Dan Sallows, Future Considerations

Smith won a bronze medal as part of Team Canada at the IIHF Under-18 World Championships. He had five points at the tournament.

Upside could be Scott Gomez, a shifty top-line forward.