While one might expect 24/7 coverage of this rare feat, the city of Los Angeles can’t seem to handle that task.  Despite having the second largest media market in the United States, LA’s media outlets are generally struggling to keep up with…well…who the Kings actually are.  The franchise has essentially gift wrapped an overnight success story for local news outlets, only to see it blundered multiple times in less than two weeks.

Here is the recent string of bloopers:

It began innocently enough on May 14th when NBC4 in Los Angeles put up a graphic for the city’s three playoff-bound winter sports teams.  While the graphic should have included LA’s two NBA teams – the Lakers and Clippers, along with the Kings as their NHL representative, somehow the NBA’s Sacramento Kings found their way into hockey’s place.  Yahoo’s Puck Daddy has the screencap here.  Though rather embarrassing, this is a somewhat understandable mistake.  Someone involved in the broadcast probably saw the label “Kings” without thinking twice about it and went forward with it.  It’s only a one time occurrence, these things happen, and the station apologized for it afterwards.

Cue the Fox11 broadcast in Los Angeles just days later on May 17th.  If the NBC4 mistake was unprofessional, there are simply no words to describe how poor this segment was on the Kings: 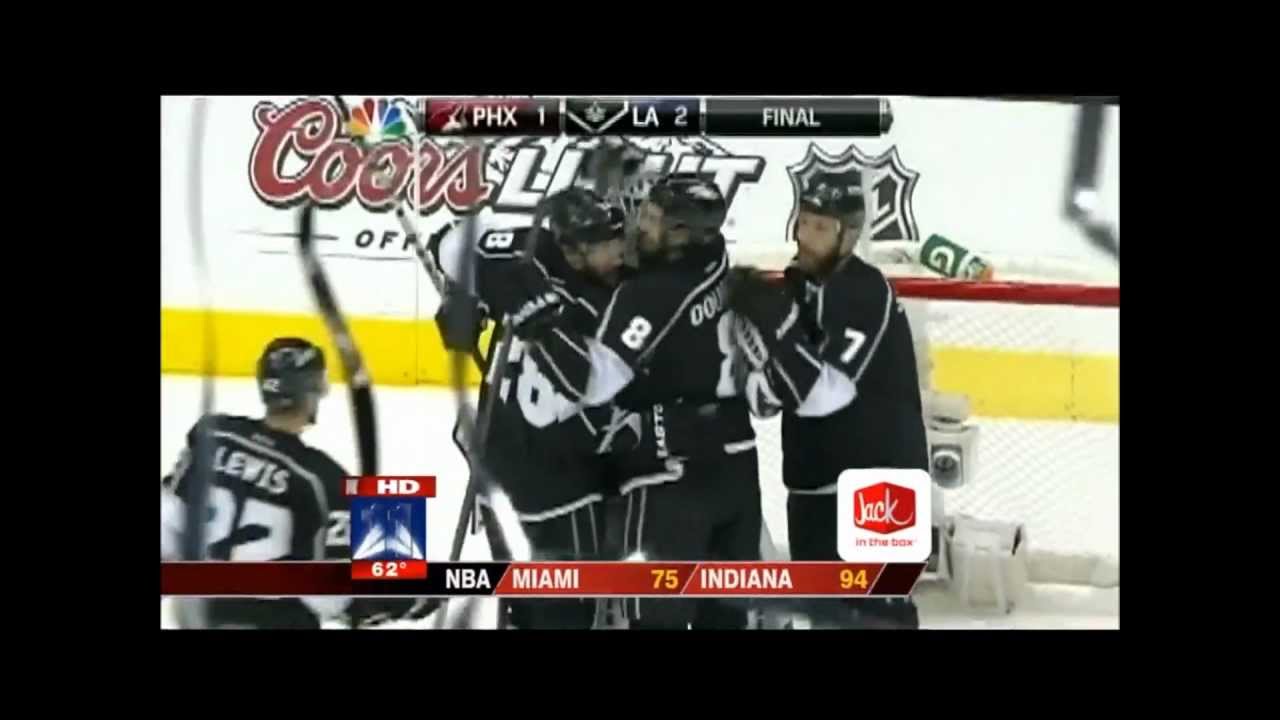 It starts off with “Doesn’t matter who is playing at Staples”, already alluding to how the Kings are perhaps less relevant than their NBA counterparts in the city.  The segment continues with a small pronunciation mistake as Anze Kopitar’s name is mispronounced as Kopidor, but quickly corrected.  Then everything breaks loose: the puck is referred to as a ball, touchdowns are mentioned in an attempt to make light of the error, and Drew Doughty somehow transforms into “Brad Doty” – which was not corrected.  Thanks again to Puck Daddy for bringing this string of errors to light.

With NBC and Fox down, who could be next?  Let’s welcome CBS to the fray.  On May 20th, CBS LA decided to introduce their Kings coverage with a view of fans, a pep rally, and a mascot.  They must have been watching the NBC broadcast from a week earlier when planning out their coverage, because they too decided that the Sacramento Kings would be a good fit to represent the hockey team.

That is not Bailey, of LA Kings mascot fame.  Instead, it is Slamson, the Sacramento Kings mascot.  If he was the mascot pumping up the team, I understand why the Kings looked so flat in Game 4 and lost the game.

After a week of jokes, the Kings decided to have some fun with all of these mistakes and created a wonderful infographic about their team history, and where it may diverge from earlier news broadcasts.

Just two days later, after the team clinched a spot in the Stanley Cup Finals, Steve Lepore at SB Nation pointed out that the Kings aren’t immune to making mistakes themselves.  While Dustin Penner has been a major force for the team through this year’s playoffs, he hasn’t risen to head coach level quite yet.

After three local newscasts and the team website have all made mistakes in covering the NHL’s Kings, is there anyone left?  Of course there is – the NHL and their wonderful shop.  Courtesy of Deadspin, people better hurry up if they want to buy their “Alex Kopitar” shirts before they sell out!  I wonder if he knows Anze Kopidor…

It’s now the end of May.  Both the Clippers and Lakers have been eliminated from the NBA playoffs and the Kings are knocking on the doorstep of earning their first ever Stanley Cup Championship.  It’s about time (read: long overdue) that the city of Los Angeles learns about their hockey team and gives them the credit they deserve before the enjoyable ride is over in two weeks.  In the meantime, I’m going to go fire up NHL ’12 so I can create the unstoppable Alex Kopitar – Anze Kopitar – Anze Kopidor line.  I hope Alex can play left wing…

5 thoughts on “For Love of the LA Kings, It’s Time for LA’s Media Outlets To Wake Up”