Edmonton is on a mission to improve their defence. Looking at last year’s blueline, it won’t be a tall task. [Our Hometown]

Might they be looking at say, a Brian Campbell? [Edmonton Journal]

Who is the front runner for the head coaching gig in Pittsburgh? [Post Gazette]

The latest on the Canucks coaching search. [CKNW]

It looks as thought the David Booth era in Vancouver has come to an end. [Nucks Misconduct] 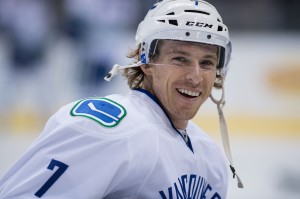 The best UFA’s available in the Metro Division. [Beyond the Benches]

Trouble in the water for San Jose? [Mercury News]

Remembering what was a great season of hockey. [Vavel]

Some thoughts on the Rick Nash saga. [Blueshirt Banter]

And finally, this is what it feels like to be a New York Rangers fan. [Modern Spectator]