As fans patiently wait for the NHL and NHLPA to negotiate a new Collective Bargaining Agreement (CBA), many are reminded of a time just eight years ago when the ’04-’05 NHL season was cancelled due to a lockout. When the NHL resumed play for the ’05-’06 season, many new rules were in place that changed how owners, general managers, and players went about their business. Amongst these rules were:

A comprehensive list can be found at: NHL.com’s CBA FAQ

Now that the CBA, which required a season-long lockout, is about to expire, it is a good time to reflect upon which teams succeeded in the new salary cap era and which teams struggled to adapt to a new NHL.

The following is a list of the Western Conference teams from worst to best in terms of total points accumulated since the lockout and some of their highlights and low-lights.

Highlight: In the first season following the lockout, the Oilers made an improbable run to the Cup Final as the eighth seed out of the West. They took the Hurricanes to seven games in the Final, but lost 3-1 in Carolina.

Low-light: Little did anyone know that after the Oilers skated off the ice in Carolina in 2006, they would not see the playoffs again.

Random Fact: Edmonton has now had three straight first overall picks to show for their futility (much to the dismay of the next team).

Highlight: With Calder Trophy-winning goaltender Steve Mason, the Blue Jackets clinched the only playoff berth in franchise history in 2009.

Low-light: Despite the lack of success on the ice, the true low-light for this team may have just occurred weeks ago, as former first round pick, captain and franchise centerpiece Rick Nash was traded away. Nash is the franchise leader in most scoring categories and his departure signifies an even more unknown era for the Blue Jackets.

Random Fact: Columbus is the only team in the West without a single playoff victory since the lockout.

Highlight: Under the NHL’s General Manager of the Year, Doug Armstrong, and Jack Adams winner for coach of the year, Ken Hitchcock, the Blues found a resurgence in ’11-’12 as they won the Central Division with 109 points.

Low-light: In the first season after the lockout, the Blues ended a 25-year streak of playoff appearances, the third longest streak in NHL history.

Random Fact: The Blues have been swept in both of their elimination series from the playoffs.

Highlight: Winning the first Stanley Cup Championship in franchise history with an unprecedented run as the eighth seed in the West this past season.

Low-light: In the first season following the lockout, the Kings fell from second place in January to 10th place, missing the playoffs. Management proceeded to clean house, firing the head coaching staff, general manager and director of player personnel, while reassigning the vice president of the team. Even the team’s CEO stepped down.

Random Fact: The Kings are the first eighth seed to defeat the top-three seeds in the conference and proceed to win the Stanley Cup.

Highlight: Center Paul Stastny took the NHL by storm in his first season, setting a league record for longest points streak by a rookie (20 games) in ’06-’07.

Low-light: In ’10-’11, the Avs had their worst season since leaving Quebec, setting a franchise record losing streak in the process.

Random Fact: Colorado holds the NHL record for longest consecutive sellout streak at 487 games, which ended in the first season after the lockout.

Highlight: This past season, the Coyotes surged to the top of the Pacific Division at the end of the season and made it to the Conference Final, giving Phoenix a reason to fall in love with hockey.

Low-light: A bankruptcy hearing in 2009 followed by years of trying to find new owners and/or a new home that continues through today.

Random Fact: After the lockout, Brett Hull signed with the Phoenix Coyotes and was given his father’s retired No. 9 that he wore with the Winnipeg Jets. Brett played five games, recording an assist, before retiring within the first month of the season.

Highlight: The Wild appear to have cashed in on their highlight in the waning hours of the current CBA as they signed Zach Parise and Ryan Suter to 13 year, $98 million deals. These contracts provide hope for the future, demonstrate a commitment to spending for the franchise and have brought a buzz to the “state of hockey”.

Low-light: After missing the playoffs every year since 2008, the Wild looked to resurge this past season and led the Western Conference in points in early December. They fell in stunning fashion, though, quickly falling out of the playoff race and finishing 12th in the West.

Random Fact: The Wild rotated their captaincy in their first nine years of existence until finally naming Mikko Koivu the permanent captain in 2009.

Highlight: After signing Marian Hossa in the off-season, the Blackhawks won 52 games in the ’09-’10 season, reached attendance figures over one million people including the playoffs and won their first Stanley Cup since 1961.

Low-light: The first season after the lockout was a disaster for Chicago as they finished with the second worst record in the NHL and fired fan favorite play by play man Pat Foley (who was later hired back).

Random Fact: The Blackhawks have had the first overall pick in the NHL Entry draft only once in franchise history. They used it to select Patrick Kane in 2007.

Kiprusoff has one of the heaviest workloads in the league, but hasn’t seen the playoffs in a while (Jerome Miron-US PRESSWIRE)

Highlight: The Flames started the season after the lockout by raising a Western Conference Champions banner. They also put together a division winning regular season, led by Vezina winner Miikka Kiprusoff in net.

Low-light: Despite finishing with at least 90 points in each of the past 3 seasons, the Flames have not made the playoffs after starting the post-lockout era with 4 straight playoff berths.

Random Fact: The Flames went through three coaches during their four playoff berths (Darryl Sutter, Jim Playfair, Mike Keenan) and only one during their three playoff misses (Brent Sutter).

Highlight: The Ducks won their first Stanley Cup in franchise history in the ’06-’07 season. They were the first California team to win the Cup in the modern era.

Low-light: The past season was the worst for the Ducks in the salary cap era; they finished last in their division for the first time since the lockout. The team underwent a coaching change in November as they essentially fell out of the playoff race before the holiday season.

Random Fact: The ’05-’06 season was the last year the franchise was referred to as the Mighty Ducks of Anaheim, using the logo seen in the Disney movies. They promptly won the Stanley Cup in their first season as the “Anaheim Ducks” with a new logo and color scheme. 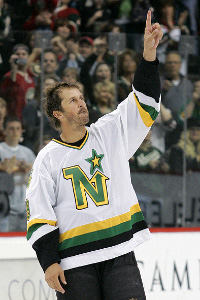 Highlight: The Stars made a huge splash at the trade deadline in ’07-’08 to get Brad Richards. This propelled them to the Conference Final, where they lost to the eventual Cup champions.

Low-light: In 2011, the Stars filed for bankruptcy after being managed by the NHL and were sold at auction to the only person who submitted a bid, Tom Gaglardi.

Random Fact: The Stars’ current streak of four straight seasons without a playoff berth is the longest in franchise history.

Highlight: After losing in the Conference Quarterfinals four out of the previous five years, the Predators finally advanced to the Conference Semifinals for the first time in franchise history in ’10-’11 after beating the Ducks.

Low-light: In 2007, rumors swirled that the Predators were going to be sold to a few different buyers who wanted to move the team. A local group finally put together a deal to buy the team, though a minority owner eventually declared bankruptcy just a year later.

Random Fact: Nashville is the only team in the West to record a 100-point season after the lockout and still have no division championships. In the ’06-’07 season, they finished with 110 points, third in the NHL, but still behind division-leading Detroit which had 113 points. 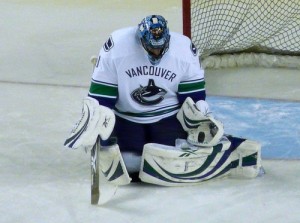 Low-light: The 2008 off-season was a somber one for the franchise coming off a disappointing season. After undergoing numerous personnel changes and letting go of longtime captain Markus Naslund, the team lost defensive prospect Luc Bourdon in a fatal motorcycle accident.

Random Fact: From 2008 to 2010, Luongo was the captain of the Canucks despite NHL rules that do not allow goalies to act as on-ice captains. Luongo wore the “C” on his mask and Vancouver appointed three alternate captains to deal with officials.

Highlight: In ’05-’06, the Sharks got off to a dismal start and made a blockbuster trade to acquire Joe Thornton from Boston. Thornton proceeded to win the Art Ross Trophy and Hart Memorial Trophy, while Jonathan Cheechoo won the Maurice ‘Rocket’ Richard Trophy as the Sharks moved from last in the division to second.

Low-light: In ’08-’09, the Sharks won the Presidents’ Trophy and set franchise records for wins and points, but were promptly upset in the first round by the eighth seed Ducks.

Random Fact: As shown above, the Sharks have found a way to make the playoffs every year post-lockout, but have not made it out of the conference, and have lost to seven different teams in those seven years. The streak even stretches pre-lockout as the Sharks lost to the Flames in ’03-’04.

Highlight: The Red Wings won their fourth Stanley Cup in 11 years after defeating Pittsburgh in the 2008 playoffs. Nicklas Lidstrom became the first European to ever captain his team to a Stanley Cup victory.

Low-light: After setting an NHL record for most consecutive home victories at 23 during the season, the Wings began the ’11-’12 playoffs on the road and were quickly knocked out in the first round by Nashville in just five games.

Random Fact: The Red Wings played in the first NHL game to ever be postponed due to an injury when defenseman Jiri Fischer suffered a heart arrhythmia and collapsed on the bench in 2005. Fischer recovered and went on to retire. The game was made up in early 2006.

There you have it for the Western Conference in the post-lockout era. Do you see any unexpected surprises in retrospect?

Stay tuned for the Eastern Conference next week.