The 2010 NHL Draft will forever be remembered for “Taylor vs. Tyler,” the debate between Windsor’s Taylor Hall and Plymouth’s Tyler Seguin for the top overall selection. That June, scouts and analysts vigorously deliberated the ultimate upside of the two dynamic young forwards.

Seguin’s sophomore efforts silenced the doubters – and then some.

Finishing just shy of thirty goals and seventy points – in fewer minutes per-game than any of his scoring-equals – Seguin led the League’s second-best offense despite turning twenty halfway through the year.So impressive was his production that he earned his first career All-Star nod.

But how high will his star rise?

Prior to and immediately following his selection with the second overall pick in 2010, there were some lofty projections bandied about regarding the Brampton, Ontario native:

“Will be a superstar and best player in draft in five years.… First-line centre and future superstar”- Central Scouting’s Mark Seidel

“If you asked me who had the highest ceiling in this Draft class, my answer wouldn’t be Taylor Hall but rather the young Seguin… an elite playmaker” – Hockey Prospectus’ Corey Pronman

After leading the OHL in scoring during the 2009-10 season with 106 points, many expected the youngster to step right into the Bruins’ lineup and contribute.

Yet, his eighteen year-old 2010-11 season with the Bruins caused some to back down from similar forecasts until his coming-out party in May: A four-point period against Tampa in game-two of the Eastern Conference Finals.

But it was his age-nineteen season that truly evinced this young forward’s potential. Finishing a remarkable tenth in the League in even-strength per-minute point-production (2.69 P/60m),Tyler Seguin emerged as one of the best forwards in the game. In 2011-12 he became just the first player in five seasons (Thomas Vanek in 2006-07) to finish among the top-thirty scorers in the League while averaging less than seventeen minutes a night.

How brightly will his star shine? Looking at historically similar players gives us some hints:

Like Gaborik, Lecavalier and Nash; Tyler Seguin jumped to the NHL following his draft-year and saw his production boom in a season he started as a teenager. The same cannot be said for either Handzus or Comrie.

Most players who managed second-year breakouts saw their production fade modestly in the following season (one notable exception is Nash). Examining ten players with similar career-starts (in recent seasons) resulted in the following: 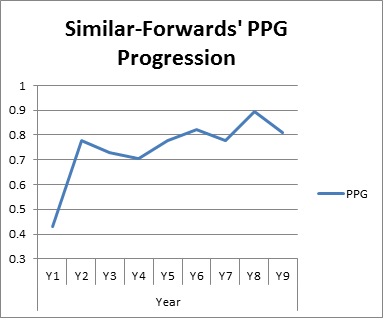 While somewhat dampening Seguin’s 2012-13 outlook, it reaffirms his long-term upside as a point-per game player – and implies he should be able to maintain a high level of production over the next half-decade.

Between the 1995 and 2006 NHL Drafts, forty players who spent their draft-seasons in the CHL were selected in the first round – and later hit fifty or more points in a single season (just like Seguin). There’s some modest positive correlation between draft-year production in the CHL and both career and peak scoring in the NHL: 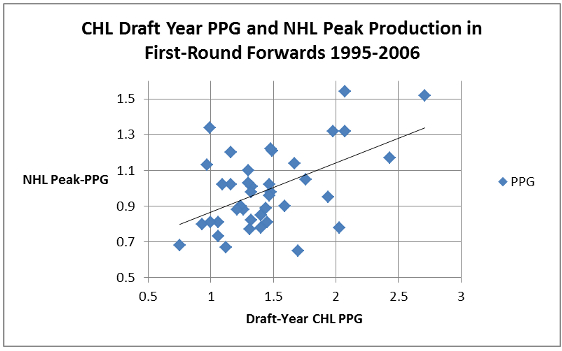 There’s a modest correlation present here. The trend projects a peak NHL point-per-game rate of 1.05 for Tyler Seguin – the equivalent of 87 points in an 82-game season. 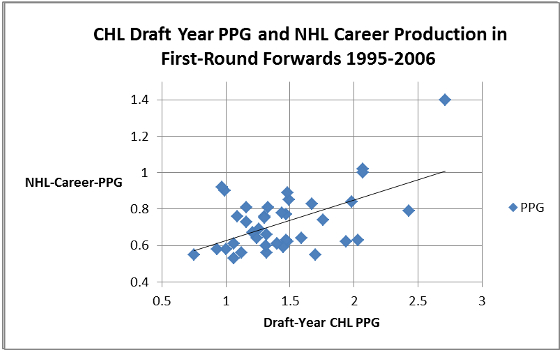 Utilizing the trend in the second graph, we come up with an expected career point-per-game rate of 0.78 for Seguin (64 points over an eighty-two game season) – again, it’s a relatively weak correlation. While some might find the 0.78 points underwhelming, it puts him in the range of elite scorers like Simon Gagne, Corey Perry and Patrick Marleau.

“I think that he can be a legitimate number-one center,” said Ladd. “He’s got elite playmaking ability and speed … [when you re-watch his tallies] so many of them show him using his speed through the middle… it looks like you can’t stop him…”

Ladd hopes the Bruins move him back to his natural position at center in the near future, but thinks that forty goals and the century-mark in points may be in the cards for the young forward:

“I think he can hit forty goals at some point – I don’t believe he has the shot that Stamkos has [Bill doesn’t see the same consistently lethal one-timer] … it’s daunting… his max potential is somewhere in the 90 to 100 range.”

Ladd believes that much of Seguin’s future improvement depends on “getting a stronger base and working on his leg-strength.”  The forward has dynamic two-way potential: “He can be a real force causing pressure on the backcheck,” even though “… the jury’s still out on his ability to win battles when he has to.”

Hundred-point upside? Lofty praise, no doubt, but hardly inconceivable. Since the lockout, twenty-two players have thirty-seven times scored at an equivalent pace (minimum 60 games) – twenty of whom remain active. Undoubtedly, a dozen or more have the ‘upside’ to achieve that down the road – and among their ranks is Seguin.

Players rarely ‘peak’ in their teens (for forwards, ‘peak’ offensive production usually occurs around the age of 25) How much of the hill still lies ahead of Seguin is debatable, but signs point to increased production.

From a shot-creation standpoint, Seguin’s 2011-12 season bordered on the obscene. Among NHL forwards with a thousand or more even-strength minutes, only linemate Patrice Bergeron had greater success producing and negating shot-attempts.

Despite leading the Bruins in goals with 29, Tyler Seguin shot at a modest 12.0%. Only eight players with more goals shot worse. The ‘average’ NHL forward shot at 10.5%. The young forward’s minutes will almost certainly increase from the 16:56 he saw in 2011-12. Even a modest boost to his ice-time could find his numbers skyrocketing.

As the above surely illustrates, Seguin’s sniping capabilities at least neighbor the ‘elite’. While expecting forty goals would be ludicrous at this point – if he logged 16.5% with equivalent shot-production (well within the realm of possibility), forty could be in the cards.

Seguin’s prowess in finding the back of the net has drawn some attention away from his plus-plus distribution-game. He reads plays exceedingly well both off the rush and setting-up in-zone and can find teammates with a dazzling array of passes.

Few players combine Seguin’s elite skating-game and brilliant puck-skills at such a young age. For much of the 2011-12 season, the youngster flirted with point-per-game pace – and analysis of his talents, performance and comparisons with historically similar players imply that 80-90 points should be well within reach.

For all but the true cream of the NHL crop, the century-mark in points requires a perfect storm of fortune and talent. While Tyler Seguin hasn’t proven he belongs alongside the like of Malkin and Crosby – he took great strides in 2011-12 and placed himself in the discussion for elite scoring consideration down the road.