After just his first season of a four-year, $22 million deal, the Arizona Coyotes are finished with Mike Ribeiro. And while the details of Ribeiro’s reversal of fortunes are a bit obscure, what we do know is that Coyotes GM Don Maloney would rather pay a $1.944 yearly cap hit for the next six seasons than keep the offensive center on his roster. With a track record to go along with his latest circumstances, Ribeiro’s future in the league is now a window inching closer to closing.

Ribeiro’s recent buyout is the latest account in what could be written as a tragic novel. The behavioral issues surrounding the 34-year-old forward date back to his tenure with the Dallas Stars. In 2010, Ribeiro was arrested for public intoxication after an altercation in a restaurant while out with his wife and a pair of friends.

According to reports, a friend of Ribeiro’s engaged police in a quarrel once the party was kicked out of the establishment. The group was arrested, but posted bail shortly after being detained. In a statement released after the incident, Ribeiro downplayed the episode, saying, “it wasn’t a big thing.”

“It wasn’t a big thing,” said Ribeiro. “I wish there were cameras there and they could have seen what happened. … I just want to put that behind us today.”

Ribeiro, who was entering his fifth season with the Stars would go on to score 19 goals, while adding 52 assists that year. It would be his third highest point output of his career, standing to this day. But even though the 6-foot, 177-pounder was producing on the ice, he was far from escaping his past and future.

Drafted in the second round of the 1998 NHL Entry Draft by the Montreal Canadiens, Ribeiro was anything but happy in Montreal. Despite racking up 153 points in 276 regular season games with the Habs, he was commonly viewed as the black sheep.

A few years after Montreal traded the disgruntled center to Dallas, Ribeiro taunted the Bell Centre crowd in his first game back in Montreal.

After being named the game’s first star, the Montreal native skated out, while waiving his arms up and down before mockingly saluting the crowd and taking a bow. Ribeiro’s antics resembled a WWE heel rather than a player who was amped over a big win.

“Mike Ribeiro enjoys an interesting reputation around the NHL, sparked mainly because of some incredibly immature actions during his time with the Montreal Canadiens. While it’s been five seasons and nearly six years since he was traded to the Dallas Stars, Ribeiro’s reputation as a cocky, frustrating player has stuck with him.” — Brandon Worley, SB Nation

If Ribeiro’s post-game antics weren’t enough to convince you he’s talented at holding grudges, his comments later that night irrefutably ends any doubt.

“I’m sure they know they made a mistake,” answered Ribeiro when questioned about the results of the trade that sent him to Dallas. “But who would have said that I’d play this way? My first game back in six years. People have probably forgotten.” 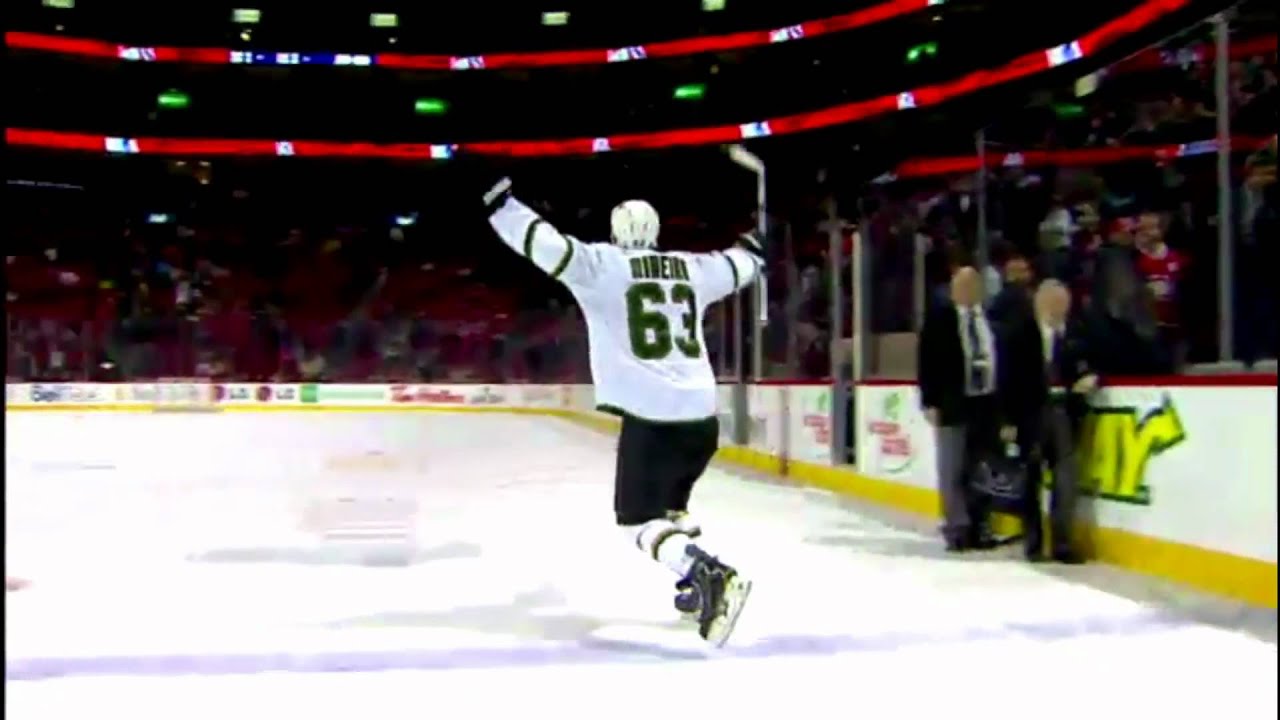 After notching 63 points in the 2011-12 season, the Stars traded Ribeiro to the Washington Capitals for a second-round draft pick and Cody Eakin. Despite Ribeiro’s offensive production, the move was triggered by multiple factors. The Stars would’ve been responsible for Ribeiro’s $5 million cap hit to go along with his defensive and faceoff struggles.

“I prefer to make a trade than sign free agents,” said former Caps GM, George McPhee. “That other process is expensive and usually more term than you want. Sometimes you get it done and by the end of November you are asking yourself, ‘What did I do here?’ You win the battle for a player and you’re trying to trade him two months later.”

Coincidentally, Ribeiro’s term in Washington lasted as long as the contract he carried to town with. After 48 games of the lock-out shortened season, McPhee’s trade prize was sent to the free agency pool; a destination that didn’t sit well with Ribeiro’s wife, Tamara.

“The Washington Capitals are reportedly letting Mike Ribeiro hit the free agent waters, and his wife was not pleased with this development.

“Going by the name Tamara W Ribeiro and Twitter handle @Angeltw3, Ribeiro’s wife took to the social media website to voice her displeasure by the fact her husband will become an unrestricted free agent on July 5.” — Cam Tucker, Pro Hockey Talk

The social media action mentioned above was provided via Twitter, but was removed from the page shortly after it was posted.

The tweet read, “Nothing like being uprooted from your home for a year for absolutely no apparent reason.”

The sound off was stamped with the hashtag: #PissedBeyondBelief.

The reaction may be a touch over the top considering the decision not to re-sign the aging forward was allegedly a financial determination. The Caps simply didn’t want to take an annual bloated cap hit for a center who was approaching his mid-30’s. After all, Ribeiro did turn down an offer from Washington that would’ve paid Ribeiro $14 million over three seasons.

#Caps Mike Ribeiro has turned down a 3 year, $14M offer from the team, and doesn't appear to be any closer to reaching a deal.

Whether they knew of how things would play out in Arizona or not, the Caps clearly made the right call.

Just The Tip Of The Iceberg?

In his last two seasons, Mike Ribeiro exhibited the type of endurance found in players a decade younger than him. The veteran journeyman dressed in all 48 games two seasons ago for Washington, and all but two in his first and final season in Glendale. But a three-year decline in scoring, as well as certain character issues, have left Ribeiro looking for a job.

When the news of Ribeiro’s buyout hit, Fox Sports Arizona’s Craig Morgan dropped an anvil on fans, exposing some of the causes of Maloney’s decision.

“His past track record with coach Dave Tippett in Dallas made the management and coaching staffs believe they could handle whatever issues arose, but a source told FOX Sports Arizona that Ribeiro was late for practices, missed meetings, missed buses and even engaged in a shouting match with Tippett in the locker room after a game in Colorado.

“Ribeiro had some marital issues as well and he never seemed to click with any of his linemates, managing just 16 goals and 47 points in 80 games. With his team chasing a playoff spot late in the season, Tippett benched Ribeiro for games at Pittsburgh and New Jersey.” — Craig Morgan, Fox Sports Arizona

Will anyone sign Mike Ribeiro this summer? The Coyotes buying him out is pretty telling but is he an okay risk on a one-year deal?

Perhaps Ribeiro was feeling too comfortable with Tippett, who won his 400th career game as an NHL coach this past season. Whatever it was that was going on in Ribeiro’s head, his actions suggest that he had an attitude of entitlement. And while it’s not out of the ordinary that certain players just don’t mesh with others, Ribeiro’s reputation that followed him to Arizona proved hard to shake.

Others close to the situation have claimed that this is “just the tip of the iceberg” in regard to Ribeiro’s off-ice actions. But since his marriage was initially brought up in the Fox Sports Arizona piece, it’s best to not assume anything. After all, everyone makes mistakes in life, and to magnify any rumors or hearsay is not only irresponsible, it’s morally wrong.

Is The NHL Really Finished With Mike Ribeiro?

The combination of Ribeiro’s age and reputation certainly decrease the odds of the former Coyote skating again in the league. But at such an early stage throughout the offseason calendar, there are a handful of teams that could use Ribeiro’s services. For that to happen, however, Ribeiro will more than likely take a significant pay cut and join whichever organization that gambles on him with a shorter leash.

One team in particular, who recently found themselves in need of a center, are the Nashville Predators. The Preds will be without Mike Fisher for an extended period of time due to an achilles injury suffered last week.

“I hope we have enough depth,” said Nashville GM, David Poile. “We will give certain guys a chance to be successful and give Mike a chance to get back.”

Poile’s response to Fisher’s injury isn’t a guarantee that he won’t sign or trade for a veteran center. Not only did Poile previously attempt to acquire Jason Spezza, the Preds have been linked to trade rumors involving Flyers center Vincent Lecavalier. Ribeiro’s offensive game, though, could be exactly what new coach, Peter Laviolette, is looking for.

“Ok. So let’s assume he’s a good hockey player. Why is this a good idea? What if he flames out with the personal stuff here, too?
“I’m willing to gamble that won’t happen. Here’s the situation…Ribeiro probably isn’t getting more than a one year deal at this point. He’s going to make almost $2 million a season to NOT play for Arizona, so he can “afford” to take a low-ball offer (which is all he’s gonna get) and prove himself for a deal next year. If it works out, great. If not, all it cost was a roster spot and some nominal amount of money that isn’t yours. Contrast this with any proposed Vincent Lecavalier trade. Vinny is also 34, but is under contract until 2018 with a cap hit of $4.5 million! Not good. Not to mention whatever is given back to Philly in the exchange. I’m not a fan of that option.” — Jason Zito, On The Forecheck

While Ribeiro would certainly come at a discounted price in comparison to Lecavalier, or even Steve Ott, there are other options that would come just as cheap, should Ribeiro’s past scare Poile away. Michal Handzus, Scott Gomez and Adam Hall are all available, and likely for a discounted rate. Certainly, these options do not possess the scoring ability of Ribeiro. But they also lack the risk that comes with him as well. And that risk alone could result in the end of his NHL career.

1 thought on “Is The NHL Finished With Mike Ribeiro?”