No one can really fault Islander fans for feverishly refreshing the NHL Standings webpage over and over, even if we are only two weeks into this young season.   Usually, a fan wouldn’t really start considering what playoff spot, or over the last five seasons for the Isles, how many points back are they until the half way point. But the shorten season has given us all the freedom to act a little crazy.

Without question, the first big test for the Isles would be there five game road trip that started with their third game of the season.   Considering teams had such a short training camp, a week span on the road maybe just what the team chemistry doctor ordered.  It’s a chance for the team to size themselves up against so formidable opponents as well as test their reactions to their first  back-to-back which will be a big part of the shorten season.

Looking at the five games against Toronto, Boston, Winnipeg, Pittsburgh and New Jersey, I felt earning 7 points out of 10 would make this a super successful trip.  It would also show us how this Islanders team had vastly improved from last year’s squad where I would have predicted only 3 or 4 points against these teams.

Time to review what we learned about this team over the last five games.  I suggest throwing on some music by Coheed and Cambria as you read. Their songs lend to the following inter-titles.

“Running Free” Thanks to Fortitude and Then Explosions in Toronto

A huge 7-3 win capped a big comeback for the Islanders who were down 3-1 at the end of the first period.   Dividends were paid on the acquisitions of Keith Aucoin and Brad Boyes who each scored their first goals as Islanders.   Michael Grabner continued to show flashes of rookie season output with two goals.   The most important aspect of the game was how the Islanders fought back and took control and eventually dominated.  They didn’t let a tough first period break them, and they were able to pounce on a Maple Leafs squad that was tired from playing the night prior.  This was a character win.

Check out Keith Aucoin’s huge clutch stick save late in the game to keep the Isles securely on top.

“Everything Evil” in Exhausted Boston Loss

The Islanders became victims of the exhaustion from back-to-back games the following night against the Bruins.  The Islanders lost 4-2.   There were positives to take from the contest.   The Islanders hung with the strong Bruins for two periods and entered the third tied at two.   Rick Dipietro made his first start of the season between the pipes, and was functional.  He didn’t get injured, which many fans jested would happen, and he didn’t cost them the game with rusty play.  Though, one would still have to question some of the choices he made in attempting to play the puck.  His career seems marred by his stick handling confidence, as too often he puts himself into trouble when he goes out of his crease to toy with the puck.   Aucoin netted his second and third goals of the season, again showing GM Garth Snow’s shrewd ability to snag a gem off the waiver wire.  The Islanders seemed to be out of gas in the third period, where the fresher legged Bruins pushed their way into a lead and eventual win.   Still, this was a team that overran the Islanders a few times last season.  It’s a game where the Islanders worked hard and showed they can skate with a top team, they just need to learn how to better prepare for the third period of the   second half of a back-to-back game. 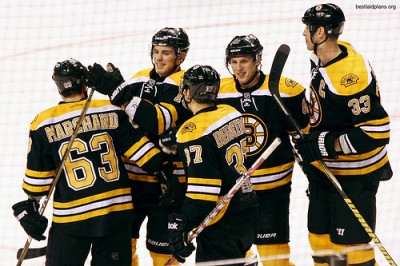 Granted the Islanders lost in overtime 5-4.   Yes, they get a point in the standings.  And yes, the biggest problem in this game was a sloppy start, but the silver lining of this one was the early stellar goaltending by Evegeni Nabokov.  He was brilliant in the first period, and kept the Islanders from falling out of the game.  He gave them the chance to get points and sparked their eventual two-goal lead.   Ultimately, the Isles were unable to hold onto their early third period lead and the Jets forced overtime.  Losing in overtime left a bad taste in the mouth, especially with former Islander Al Montoya earning the win in net,  but  it can’t be overlooked that they survived an uneven effort enough to salvage a point in the standings.  Also of note, defenseman Thomas Hickey made his NHL debut.  A former 2007 4th overall pick was snagged off waivers from the L.A. Kings.  Isles hope he will be another waiver rookie steal in the tradition of Michael Grabner, who was taken off waivers from Florida at the beginning of the 2010-2011 season and has shined since.

“A Favor House Atlantic” Division Statement Made in Pittsburgh

No one was expecting the Islanders to be the team to put on a clinic, but on this Tuesday night in Pittsburgh, it was Tavares and Moulson who were led the show, not the expected duo of Crosby and Malkin.  Isles dominated this one and won 4-1.     Pittsburgh learned this isn’t a team they could sleepwalk past.  The Islanders played a perfect road game and took full advantage of a spiritless Penguins squad.   The Isles offense continued to be balanced and explosive as they saw hard-working youngster Casey Cizikas score his first National Hockey League career goal and chased Marc-Andre Fleury from the net.  The Islanders need to study their effort in this game as an example of what they can do on the road against any team.

The Islanders finally ended the big five game trip in New Jersey.  They lost to the Devils at home on the opening night of the season 2-1.  Since then, they played 5 games and scored 21 goals.  The question now was, would they be able to continue putting up the big goal numbers?  Would John Tavares finally break through his scoring struggles against Brodeur and the stingy Devils’ defense?  Yes and Yes.  An exciting back and forth game included two goals by John Tavares.  The game was a wild one, where even the normally low scoring Devils found ways to put the puck in the net.  But again, the Islanders never quit, even with plenty of adversity.  The Devils kept coming back every time the Isles took another lead.  Coach Jack Capuano was hit with a puck late in the third period and had to leave the game.  This led to  one of the sloppiest line changes ever committed with a minute and half left in regulation and the score tied at 4-4. The Islanders somehow had nine players on the ice!  But they kept showing the determination that is going to get them a lot of attention from opponents from here on out this season.  The Islanders killed the penalty again, and fresh off inking his contract extension, Brian Stait drew a penalty.  On the power play  Brad Boyes put the Islanders ahead for the final time of the game.  The game winner.   Islanders had won 5-4.

It was a pivatol early road trip and the Islanders ended up taking 7 out of 10 possible points.  They have scored 27 goals in seven games and are so far and are proving to be an exciting team to watch.  After defeating division rivals two games in a row, other teams will have to start figuring out ways to tie up this newly well-balanced offensive team.

And again, I realize it’s too early to be obsessed with the standings, but as of right now, 2 weeks in, on the final night of January, the Islanders are tied for first place in the Atlantic Division.  There’s plenty of hockey to be played.  At least for the time being, Islander fans can continue to be very excited.