Early this week, Barclays Center announced its plans to raise season ticket prices in certain obstructed view sections for the Islanders’ 2016-17 season. Fans subject to the price hike could either bite the bullet and renew, or opt out of their seats by the middle of March. It was a sucker punch of sour news for those affected, coming on the heels of an email the month prior ensuring all renewing season ticket holders of a zero percent price increase for next season.

Incensed, the fans called the Barclays Center on its duplicity and demanded the arena honor its original policy. The outrage forced BC executives to rethink their decision, and on Wednesday they announced that there would be no markup, after all. It was the proper resolution (to a foolish controversy), and the continuation of a season-long trend: when the fans have spoken, Barclays Center has listened.

With the arrival of the Islanders to Barclays Center in September came the arrival of hockey. At the time, both the team and the sport were foreign entities to the arena’s CEO, Brett Yormark, and his administrative team. Learning on the fly how to stage BC’s newest attraction, they’ve refined their product through trial-and-error – mostly error, if we’re being honest – and honest consideration of fan feedback. 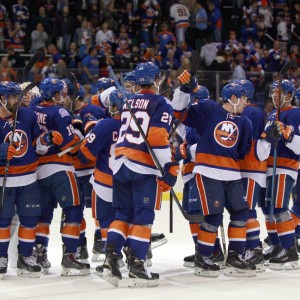 It’s the right approach for a group short on experience. Hockey carries an arcane culture and the Islanders boast a rich history, and the team’s longtime fans are the only ones fluent in both. They’re an indispensable resource for Yormark and his team, a sounding board for their various ideas, and BC executives have engaged the fans to positive effect.

It hasn’t exactly been pleasant collaboration. The two sides have butted heads more than they’ve worked together, and agreement has mostly come on the heels of protest. Barclays Center hasn’t so much solicited the fans’ opinion as they’ve been confronted by it, yielding to cries of objection after misguided changes. Indeed, it seems Yormark’s most popular decisions have simply served to undo previous mistakes.

When Barclays Center introduced a new MTA-inspired goal horn during preseason, the fans quickly petitioned to bring the old one back. When fans were told they needed a special ticket to watch warm-ups from the glass – a Nassau Coliseum routine – they clamored for more access. And when the team’s longtime mascot, Sparky the Dragon, was dismissed from duty, the fans rallied for his return.

By the Islanders’ home opener, that bellowing horn from Nassau Coliseum was back in service. Sparky made his return shortly thereafter, grinning his toothy smile as if he had never left. And though it took time, and a stiff refusal to compromise, the fans eventually recovered the right to watch warm-ups from wherever they so please. Good for them.

Through it all, Yormark has downplayed the fans’ influence on his decisions. Though he is generally willing to appease their demands, he is loath to admit he has cracked under their pressure, clinging, perhaps, to a sense of public pride. After bringing back the Coliseum goal horn, Yormark was quick to point out, “I’m not acquiescing to the Islanders’ fans. I’m doing the right thing.”

It was a petty distinction, and a disingenuous one at that. (If the fans hadn’t reacted so harshly to the change, of course, Yormark never would have gone back.) But it underlines the reluctant nature of his engagement with the fans, Yormark averse to his own need. He wants to be seen as an independent leader, but the fact remains he’s taking his cues from the people beneath him.

In this light, the defiance of Islanders fans represents a victory for sports fan everywhere. Even as team owners and executives claim to serve the fans that support them, it’s understood that they act with their own interests in mind. There’s nothing necessarily nefarious about it, but fans tend to feel marginalized nonetheless, ever under the thumb of the slick-suited authorities above them.

What began as a struggle for a better game-day experience has morphed into something much larger. In pushing back against Yormark and Co., Isles fans, wittingly or not, are crusading for the cause of the underdog. And with each victorious campaign, from the return of Sparky to the repeal of increased ticket costs, they narrow that gap between themselves and their perceived superiors.

Still, that’s more of a neat byproduct than an intended result. For Isles fans, this is about preserving their traditions through the team’s transition to Brooklyn. They knew changes were on the horizon entering this season, and they knew some things were beyond their control, but they haven’t been resigned to every policy and promotion thrust in their face.

Remember, this fanbase never wanted to leave Nassau Coliseum. The arena, for all its flaws, was truly a home for the Islanders, the dwelling of the team’s soul. There was a different vibe there, a family vibe, and the fans are doing their best to reproduce that in Barclays Center. Sparky, the goal horn, unlimited pregame access – it’s all part of it.

That’s where Yormark deserves some credit. His ideas for broadening the team’s fanbase have mostly flopped, but he hasn’t been too proud to abandon them. And though he surely wants to put his stamp on this team – the Islanders are tenants in his building, after all – he has ultimately been willing to leave things the way they were.

The fans, meanwhile, continue to make themselves heard. Though they lost the war in keeping the Isles in Nassau Coliseum, they’ve won battle after battle in bringing the Coliseum with them.