The last time Andrew Ladd suited up for the Blackhawks they won the Stanley Cup at the end of the 2009-10 season. Since then, the imposing power-forward and team leader has gone on to record four 20-goal seasons and score more than 300 points as a member of the Thrashers/Jets franchise.

Now, after nearly six seasons, it is time to bring Ladd back to Chicago. His Winnipeg Jets currently sit well outside the ultra-competitive Western Conference playoff picture, and GM Kevin Cheveldayoff probably won’t have the cap space to re-sign his captain at the end of the season.

This leaves the team with only a few options. The most likely of which would be to deal Ladd to a contending team before the trade deadline in order to prevent him from signing elsewhere this summer and leave the Jets without compensation. And as everyone knows, the Blackhawks are once again among the short list of teams truly contending for the Stanley Cup at this point in the season. With all of this in mind, Stan Bowman can’t afford to be patient in his pursuit of Ladd at the deadline.

After Brandon Saad was traded for salary cap reasons this offseason, the Blackhawks have been forced to use a combination of Richard Panik, Teuvo Teravainen, and Andrew Shaw on their top unit. Shaw is on pace for a career-high in points and has tallied six of them in his past five games, but his grinding style is more ideally suited for the team’s third line long-term.

Additionally, even though Marian Hossa is expected to re-enter the lineup sometime this week, his production has been down significantly this season, and having another offensive catalyst next to Jonathan Toews could prove beneficial for the entire line.

Assuming the team doesn’t trade Shaw or Panik in a deal for Ladd as well, those two players could shift back to their natural roles in the bottom-six. Simply put, the entire lineup becomes significantly stronger if Joel Quenneville is able to role a third line that features some combination of Panik, Shaw, Teravainen, Phillip Danault, and Jiri Sekac. Each of these players brings enough skill and grit to give other teams problems if they try matching third lines.

Time to Cash in

It’s no secret that the Blackhawks’ window to cement themselves as a dynasty is closing more and more each season. Winning three cups in six seasons is definitely impressive, but more might still be needed to ensure that this player and management core secures a spot amongst the legends of the game. But with Hossa and key defensemen Brent Seabrook and Duncan Keith already into their 30’s, management has to question how many more years the Hawks will spend as perennial contenders.

The core is still intact for now though, and the team’s priority should be winning another championship this season, rather than worrying about future assets. Because of this, even their first round pick in the 2016 draft should be in play in trade talks. I recently wrote about other assets the Hawks could part with before the trade deadline, and I am still convinced that Mark McNeill finds a new team before the 29th. He certainly remains a candidate to be traded in a potential move for Ladd, while Tanner Kero, Vince Hinostroza, and Sekac are other names that could generate interest in discussions for a veteran wing. 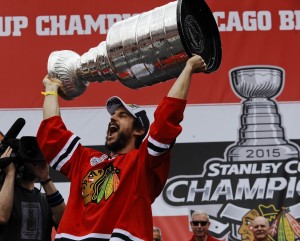 The bottom line is the team has enough quality prospects and rising NHLers to move some of their buried draft picks and young players in order to win now. Bowman made a similar trade last season when he dealt for Antoine Vermette from Arizona, so it will be interesting to see if he pulls off another big move in the next few days.

I suggested that Bowman make a move for Ladd because of the recent rumors that Chicago was interested in the veteran, and because he seems like a perfect fit next to Hossa and Toews. However, I also believe that Eric Staal (another big left-handed shot) and Loui Eriksson are both quality options that fit the Blackhawks’ needs and could cost around the same as Ladd to acquire.

I personally would love to see Ladd return to Chicago for a Stanley Cup run, but the team will need to make a move regardless of which high-profile winger they are able to acquire this week.