Normally when the Stanley Cup Final is in full swing the hockey world is focused on the outcomes of games and news surrounding the two clubs involved. Instead, we decided to look at two specific players involved in the seven-game series – two players that were traded for each other nearly three years ago.

It was the summer of 2014 – June 27 to be exact – when the Nashville Predators and Pittsburgh Penguins finalized a deal that three years later would still be playing out in the Stanley Cup Final.

The trade saw the Predators acquire James Neal with Patric Hornqvist and Nick Spaling heading the other way. Fast-forward to three years later and with two of those players still on their respective rosters, it would see that the trade was pretty even.

But before we go making any decision on how this trade actually played out, let’s break down the details a little further.

Patric Hornqvist: Started From the Bottom

In 2005, the Predators took Hornqvist with the last pick in the NHL Draft. He was selected in the seventh round and 230th overall by the club. He spent his first six seasons with the Preds before they shipped him to Pittsburgh in June 2014. 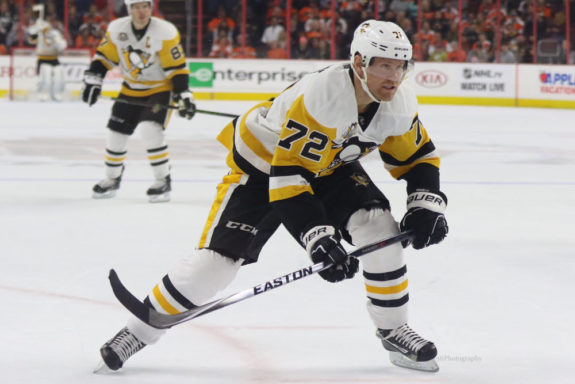 Hornqvist has played a gritty role for the Penguins since the 2014 trade. (Amy Irvin / The Hockey Writers)

In six seasons with Nashville, he scored 106 goals and 216 points in 363 regular season games. While he was often talked about as a smaller power forward, Hornqvist helped the Preds to three seasons of playoff hockey in his stint with the club. He collected eight points in 24 games over that span, but never made it past the second round.

Like Hornqvist, Neal was drafted in the 2005 NHL Draft. He was a second-round selection by the Dallas Stars who took the forward with the 33rd overall pick. From there he played two and a half seasons with the Stars before he was shipped to Pittsburgh during the 2010-11 season.

He spent the next three and a half seasons with the Penguins scoring 89 goals and 184 points in just 199 regular season games. He added 22 points in 38 playoff games for the Pens over four playoff seasons.

While both Neal and Hornqvist were the cornerstone pieces to this deal, with both still playing for their respective clubs, Spaling might be the most interesting when it comes to what he added to the Penguins following his single season stint with the club. But we’ll get to that in just a minute.

Following the trade in June 2014, both cornerstone pieces in this trade had impacts on their new franchises.

In three seasons so far with the Penguins, Hornqvist has tallied 146 points in 216 regular season games. His totals over three years has him averaging more goals, assists and points per game with the Penguins than he did in Nashville.

On top of that, he’s collected 23 points in 46 playoff games since joining the Penguins. But, more importantly, he played a role with a club that has more than enough firepower up front. Call it an agitator or just a pesky power forward, whatever his role, it helped the Penguins capture the Stanley Cup in 2015-16 and has them back in the final in 2016-17. 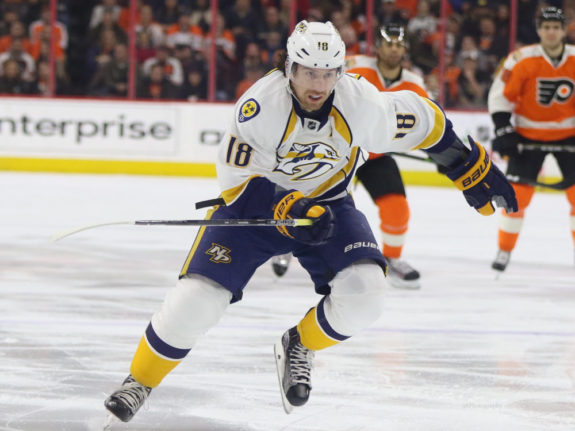 James Neal has lived up to expectations in Nashville. (Amy Irvin / The Hockey Writers)

On the other side of it, Neal has 136 points in 219 regular season games with the Preds. While his per-game averages were better with the Penguins, it shouldn’t take away from what he’s done in Nashville as he, too, joined a team with a plethora of options on the offensive side of the puck.

Since the trade, Neal and the Predators have also seen three years of playoff action. While they weren’t nearly as successful (by having not won a Cup), they have seen success by their own standards – reaching the Stanley Cup Final for the first time in franchise history.

But let’s not forget about the third piece to this deal. Spaling played one season – a full 82 games – with the Penguins following the trade. He scored nine goals and 27 points and added two points in five playoff games with the club.

Following that season, the Penguins shipped him out along with Scott Harrington, Kasperi Kapanen and two picks to the Toronto Maple Leafs in a deal that saw Phil Kessel come the other way.

The trade was a major salary dump for the Leafs who would later begin their rebuild, but for the Penguins it landed them a major offensive asset in Kessel.

Erixon hasn’t played a game for the Penguins since coming over – spending the last two seasons with their AHL affiliate Wilkes-Barre/Scranton Penguins notching 37 points in 119 regular season games.

Biggs has jumped around since the trade. He played 11 games for the AHL Penguins in 2015-16 as well as two games with the Wheeling Nailers of the ECHL. While this season he’s spent the year in the ECHL playing with the Kalamazoo Wings.

As for the conditions on the picks, there were many of them. However, because the Penguins qualified for the 2016 postseason, the one that kicked in reads as such (according to Sportsnet): If Pittsburgh qualifies for the 2016 post-season, Toronto will receive the Penguins’ 2016 first-round draft pick; and the Penguins will receive Toronto’s 2016 second-round selection. The second-round pick would be the one Toronto originally acquired from Pittsburgh for Daniel Winnik earlier this year. 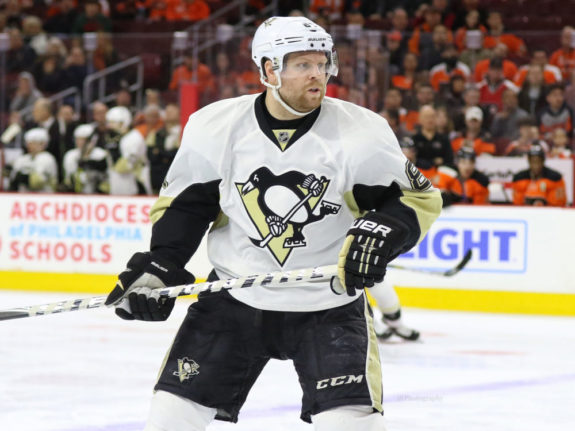 The Penguins turned Nick Spaling around and used him to get Phil Kessel. (Amy Irvin / The Hockey Writers)

While the Penguins did have to give up a first-round pick (eventually traded to Anaheim who took Sam Steel) in the 2016 draft along with Kapanen, they did get their hands on Kessel – a key part of their Cup winning team from the 2015-16 season.

In two seasons with the Pens, Kessel has played all 164 regular season games. Over that span he’s notched 49 goals and 129 points a little under his per-game averages in Toronto. In back-to-back playoffs, he’s also added 42 points in 47 games for the Penguins including 22 in 24 games on their way to the Stanley Cup in 2015-16.

Picking a Winner – Predators or Penguins?

If you look at this trade for face value, there’s no clear cut winner. The Preds got their value in Neal and the Penguins can’t be disappointed with how Hornqvist has worked out over the past two seasons.

But when you delve deeper into how the Penguins turned the extra piece into a trade that landed them Kessel, it’s hard to argue who came out on top of this 2014 trade.

The Penguins have won a Stanley Cup since the trade and got to the Cup Final in consecutive years. Now, we have the chance to watch the two clubs take on one another with Neal and Hornqvist an underlying story in the series.

While the outcome won’t change the overall perception of this trade, it could make for an interesting discussion down the road. For now, the crown should be handed to the Penguins in this deal.

The Good News for Panthers Despite Huge Bobrovsky Deal

From THW to the NWHL: Allie LaCombe’s Wild & Winding Road