This is my final column of the 2014-15 season — a collection of notes inspired by the format of Elliotte Friedman‘s 30 Thoughts column on Sportsnet. Thanks to all for reading and for your support this year.

Θ  Sidney Crosby finished with just 20 minutes of ice time in the Penguins’ Game 4 overtime loss. He had only 11 minutes through two periods. Hard to believe. What’s even harder to believe is that Game 4 was the first game all series that Crosby reached 20 minutes. The Penguins’ only chance for success in this series was going to come from Crosby carrying the team on his back and he hasn’t shown any signs of tiring. Coach Mike Johnston should’ve had Crosby on the ice at every opportunity in what was a must-win game for Pittsburgh.

Θ  This series has featured the most determined version of Crosby we’ve seen in years but also the most visibly frustrated…at his own teammates. Crosby went intentionally offside in Game 1 after not receiving a pass from Rob Scuderi. He quit on a powerplay and casually glided to the bench in Game 3 after Patric Hornqvist shot a puck from the goal-line. Crosby wanted this series badly but isn’t thrilled with the lack of talent around him. Embarrassing teammates and pouting in playoff games doesn’t win points in the locker room though.

Θ  Injuries have been a huge factor in the Penguins’ struggles this year. No doubt about it. I don’t think that absolves all sins though. A few weeks ago, a radio host in Canada — unfortunately I can’t remember who it was — said that the “Penguins dumbed themselves down at the trade deadline.” The more I think about it, the more that phrase is an appropriate synopsis.

Let’s recap. GM Jim Rutherford traded away James Neal at last year’s draft and created a scoring void on his roster. He acknowledged that void and said he had a plan in place to bring in a top-six winger via free agency. Obviously, that plan didn’t work out. Pascal Dupuis was then ruled out for the season. David Perron was brought in to effectively fill Dupuis’ void, but the initial scoring winger hole was never filled by Rutherford. Instead, he added Daniel Winnik, Ben Lovejoy, and Ian Cole at the deadline. Decent depth players but no one capable of changing the complexion of a series.

Is it really a surprise the Penguins are struggling to score? The forward group includes Crosby, Malkin, and a six-pack of players who all crash the net hard but have limited offensive abilities.

Θ  The Penguins had at least one significant package (involving multiple roster players) on the table the weekend before the deadline but the deal didn’t come to fruition. I don’t know who the player was coming back to Pittsburgh. Maybe that elusive top-six winger? I’m sure we’d be surprised at how often this happens in the NHL.

Θ  After watching Anaheim sweep a very good Winnipeg Jets squad this week, I wonder what impact Ryan Kesler would’ve had on the Penguins. I thought Kesler made a ton of sense for Pittsburgh last trade deadline. He’s been fantastic in a second-line center role behind Ryan Getzlaf in Anaheim.

Θ  I also wonder about the future of Pittsburgh’s front office setup.  Leftovers from the Ray Shero regime, a trusted advisor from Rutherford’s failed Carolina campaign, assistant coaches supposedly hired before the head coach, and reports of everything from miscommunication to dysfunction. Not to mention Rutherford’s vulgar and embarrassing confrontation this week with Rob Rossi of the Tribune-Review. Will this offseason allow Rutherford to relax and execute his true vision or simply dig the hole deeper?

Θ  You would think Rutherford regrets the Rossi incident. I have no idea if Rossi regrets writing the emotionally charged column.  But I agree with Rossi’s first line: crisis reveals true character. The Penguins franchise has peaked and might already be on the decline.  Depending on how the summer plays out, playoffs are far from a guarantee next season with divisional teams like Columbus on the rise.  The Rossi incident wasn’t the first of its kind this season and probably won’t be the last. I don’t expect Rutherford or Johnston to be back next season but new faces won’t relieve the pressure on this franchise that was once blessed with such promise.

Θ  One of the biggest criticisms of Rutherford has been his ‘salary cap mismanagement’ that led to the Penguins playing with only five defensemen late in the year. Yes, Rutherford spent every dollar he could find on trade deadline acquisitions but I don’t think that was necessarily the problem. The CBA gives teams an opportunity to make emergency recalls in the event of a situation like the Penguins experienced: losing multiple defensemen at once late in the season with no cap space available for replacements. Rutherford’s major error was having the wrong kind of contracts on his roster — too many forwards that couldn’t be demoted to the minors and not enough cheap (under $650k) minor-league defensemen eligible for emergency recall.

Θ  Did I envision the potential for a salary cap crisis at the deadline? Nope. I’m also not paid millions of dollars to navigate the CBA. Associate GM Jason Botterill played a big salary cap role under Shero but I’m not sure what the arrangement is under Rutherford. I was told yesterday, by someone who has covered Rutherford for years, that the GM is a bit of a lone wolf and “very much his own man.”  Either way, Rutherford’s first experience managing a team at the salary cap ceiling was not what we’ve come to expect from a Penguins franchise that has always been savvy in the cap era.

Θ  After Game 2 I said that rookie defenseman Brian Dumoulin was in over his head. It’s only fair that I give him praise after his performance in Games 3 and 4. Dumoulin was the Penguins’ best defenseman on Wednesday night. Pittsburgh doesn’t have much in the way of draft picks to use for tradeable assets but they still have a great crop of young defensemen ready for NHL hockey.

Θ  Paul Martin has been arguably Pittsburgh’s only consistent NHL-caliber defenseman over the last month but he lost two critical battles on the Rangers goals in Game 4. Martin has been racking up massive minutes and it’s finally catching up to him. He’ll likely depart in free agency this summer. There has been mutual interest between Martin and Los Angeles in the past and I’d imagine that’s where he ends up. The Kings are in a bit of a bind with Slava Voynov‘s trial, now scheduled for July 6, taking place after the start of free agency. I’d imagine the Kings will sign Martin anyway — teams can exceed the cap by ten percent in the offseason — and then sort everything out later in the summer.

Θ  Pittsburgh’s penalty-killing unit has been great in this series, led by big contributions from Winnik and Max Lapierre. The Penguins have always been strong on the penalty kill but this year I’m noticing a lot more blocked shots than usual. Former coach Dan Bylsma didn’t believe in blocking shots. The revised strategy has frustrated the Rangers into passing aimlessly around the perimeter. 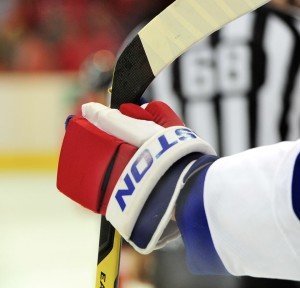 Θ  The Penguins aren’t the only team blocking shots. They were maybe the only team that wasn’t doing so. The Rangers notoriously blocked every shot possible under former coach John Tortorella’s reign from 2009 to 2013. I covered the 2010 Winter Classic between New York and Philadelphia and one afternoon practice I noticed something odd on the Rangers’ gloves. The picture to the right shows what seemed to be a reinforced red panel on the front of the glove (and here’s what a normal glove looks like).

That same year, Patrice Bergeron suffered a concussion in the playoffs and hardly missed any time after modifying his helmet with reinforced Kevlar pads.  The league frowns upon equipment modifications (especially with helmets, now that they’re in the midst of concussion lawsuits) but don’t fool yourself — NHL players really are dressing themselves in battle armor. They can’t protect against every 90mph slap shot but if a clear plastic skate wrap means the difference between a bruise and a fractured ankle, you can be sure that playoff warriors are going to suit up in as many layers as possible.