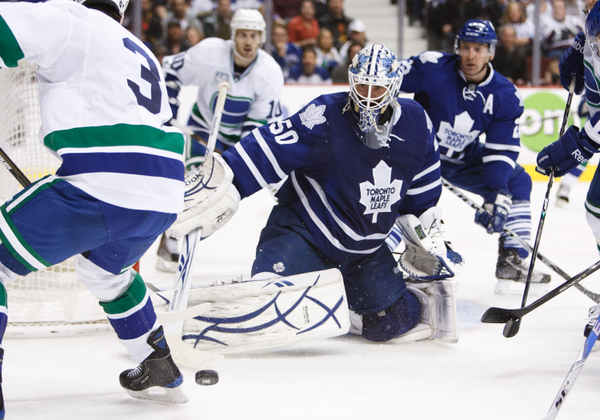 Just one week after having his negotiating rights traded from Toronto to Winnipeg, goaltender Jonas Gustavsson hit the open free agent market at noon on Sunday. 40 minutes later he was off the table, signing a two-year $3 million deal with the Detroit Red Wings.

The move bolsters Detroit’s weak (but ever-strengthening) goaltending crop significantly, providing the team with a viable backup option behind definitive starter Jimmy Howard, but that’s not to say Gustavsson doesn’t come with his fair share of question marks attached.

At 27 years old, the man nicknamed “The Monster” has spent just 3 seasons in the NHL, posting an unimpressive .900 save percentage, 2.58 goals against average, 39 wins, and 5 shutouts in 107 games. However, it’s important to remember that every one of those games came while playing for the Toronto Maple Leafs under the direction of goaltending coach Francios Allaire, something that The Goalie Guild’s Justin Goldman believes will make all the difference.

Gustavsson outside of Allaire system, on a team that can score at will? He's going to display way more confidence, and he's going to thrive.

Gustavsson apparently feels the same way. He offered up these quips to TSN, as relayed by Kukla’s Korner’s George Malik.

Gustavsson on TSN: A tough choice to make. Gustavsson says his goal is to come to a team where he feels he can keep developing…

The Wings can give him that chance, a good team is always better, and Detroit always has a chance to win, but his biggest issue was…

That he wanted to keep developing and that's what will happen in Detroit. gustavsson says he wanted to win and not doing that in Toronto…

Was difficult, biggest disappointment in TO was not making playoffs, but TO cared for him, helped him a lot, he thanks them for that…

Gustavsson will now get the opportunity to help a team that’s made the playoffs for 21 consecutive seasons extend their streak to 22, a stark difference from playing on a Leafs team that hasn’t found its way to the postseason since the lockout.

While the Wings offer Gustavsson a more secure chance for success, he offers them something too: More reliable insurance between the pipes, in theory at least.

Veteran Joey MacDonald stole the backup role from Ty Conklin last season and appeared poised to retain that position heading into 2012-13, but that was called into question after a back injury sidelined the 32-year-old for the end of the regular season and playoffs. The fact that back issues have plagued MacDonald for a number of years was a reasonable cause for concern for the Red Wings (despite his belief that he’ll be ready to go come training camp), and likely what prompted this move. Yet it’s not as if Gustavsson doesn’t bring in health questions of his own.

“Gustavsson, who earned $1.35 million last season, has had heart issues since joining the league.

His heart issues were first noticed on the first day of training camp where his condition required an ablation surgery process.

In 2009, he had a heart murmur, which led to a second ablation surgery.

In 2011, he was pulled from a conditioning stint with the Toronto Marlies due to an accelerated heart beat and two days later he had a third minor heart ablation surgery.”

The Red Wings must feel those troubles are behind him (Gustavsson does), or are at least willing to take a gamble on a player once widely coveted.

And it is a bit of a gamble, but a guy who boasts saves like this in his repertoire obviously has talent, and it could very well blossom in Detroit.

This is a move that I felt should have been made back at the trade deadline, and one that I’ll take a “better late than never” approach to now.

Joey MacDonald is not, and never was, an adequate backup option. The Red Wings desperately needed an upgrade behind Jimmy Howard, and now they’ve got one. Not only does this provide them with the ability to give Jimmy Howard more rest, some feel Gustavsson could even push Howard for the starting spot. Gustavsson himself said he hopes to become a starting goalie someday.

“But of course everyone wants to play, that’s why you play hockey. That’s my long term goal, to become the goalie that plays a lot of games and helps the team that way. I haven’t thought about how many games I’m going to play. I’m going to push myself and push Jimmy and hopefully we’ll have success from that.”

In addition to the immediate assistance Gustavsson provides, it’s also a potential long-term insurance plan. The Red Wings are suffering from a lack of talented goaltending prospects, and while 2010 draft pick Petr Mrazek and this year’s 3rd round selection Jake Paterson will hopefully continue to develop into NHL caliber netminders, we  all witnessed what can happen to highly touted goaltending talent with Tomas McCollum (former 30th overall pick, now likely fighting for a spot in the AHL).

As Chuck Pleiness points out, the move could give them some insurance in another way too.

“The two-year deal gives the Wings a bit of an insurance policy if they have trouble signing Jimmy Howard, who will be an unrestricted free agent next season. Howard will make $2.25 million this season.”

I don’t believe the Wings will have trouble resigning Howard, a player who feels the franchise sells itself, but stranger things have happened.

At the end of the day this signing is an affordable gamble. $1.5 million a year is a fair price for a backup goalie with Gustavsson’s talents, and should he continue to develop like many (and he) believe he can, it could be a bargain deal.